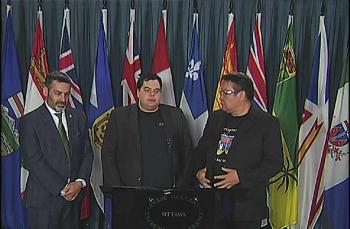 “The commissioner (chair) Jean-Pierre Blais was in a conflict. He should have excused himself from the process.” — Wawatay President Mike Metatawabin. “

Wawatay Native Communications Society will appeal a decision by the Canadian Radio-television and Telecommunication Commission (Broadcasting Decision CRTC 2017-198) which denied its application on to two Indigenous radio licences for Ottawa and Toronto. The society has 30 days from the June 14 decision and are seeking the support of Members of Parliament and the public.

The society cites bias on the part of the commission, failure to consult with the Indigenous peoples of Ontario, and for ignoring a letter from the Chiefs of Ontario which pledged unanimous support of Wawatay to receive the licenses.

The commission instead granted the licenses to First Peoples Radio Inc., a company owned and operated by the Aboriginal Peoples Television Network, which is headquartered in Winnipeg.

At a press conference in Ottawa today, Wawatay representatives communicated that they didn’t think the CRTC decision was a fair one.

“The commissioner (chair) Jean-Pierre Blais was in a conflict,” said Wawatay President Mike Metatawabin. “He should have excused himself from the process” because he had publicly stated that he was a founder in creating APTN.

“How can that be a fair process when the commissioner stated publicly that he was in favor, the creator of Aboriginal Peoples Television?”

Metatawabin asked for understanding and support to reverse the CRTC’s decision. And insisted that Wawatay was experienced in the work at hand having been involved in providing radio services to northern Ontario for many decades, including providing Indigenous language over the air waves.

One of the issues raised in the CRTC decision was Wawatay’s funding model. Asked would Wawatay make adjustments to that aspect of their application, should the decision be set back for review, CEO John Gagnon said Wawatay already has existing infrastructure in Ontario. He believed all Wawatay would need is an antenna, a transmitter and a computer to connect to one of their studios in the north to get started.

But, the CEO said money didn’t have a major bearing on the application process. It was more about the social impacts and benefits of the radio stations.

“We thought it kind of odd that the money card was played,” he said.

Gagnon said Wawatay was honored to have the backing of their community for the application.

The CEO said he wanted a swift resolution to the matter, either through an appeal of the CRTC decision or by starting over with “a fair proceeding with an unbiased commission.”