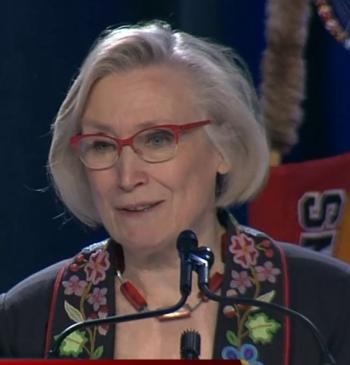 “When young people have a secure personal cultural identity, they have better health, education and economic outcomes.” –Carolyn Bennett, Minister of Crown-Indigenous Relations

Members from the NDP, Conservative, and Green parties and Bloc Quebecois applauded both the Liberal government in a solid step toward reconciliation and the Anishinabek Nation for negotiating the agreement.

Anthony Rota, assistant deputy chair of the committee of the whole, praised all parties for coming together in “this place (that) is not necessarily known for cooperation and complementary work.”

The Anishinabek Nation Education Agreement, signed by 23 of the 39 Anishinabek Nations in Ontario, creates a system designed by the Anishinabek to deliver culturally-relevant and community-tailored education programs and services for the benefit of current and future generations of Anishinabek students. This includes promoting Anishinaabe culture and language. The remaining First Nations may sign on at a later date.

“The best parts I think of this whole system is that it’s really truly community driven,” said Grand Council Chief Patrick Madahbee, when he was joined by Crown-Indigenous Relations and Northern Affairs Minister Carolyn Bennett. They spoke prior to the bill being discussed in the House of Commons. “We have representation from each First Nation (that) sits on the steering committee that will direct the Education Authority.”

Madahbee also noted that a memorandum of understanding had been signed with the Ontario government for a reciprocal tuition agreement and to build capacity in Ontario schools as many Anishinabek students have to leave their home communities to attend school.

“When young people have a secure personal cultural identity, they have better health, education and economic outcomes. For these young people to be proud to be Anishinabek is the most powerful antidote that we have to racism and ignorance in this country,” said Bennett in the House.

Christine Moore, NDP MP for Abitibi-Temiscamingue, spoke passionately about the benefits she has seen in Indigenous schools in her Quebec riding.

Moore, along with Conservative MP Cathy McLeod, both held that 20 years was too long to negotiate such an agreement. Moore asked Bennett if a process had been established that would decrease the time span for such an achievement.

Bennett said that the agreement could act as a template for other First Nations interested in pursuing their own educational authorities.

Marilene Gill, Bloc Quebecois MP for Manicouagan, said it was important that the federal government own up to its fiscal responsibilities and provide adequate funding for education, noting that Ottawa has continually underfunded education on reserves.

The change-over in education authority is expected to come into effect April 1, 2018, said Madahbee.