MMIWG inquiry will hear Amber's family in Edmonton in November 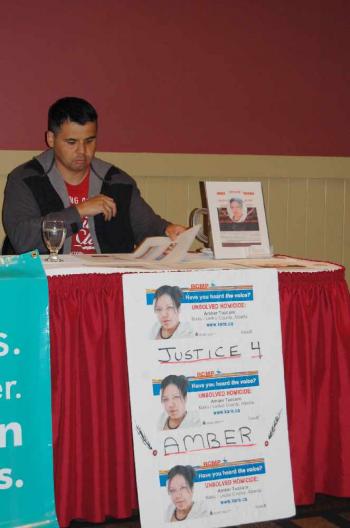 Amber Alyssa Tuccaro’s family will be able to speak out for her when the national inquiry for Missing and Murdered Indigenous Women and Girls comes to Edmonton in November.

Paul Tuccaro, brother to Amber, met with the inquiry team Tuesday and was assured his sister would be included. He had been told by previous inquiry personnel that Amber’s story might remain unheard as the case is still open.

Amber, 20, was reported missing seven years ago by her mother. Her body was found five years ago in a field near Leduc. No one has been charged with her murder.

“I think because I spoke to so many different people there was some confusion, but I got that cleared up today. She was included all along.  It was just that the people had told me that (she might not be included) in the past, they’re no longer there,” said Tuccaro.

On Monday afternoon, Tuccaro met with reporters and expressed concerns with the inquiry process, as well as how the RCMP had handled and continued to handle his sister’s case.

He also announced that his family would be adding an undisclosed amount of money to an existing $5,000 reward leading to the arrest and conviction of Amber’s murderer.

Tuccaro says the two-hour meeting he had with the inquiry team today went well.

“They took the time to talk to me. They explained the whole process. They answered all my questions. They listened to me…. They were respectful. They kept reminding me what it was about and that everybody was important,” he said.

Tuccaro says he’s cautiously optimistic going forward that the inquiry could play a role in his family’s goal to get justice for Amber.

“Time will tell, I guess,” he said. “You never know, right? I expressed to them it was good we were talking here right now, but what’s to say that next week there might be new people in place? But as long as what I’m told here is documented and going forward that process is going to be followed and what my family is being told is going to be followed through regardless if it’s the same people and if it’s not we’re not going to have to start all over again.”

Tuccaro has already been burned once. In April he was set to meet with national inquiry during a regional advisory meeting planned for Edmonton. That meeting was cancelled as the national inquiry regrouped to make changes in its process.

Tuccaro is uncertain which of his family members will be meeting with the commissioners in November. He says it is a family decision that still has to be made. However, he was assured by the inquiry team that there were no restrictions as to how many members could make the trip from Fort Chipewyan and that the national inquiry would pick up the costs.

Tuccaro received band help to make the trip to Edmonton this week, as the national inquiry would not foot the bill for community meetings.

The inquiry team will be in Edmonton for two more days meeting with family members and survivors.

In a previous interview with Windspeaker.com, Melissa Carlick, community liaison officer with the MMIWG national inquiry, said the Edmonton schedule was almost full.