Métis Mutt to challenge Toronto audiences on their too-comfortable stereotypes 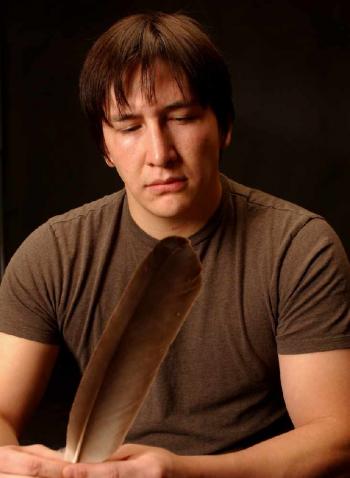 Comedic, heartbreaking and unpredictable, Métis Mutt is a semi-autobiographical performance piece that recounts the journey of a young Métis man finding his way out of a destructive cycle.

It started as a school project, Elter told CFWE FM’s Jeremy Harpe. “It’s basically about my journey as a stand-up comedian when I was 18 and 19,” he said.

The show was written in 2001, and was performed at the Edmonton Fringe in 2002. Elter sold out every show and won some awards “and next thing you know I was travelling all over the world… so it’s kind of nice to take it to Toronto.”

The show opens with stand-up comedy that turns racially ugly, “which forces the audience to question what is it that their really laughing at,” said Elter.

It then switches to earlier days, getting bullied by white kids “and Native kids, ‘cause I wasn’t Native enough.”

It talks about Elter’s own abuse of drugs and alcohol, a father that was an abusive alcoholic, and how all of that informed his comedy.

Elter says Métis Mutt will challenge people’s cultural stereotypes and what people are comfortable with saying and joking about.

It’s “a really cool company, and their probably one of the most prominent Indigenous theatre companies in the country, so I’m just pretty excited to be part of their season.”

The award-winning Métis actor, writer, stand-up comic, musician and director, has been recognized for his work as a playwright and performer. He’s earned two Sterling Awards for Métis Mutt and several other nominations for outstanding performance.

His recent work, Delmer & Marta, had been seen on APTN, but he told CFWE that the show had been cancelled, but he had some good news to share too about his association with APTN.

Listen to the full interview here and hear the exciting news for yourself: https://youtu.be/GJteG20-Ey8

Elter was also a Top 14 Finalist on Canadian Idol. He is a core-member of the ukulele rock band sensation, The Be Arthurs.

Elter, originally from Northern Alberta, is currently based in Edmonton.