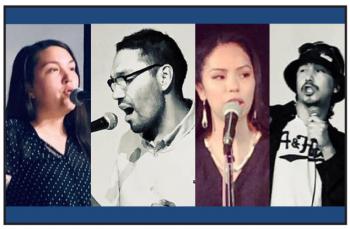 “Spoken word allows for a lot of discussions to happen in a safe environment.” —Kevin Wesaquate, the founder and coach of Prairie Fire, an all-Indigenous spoken word team.
By Sam Laskaris
Windspeaker.com Contributor
SASKATOON

Prairie Fire is the first all-Indigenous team that will compete at the flagship event for poetry slam in Canada.

The national festival, which has been held annually in Canada since 2004, will begin on Oct. 13 and continue until Oct. 19 in Guelph, Ont.

Prairie Fire will be represented by four competitors at the Canadian festival. All four are members of the Saskatoon Indigenous Poets’ Society.

Kevin Wesaquate, the founder of the Saskatoon group, will also travel to Guelph and serve as the team’s coach.

“I think it’s really exciting to think that you’re making national history,” said Prairie Fire team member Alexandra Jarrett, who goes by the stage name of Axis when she is performing.

“It’s a defining moment. And hopefully we can inspire other Indigenous talent to step up.”

Teams can have a maximum of four performers at a poetry slam competition. Prairie Fire’s lineup at the national festival will also include Keccia Cook, Alex Alary and Shawn Joseph.

All four team members are Cree.

Jarrett, a 29-year-old who is a member of Saskatchewan’s Canoe Lake Cree First Nation, said her side has a lofty expectation for the national festival.

“We’re going there to win,” she said.

But Jarrett admits she has limited knowledge of most of the other entrants. There are 18 teams expected to participate.

“I only really know about one other team that is going,” she said.

That would be another Saskatoon-based team dubbed Tonight It’s Poetry. That team’s lineup will include Janelle Pewapsconias, who is also a member of the Saskatoon Indigenous Poets’ Society.

“There will be sprinkles of Indigenous talent on teams from all across Canada,” Jarrett said. “But we are the only all-Indigenous team.”

The Canadian Festival of Spoken Word is one of three national events organized annually by Spoken Word Canada, a group which is more commonly called SpoCan.

The inaugural national spoken word festival in 2004 was called Wordlympics. It changed its name to the Canadian Festival of Spoken Word the following year.

This year those events were held in Vancouver in May and in Toronto in August, respectively.

Wesaquate believes Prairie Fire will be well received by all of the other competing teams.

“I think it’s about community building,” he said of the event. “Spoken word allows for a lot of discussions to happen in a safe environment.”

Prairie Fire team members plan to promote Saskatchewan’s Indigenous culture and literature in their performances at the national festival.

Jarrett will perform Generation XYZ, a story told from the perspective of trees, for her first piece at the Guelph event.

Like Jarrett, Wesaquate understands the significance of having an all-Indigenous team participate at the national festival for the first time.

“This is huge,” said Wesaquate, a 42-year-old Cree who is a member of Piapot First Nation.

Spoken word performers are judged on various criteria including originality and entertainment value. Entrants are not allowed to use props or plagiarize other work.

All four Prairie Fire members will be performing individual pieces, lasting a maximum of three minutes each in the opening round of the national festival. All entrants must also perform a team piece featuring all of those in its lineup.

Those that advance to the second and subsequent rounds must perform new material for each round.

Though Prairie Fire is the only Indigenous poetry slam team competing at the Canadian festival, there is at least one other all-Indigenous side in the country now.

“Edmonton has started a group and I think Winnipeg is going to start one as well,” Wesaquate said.

Besides coaching Prairie Fire at the Canadian festival, Wesaquate will also lead a workshop titled Storytelling through Indigenous Concepts.

The workshop will engage others to discover identity via Indigenous storytelling and protocols that exist with Indigenous concepts.

During his workshop Wesaquate will also discuss how it is necessary to have spoken word available to Indigenous communities.

“In my opinion there needs to be a movement towards empowerment,” he said. “A lot of youth are jumping onto that.”

Members of Prairie Fire are currently fundraising for their trip to Guelph. Flights and accommodations for the team are expected to cost a total of about $6,000.

As of this weekend, the team had raised about half of that money.