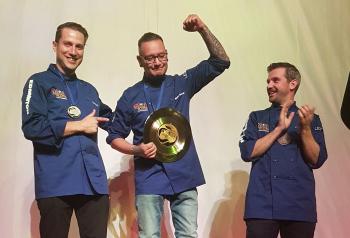 Shane Chartrand, executive chef of Sage at the River Cree Resort & Casino at the top of his game.

With files from Jeremy Harpe of CFWE-FM

From truck stop to Gold Medal Plates, Shane Chartrand, executive chef of Sage at the River Cree Resort & Casino, has come out on top, winning the Golden Plate in Edmonton Oct. 12 on the road to the Canadian Culinary Championships to be held in Kelowna in February.

Chartrand had declared that this would be his final year participating in the Gold Medal Plates. He had previously won silver and two bronze plates. This year, not only did Chartrand win, but he also did it in style, compiling the largest margin of victory—10 per cent—in the history of the Edmonton competition. He received a standing ovation.

The Canadian Culinary Championships are made up of finalists from Gold Medal Plates, where each city brings together 10 chefs to compete for a place in the finals.  Each chef makes a single dish of whatever they each want to make. They send out about 700 to 800 portions, not only for the judges to taste, but also the public. The dishes are scored on such things as ‘wow factor’, presentation, flavor, and texture.

“We really worked extremely hard to create a dish that was mindful and timeless, and we pulled it off,” Chartrand told Jeremy Harpe of CFWE-FM.

Chartrand’s dish was described as a visual stunner. It was titled “Effects of Red.”

He began the plating by putting five dots of red plum sauce onto the plate; then he turned the plate on its edge so the droplets of sauce became red streaks a few inches long. Then came larger dots of a rich and tasty almond-and-parsnip custard, scarlet balls of red-wine-poached pear, and slim coins of beet-stained, salted rutabaga. Against these rooty, fruity background flavours he set his two proteins – little rectangles of a dense but juicy terrine of pheasant breast enriched with pork neck fat, and beside them tiny drums of foie gras torchon, sprayed with a mixture of beet juice and cognac to perpetuate the “red” theme. Finishing touches were shards of black coral gami, like dark crimson snippets of lace but as crisp as melba toast, made by frying a watery batter on a very hot surface.

Chartrand paired the dish with a 2015 Tantalus Pinot Noir.

Asked his reaction to winning, Chartrand said “Well, I was pretty tired. I’m not going to lie to you.” The win didn’t sink in until the next day, he said. “I was just exhausted. We were loading the truck at 10 o’clock in the morning. We were doing practises at two in the afternoon. It was such a long day.

“But there was no doubt, I was excited for sure.”

Chartrand (Metis-Cree) grew up on a farm around the Penhold, Alta. area, and his mother encouraged (told) him to get a job if he wanted to buy the stuff he wanted. His first job was in a truck stop.

Asked his advice for up and comers, Chartrand said “If you stick with it and you make it, trust me, you’ll make a name quick enough.”

He says his fun goal for his career would be a shot on TV on “Beat Bobby Flay.” On a serious note, he wants to keep going down the Indigenous path he’s been on, raising awareness of Aboriginal food and to keep talking with the RedX group, an opportunity he had this summer as part of the World Indigenous Games in Edmonton.