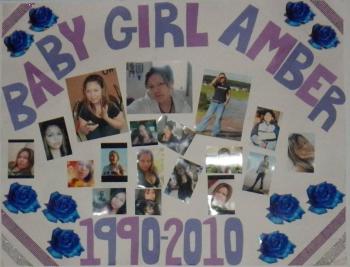 Every memorial round dance held for Amber Tuccaro has been difficult, but this one is particularly heart-breaking, says the slain woman's mother.
“This one is really overwhelming. I’m having a really hard time with it. I‘m not saying any of the other ones have been any easier. This one, I’m really struggling, probably because it’s the final one. It’s been really hard on me in so many ways,” said Vivian Tuccaro.
According to her tradition, memorials number four.
February 11 will mark the last time family, friends and community will gather at Memorial Hall in Fort Chipewyan to celebrate Amber's life. There will be a pipe ceremony, a traditional feast and a prayer chain for justice.

The young Mikisew Cree woman, who lived in Fort McMurray, had travelled to Edmonton with her son and a friend. Amber was last seen Aug. 18, 2010 in Nisku, Alta. Two years later, her body was found in a field east of Leduc.

No one has been charged in her murder. She was 20. Her son, Jacob, was 14 months old at the time.

“It’s important to celebrate Amber’s life, share stories, memories, just to get together with family and friends,” said Vivian.
The investigation into Amber’s death by the historical homicide unit is ongoing, says Cpl. Hal Turnbull, spokesperson with the RCMP. As such, he couldn't release any details publicly.

“The investigators do update the family,” he said.

Turnbull was unaware if the unit would be undertaking a new public appeal, or any other specific investigative strategies at this point.
Amber’s body was one of three women’s bodies found in that general area over a 12-year period. The remains of Katie Sylvia Ballantyne, 40, was recovered July 7, 2003, two months after she was reported missing. The remains of Delores Brower, 32, were unearthed April 19, 2015. She had last been seen May 12, 2004.

RCMP say the remains of all three Indigenous women were within an eight kilometre radius. No charges have been laid in the other two deaths either.
Late in 2012 the RCMP released a recording of a cellphone conversation that took place between Amber and a third party. It indicated a man, who had picked Amber up as she was hitchhiking to Edmonton, trying to convince her they were headed in the right direction.

“Every now and then (the RCMP) get tips on people calling in saying they think they know the person, the voice on the recording, but no one yet,” said Vivian. “There’s no new leads. Nothing.”
She says the RCMP made a trip to Fort Chipewyan in December to update her family and they remain in contact over the telephone.

“I just call for updates,” she said, adding that Project KARE, which supports the historical homicide unit, has been supportive.

Vivian is anxious for the commission on murdered and missing Indigenous women and girls to get underway. They have only been “lip service” to this point, she says.

The five commissioners, appointed in August 2016, have yet to hold a hearing or set a date or place for the first hearing.

And earlier this week the commission announced that families had to contact them in order to be heard.

“(The commission) already knows who’s missing and murdered. If they want to have this inquiry, they have the names and that. There’s a lot of people who can’t speak for themselves or they’re in an isolated community and don’t have access to the Internet. Reach out to those families that can’t reach out for themselves,” she said.

Vivian’s eldest son has registered the family to speak with the commission.

“I’m going to be Amber’s voice for as long as I live. If I can give strength, help another family just by me doing these things, I’m going to continue for sure,” said Vivian.