Conflict in the heart as Amber Tuccaro death remains unsolved 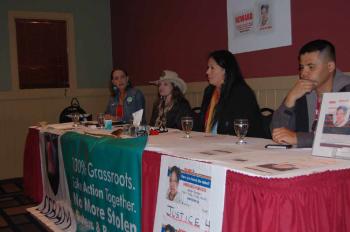 Anger at the RCMP and lack of confidence in the Missing and Murdered Indigenous Women and Girls national inquiry war for dominance in Paul Tuccaro.

Almost seven years since her disappearance, the RCMP have named no one as a person of interest.

Tuccaro says his family is ramping up their push to get Amber’s name out there because they are hoping that with the MMIWG national inquiry team scheduled to be in Edmonton this week, more tips may surface.

To that end, the Tuccaro family has added more funds – an undisclosed amount – to the $5,000 reward for information leading to the arrest and conviction of Amber’s murderer.

Tuccaro says his family has been getting tips and passing them along to the RCMP, but the RCMP has not been updating the family as to the outcome of those tips.

But Tuccaro takes little comfort from the MMIWG team having three days of community meetings scheduled for Edmonton. He says he is still unclear as to whether his sister’s case falls within the inquiry’s mandate.

“We were told because my sister’s case is ongoing, her story may not be included in the inquiry and we’re like, ‘Why not?’

“It upsets the whole family. Because you’ve got all these women that are missing, the majority of them cases are ongoing but yet they’re included. Yet, my sister, they said, they have to check with their legal team to see if she can be included. To date we still haven’t’ been given a definitive answer as to whether she’ll be included or not,” said Tuccaro.

He received no financial aid from the national inquiry to make the trip from his home town of Fort Chipewyan to Edmonton to attend the meeting. His band pitched in, he says. He is also unclear if his family gets the go-ahead to present to the inquiry commissioners in November when they are in Edmonton, if financial aid will be forthcoming for that trip.

But lack of support from the government won’t stop him, says Tuccaro.

“We owe it to my sister and all the other women who went missing,” he said.

Tuccaro’s feelings are shared by many. He was joined at a press conference Monday afternoon by April Eve Wiberg, founder of Stolen Sisters and Brothers Awareness Movement; Muriel Stanley Venne, founder and president of the Institute for the Advancement of Aboriginal Women; and Rhonda Spence, activist and advocate with the MMIWG movement.

Wiberg noted that the RCMP KARE unit was invited, but turned down the invitation.

“Justice must be served,” said Spence. “There is somebody out there who is stealing our women and the family needs closure, the family needs to be able to heal. But how do we heal when there’s no justice for our loved ones?”

Stanley Venne has little faith that justice will come from the RCMP until it “looks at how it is policing this country.”

Tuccaro’s story of mishandled evidence and questionable RCMP tactics — which saw a taped conversation between Amber and a man not released until two years after her disappearance —– was one shared by Stephanie Harpe, who came out to support the Tuccaro family.

Harpe’s mother was murdered in 1999 by a man known to the Edmonton Police Service.

“I had to miss my mother’s own funeral to make sure (EPS) was doing their job,” said Harpe. She will be meeting with the MMIWG team on Thursday.

Goose says she is disappointed in the way the national inquiry is rolling out, noting that after having her name on a registration list for months, she was contacted by the national inquiry team last Tuesday, asking her to Skype her story that day as the team was holding community meetings in Yellowknife.