Kateri Tekakwitha, Lily of the Mohawks, and saint 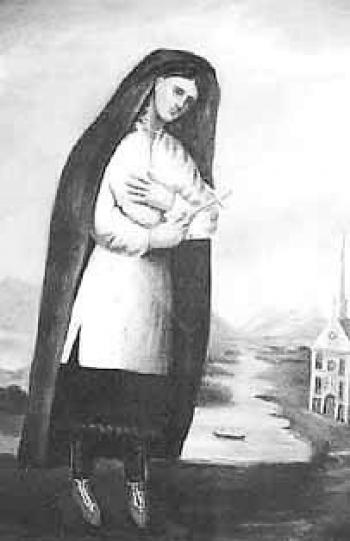 More than 300 years have passed since Kateri Tekakwitha lived her brief life, but even today people across North America look to her for strength and guidance.

Kateri was born in 1656 in Ossernenon, a Mohawk village located near present day Auriesville, New York. Her father was a Mohawk chief; her mother an Algonquin woman who had been captured by the Mohawk. While her father hadn't converted to Christianity, her mother had, and she taught her daughter to pray in the Christian way.

When Kateri was only four, the community was ravaged by smallpox and she was the only member of her family to survive. But while the disease didn't claim her life, it did take its toll on the young girl. She was left weakened and was covered in terrible scars.

The disease had also affected her eyesight, and she was given the name Tekakwitha, which means "she who stumbles into things." She was adopted by her father's brother, who assumed the role of chief.

Kateri was born at a time and place where living as a Christian was difficult. Many Mohawks distrusted the Jesuit missionaries who came among them, blaming them for bringing the sickness that spread through their communities. Mohawk opposition to Christianity was strengthened by politics. This new religion found support among the Hurons, who were enemies of the Mohawks and the missionaries working to bring their religion to the region, the French Jesuits.

The Mohawk had aligned themselves with the English and Dutch. A number of missionaries had been killed by the Mohawks at Ossernenon, the last in 1646, just 10 years before Kateri was born.

Following the smallpox epidemic that claimed so many lives, Kateri and her people abandoned Ossernenon and settled across the Mohawk River at Caughnawaga, near present day Fonda, New York. Despite the physical toll smallpox had taken on her, Kateri was a hard worker and her adoptive parents had high hopes for finding her a good husband who could support them in their old age. Kateri, however, had other plans, and showed no interest in marriage.

When French missionaries visited the village, Kateri's uncle was their reluctant host. It was during that visit that Kateri chose the path she would follow. Soon after the visit, Jesuit missionary Father Jacques de Lamberville arrived to set up a permanent mission and, although her uncle had forbidden her to speak to the missionaries, an opportunity soon presented itself and Kateri told de Lamberville of her desire to be a Christian. Kateri converted to Christianity in 1676 and was baptized on Easter Sunday. She was given the Christian name Catherine.

Kateri's devotion to her religion was astounding, even to the missionaries she turned to for teaching and guidance in her new faith. She spent as much time as she could in the chapel, spending almost the entire day there on Sundays and holy days.

The fact that she so openly embraced Christianity did not sit well with Kateri's family or other members of the community. People would throw rocks at her as she made her way to chapel, calling her "the Christian." And because she refused to do any work on Sundays, keeping the Sabbath holy, according to Christian practices, on that day her aunts would give her no food.

A story often told about young Kateri demonstrates her commitment to her beliefs. One day, while Kateri was alone in the longhouse, a young man from the community, angry with her because of her beliefs, burst in and threatened to kill her if she did not renounce her religion. As he stood over her, war club in hand, she calmly told him he could take her life, but not her faith. Then she lowered her head and waited for the blow. Her calm and conviction shook the attacker and he fled without harming the girl.

The following year, in an attempt to escape the persecution inflicted upon her because of her beliefs, Kateri fled her village, traveling 200 miles through the wilderness to find refuge in the St. Francis Xavier mission in another community named Caughnawaga—present-day Kahnawake, Que.—populated by Mohawk people who were much more accepting of the religion brought by the Jesuit missionaries. That Christmas, Kateri made her first communion.

Kateri spent much of her time caring for the sick and elderly among her people, and those around her were touched and inspired by her goodness and devotion.

But Kateri herself felt the need to do penance for her weakness and her sins, and this penance was often painful for the young girl.  Not allowing herself even simple comforts, she would mix ashes into her food,and once slept on a bed covered in thorns. At one point she branded herself with hot coals, offering up her suffering to God.

In 1679, she visited a convent in nearby Ville-Marie (now Montreal) and was so impressed with the way the nuns lived their lives that on her return to Caughnawaga she asked to set up her own convent. Her request was refused, but still she chose to take the vow of chastity, which she did on March 25, becoming the first Native American woman to do so.

Then, in the winter of 1679, Kateri's always precarious health began to worsen, a decline that was no doubt hastened by the extreme penances she put herself through. She began suffering from headaches and stomach pains, and her strength dwindled.

For months she was unable to move from her bed. And then on April 17, 1680, at age 24, she received communion for the last time, whispered to those around her that she would remember them in heaven, professed her love to Jesus and the Virgin Mary, and slipped away.

It is said that 15 minutes after her death, the smallpox scars that had marked Kateri for most of her life disappeared completely, replaced by a radiant beauty. Those who witnessed this event believed it was a sign that she was truly special, and felt the transformation occurred at the moment Kateri saw God.

Many people reported seeing visions of Kateri appear to them after her death, and in the years following, many miracles were attributed to her, with gravely ill people being cured by touching the cross she had held on her deathbed, or when given powder that had come from her tomb. Even today, people have claimed miraculous recoveries after praying to Kateri.

Kateri was venerated by Pope Pius XII in 1943; and in 1980, in front of hundreds of Native Americans who traveled to Rome to witness the event, she was beatified by Pope John Paul II, the first Native American to be declared Blessed. In order for her to be canonized and declared a saint, another miracle attributed to Kateri was to be proved. (Editor’s note: After this article was published and upon approving a second miracle, Kateri was canonized by Pope Benedict XVI at Saint Peter's Basilica on Oct. 21, 2012.)

There are shrines to Kateri in the Mohawk Valley—the national Shrine of the North American Martyrs, the national Kateri Shrine on the American side of the border and the Kateri Tekakwitha shrine in Kahnawake, where Kateri's tomb can be found.

Her name also graces a number of schools on both sides of the border, and her name has been adopted by the Tekakwitha Conference, an American-based organization dedicated to unifying Native American Catholics and helping them to find a balance between Catholicism and Native spirituality.

Kateri Tekakwitha, Lily of the Mohawks, is the patron of the environment, people in exile, people ridiculed for their religious beliefs, orphans, and of World Youth Day.

In Canada, the Feast of Kateri Tekakwitha is celebrated on April 17, the anniversary of her death. In the United States, it is commemorated on July 14.