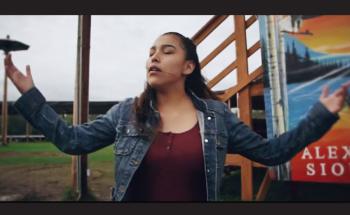 “Life’s going to get hard. It’s going to be hard. It’ll knock you down a million times but you’ve always got to get back up.” — Hazel Waskewitch, 19.
By Shari Narine
Windspeaker.com Contributor

Music has delivered Hazel Waskewitch and she’s hoping it will do the same for her listeners.

“There were times where I felt like giving up, but music helped me. It brought me back up to my feet,” said Waskewitch.

“I just hope my music helps people to make them feel better about themselves, helps them go through what they’re going through.”

Waskewitch, who records under the name Hazely, is getting people to their feet with her first video release of her first single from her first album.

“Feel Free” will launch March 5 on the N'we Jinan Records label. Hazely’s album, All Good Things, which is being pitched as an “R&B powerhouse vocalist fusing acoustic pop melodies and hooks with traditional Indigenous round dance songs”, will follow in June.

The shy 19-year-old penned the lyrics for “Feel Free”, which tells her story from childhood to now. It recounts how she has spent her time “on the road” since eight years of age, traveling between Alexis Nakota Sioux Nation, where her mother lives and where Waskewitch is the youngest of six children, and Onion Lake Cree Nation, where her father lives and where she is the oldest of 12 children.

The video was shot in a single day on the Alexis Nakota Sioux Nation last summer. The field she runs through in the video is located near her grandmother’s house, and the bridge and powwow grounds are featured prominently.

Waskewitch says she had fun filming the video, partly because she felt comfortable with video director Andrei Savu, who she’s known for a couple of years.

As much as she enjoyed the experience of the video, Waskewitch admits she’s “really nervous” about the release of her single, opening herself up to such a wide audience. It’s a huge step to take for a young woman who rarely shares her work with others.

However, as unassuming as Waskewitch is, there was something special about her that made David Hodges choose her as one of six young Indigenous musicians to participate in N'we Jinan’s pilot program for emerging artists.

Hodges had been invited by the RCMP to bring his mobile recording studio to the school as part of a “bridging project” with the community. The school held auditions and Waskewitch was one of the successful students.

“With Hazel she was the first youth I met from that group. We were setting up in the room … and Hazel just walked in the room and she just looks at me, said she was really excited about the opportunity … (says) ‘I want to sing a song for you right away’… and she sings “Feeling Good” by Nina Simone and she goes off and I’m, ‘Wow.’ She says she’s happy she got that off her chest and says, ‘Okay, I’ll see you later’ and she left.

“For me it’s striking when you meet certain individuals that they leave that kind of mark on you. Obviously singing is her passion and right off the bat I recognized that and she had an incredible voice, too,” said Hodges.

Over the course of the week, Hodges came to see another side of Waskewitch where she stayed out of the spotlight and instead worked behind the scenes to raise the confidence of other students.

“I guess she knows that she has a gift, she loves singing and that she’s talented, but … she’s very keen in helping others see value in themselves as well,” said Hodges.

The result of the Onion Lake work was a song and video called “Young and Happy”, which was featured on N’we Jinan Firemakers Volume 7 album in 2019.

The Emerging Artists program is geared towards youth who have graduated or are about to graduate, like Waskewitch. Over five years of providing artistic programming, N'we Jinan has worked with 3,000 Indigenous youth in more than 70 First Nations across Canada.

There are youth who are “exceptional in the artistic realm but there is a lack of support.… There really aren’t those many stepping stones for artists. You have to have your own ambition and figure your way,” he said.

The Emerging Artists program works with the young artists to help define their goals, both life and career, short and long term, and figure out the business aspect of cutting an album. Hodges helps them get government-issued identification and to open bank accounts. He also talks to them about becoming role models and the responsibility and accountability that goes along with that.

“We ask them, ‘What do we need to do to support you to make the right steps so when your album does come out you know the process?’ It’s not just recording an album,’” said Hodges.

A two-year development deal is signed through the program with $5,000 allocated per project. In that time one album is recorded, released and promoted by N’we Jinan. In return, a lifetime percentage of sales is recouped by N’we Jinan and goes back to programming for artistic youth while a majority of the ownership remains with the artist.

“Hazel is one of the artists that we’re actively engaged with, developing and working with her because she does have a talent, but she also has a desire and ambition to do more with her life,” said Hodges.

Waskewitch spent a week in the recording studio in Montreal, where Hodges is based. She spent one day working with Zoey Roy, a Cree-Dene-Metis spoken-word artist and songwriter from Saskatoon, and the two collaborated on one song. Hodges collaborated on the other five songs with Waskewitch, as well as composing the music.

“I enjoyed it. I liked being in the studio,” said Waskewitch.

Waskewitch is also looking forward to setting up her own touring dates.

“When I get on stage I just picture me and my dad together. He’s the one who taught me how to sing, how to play guitar and not to be scared,” she said.

The gift of song is something she shares with her father, mother and grandmother. Her connection to her culture is strong as she is a traditional singer and Jingle Dress dancer. Her song-writing is grounded in spirituality, draws on the togetherness of ceremony, and allows her to find the best words to get her message across.

Her message is to keep on keeping on.

“To people who feel that way, God gave them a life because they’re strong enough to live it, is all I’m going to say. Life’s going to get hard. It’s going to be hard. It’ll knock you down a million times but you’ve always got to get back up,” she said. These are deeply personal words.  “I grew up pretty fast. I went through a lot.”

Waskewitch admits she never thought participating in a mobile recording studio would get her a six-song album, but she’s not ready to say one-and-done.

“Her story is super relatable, and because she has that talent that could also bring that story out. I think she could also become a positive force in that area, which is really needed. So I feel she could have some immediate success locally, and let’s say regionally. A lot of people will be interested because she has a good look,” said Hodges.

“This has been a dream since I was little. I’d be singing everywhere I’d go. Walking on the road. In my room, standing in front of the mirror with a brush,” said Waskewitch.

“I want to keep going… I think I’m going to continue doing music.”