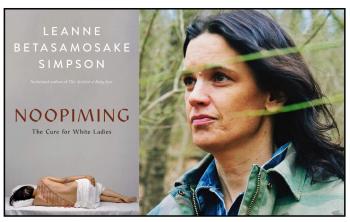 Author Leanne Betasamosake Simpson with the cover of her book titled Noopiming: The Cure for White Ladies, which has received a nomination for the 2020 Governor General Literary Award
By Sam Laskaris
Local Journalism Initiative Reporter
Windspeaker.com

Though pleased to receive recognition, Leanne Betasamosake Simpson is surprised she is in the running for a major writing prize.

Simpson, a member of Alderville First Nation in Ontario, is one of five finalists in the Fiction category for the 2020 Governor General Literary Awards.

Simpson is nominated for her book titled Noopiming: The Cure for White Ladies.

“Noopiming is a book that can be challenging for readers,” Simpson said. “I wasn’t expecting it to make awards lists for that reason.”

The Governor General awards, run by the Canadian Council for the Arts, are one of Canada’s oldest and most prestigious literary awards programs.

The annual awards were first bestowed in 1936. Only winners of categories were announced up until 1979. Since ’79, however, finalists for each category have also been recognized before winners are declared.

Noopiming: The Cure for White Ladies is Simpson’s Indigenous response to Roughing it in the Bush, a book written in 1852 by Susanna Moodie.

“I didn’t dwell on that book,” said Simpson, who lives in Peterborough, Ont. “I wanted to jump into the Anishinaabe beliefs, culture and characters.”

Noopiming is the Anishinaabemowin word for ‘in the bush.’

“It’s not written in a standard structure you would see in a novel,” she said. “And there’s a lot of layering in the book.” And it combines both narrative and poetic segments.

“I was surprised actually,” she said of how well the book was received. “It’s been such a strange year to release a book into the world.”

Simpson’s book came out last September. She said she had spent a total of two years writing Noopiming, with the last six months of fairly intensive writing sessions.

“I really, really enjoyed the writing process of this book,” she said. “And I fell in love with a lot of the characters.”

Simpson is also pleased to see her work is getting recognition.

“It signals that Canadian readers are willing to do extra work and be challenged,” she said.

The opening of Noopiming features the disembodied voice of Mashkawaji, who uses the pronouns they/them, and has fallen through some ice.

From there seven main characters are introduced including Akiwenzii, an elderly man who represents Mashkawaji’s will.

Noopimin is up against two other Indigenous writers who are also finalists in the Fiction category, Michelle Good and Thomas King.

Good, a member of Red Pheasant Cree Nation in Saskatchewan, wrote a book titled Five Little Indians, which is about children who are sent to residential school after being taken away from their families.

King, who lives in Guelph, Ont. and has Cherokee/Greek ancestry, is nominated for his book Indians on Vacation. This novel is about an Indigenous couple who travel to various European cities on their quest to find any information about a long-lost relative and a medicine bundle.

King previously won a Governor General award in 2014 for his novel The Back of the Turtle.

The two other finalists in the Fiction category are Lisa Robertson and Francesca Ekwuyasi.

Robertson was nominated for The Bauderlaire Fractal, her debut novel about a woman named Hazel Brown who unexpectedly writes the entire works of acclaimed French poet Charles Baudelaire.

Ekwuyasi received her nomination for her book Butter Honey Pig Bread, which tells the stories of three women from Nigeria.

Three members of the award program’s Peer Assessment Committee will choose the winner in the Fiction category.

“Each individual jury is reading the books and thinking about the books that made sense to them,” Simpson said.

The 2020 Governor General Literary Awards was actually cancelled last year because of the COVID-19 pandemic. Program officials, however, decided to announce 2020 finalists earlier this month. They will reveal the winners in all 14 award categories June 1.

In their efforts to catch up, officials will then announce both their finalists and winners for the 2021 awards this coming fall.

Noopiming: The Cure for White Ladies was also one of 12 finalists in the Novel category for this year’s ReLit Awards, which recognize the best Canadian books published by independent presses.