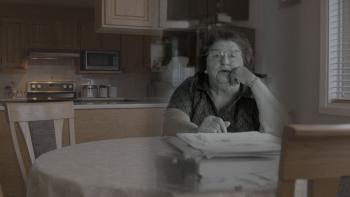 “For more than 145 years, the federal government has used the Indian Act to try to reduce the population of Indians, to rid Canada of the so-called ‘Indian problem’.” — Dr. Pam Palmater, Mi’kmaq lawyer and professor
By Sam Laskaris
Local Journalism Initiative Reporter
Windspeaker.com

A film about the Mohawk woman who fought for decades to challenge sex discrimination in the Indian Act, and whose work eventually led to its amendment under Bill C-31, will be part of the Edmonton International Film Festival.

The film, titled Mary Two-Axe Earley: I Am Indian Again, will have a pair of screenings at the festival, which runs Oct. 1 to Oct. 10.

The 34-minute film was written and directed by Courtney Montour, a Mohawk from Kahnawake, the same First Nation in Quebec that Earley was from.

It will play at the Edmonton festival on Oct. 3 and then again on Oct. 6.

The film will also be available, only to Alberta audiences, however, for those who wish to watch it online. The festival’s online films will be available for purchase from Oct. 4 to Oct. 31.

More information is available at https://edmontonfilmfest.eventive.org/welcome

Mary Two-Axe Earley: I Am Indian Again includes archival footage that has never been seen before and audio recordings of Two-Axe Earley’s activism.

Throughout the film Montour ‘talks’ to Two-Axe Earley, who died in 1996, praising her for her work and accomplishments. Though Montour grew up two streets away from Two-Axe Earley, they never met.

Two-Axe Earley was furious with the Indian Act’s gender discrimination which stated an Indian woman would lose her Indian status by marrying a non-Indian person.

Those who did marry out, lost their right to vote or own property, and also risked banishment from their own communities. They were also not allowed to be buried in local cemeteries with their own relatives.

“Who are they to make that kind of law?” Two-Axe Earley says in the film. “Geez.”

What was also infuriating was the fact that for $50 white people could have their dogs buried in a cemetery.

“Does that make sense?” Two-Axe Earley says. “What? We’re lower than the dog?”

The film includes conversations with Two-Axe Earley’s friend Nellie Carlson, a founding member of Indian Rights for Indian Women, an advocacy group of which Two-Axe Earley was also a member. The group was devoted to resisting gendered colonialism.

“She was so proud of who she was,” Carlson says in the film about Two-Axe Earley.

Carlson, who has a school named after her in Edmonton, died Sept. 10, 2020. The film’s screening in Edmonton will be even more noteworthy as it is being viewed as a one-year memorial to her.

“For more than 145 years, the federal government has used the Indian Act to try to reduce the population of Indians, to rid Canada of the so-called ‘Indian problem’,” she said. “The Indian Act, 1876, defines who is an ‘Indian’ and who can belong to an ‘Indian band’ (now referred to as First Nations). The objective was to assimilate Indians into the general population, so that Canada could acquire the remaining Indian lands and resources, as well as reduce the financial obligations it committed to in the treaties signed with First Nations.

“However, full sex equality has not yet been achieved and many cases are still before the courts,” Palmater said. “The National Inquiry into Missing and Murdered Indigenous Women and Girls found sex discrimination in Indian registration to be a root cause of violence against First Nations women. This is why Mary’s life story and the equality movement she inspired are still relevant today.”

Mary Two-Axe Earley had its world premiere at the Hot Docs Film Festival in Toronto this past May.

It was later screened at the Weengushk International Film Festival in July on Manitoulin Island in Ontario. Montour received a Best Director Award from that festival.

Besides the Edmonton festival, her film will also be shown at the Vancouver International Film Festival, which runs Oct. 1 to Oct. 11.

Then it will travel to the St. John’s International Women’s Film Festival being staged Oct. 14 to Oct. 18 in Newfoundland.

And then later in October it will be screened at the imagineNATIVE Film + Media Arts Festival, which runs Oct. 19 to Oct. 24 in Toronto.