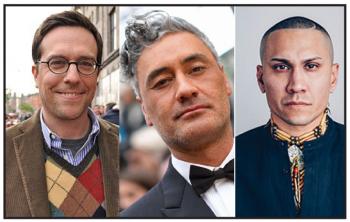 The PSA, in partnership with Harness, the group co-founded by America Ferrera, Wilmer Valderrama and Ryan Piers Williams, is part of IllumiNative’s #WarriorUp campaign, which will also feature a Virtual Town Hall and a weekly podcast to raise awareness of the devastating impact of COVID-19 on Native communities.

“For decades, we have been fighting for the visibility of Native peoples. Now this fight has become absolutely vital to ensuring that Native communities are not left behind or erased from the COVID-19 response,” said Crystal Echo Hawk, executive director of IllumiNative.

“Tribes and Native communities need to be seen, heard and included in local, state, and federal solutions and conversations. Together we can find a common pathway forward out of this public health emergency.”

On Thursday, April 30, Taboo, IllumiNative, NDN Collective and Indian Country Today will co-host a Virtual Town Hall that will livestream on Taboo’s YouTube channel  as well as on Facebook Live on each of their respective Facebook pages to unite Indian Country and allies against COVID-19.

Spotlighting economic and healthcare issues, Native leaders, legislators, influencers, and advocates will explore how the pandemic is exacerbating disparities and inequalities affecting not only Native Americans but all communities of color.