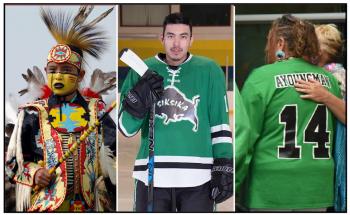 Kristian Ayoungman was a powwow dancer, an elite hockey player, and the best son any mother could hope for, said his mom Melodie. Photos supplied.

“We’re expected to go back and behave, not be angry, not protest, and not take our frustrations out. We have to be silent in life and we have to be silent in death. Or we’re the ones who are villainized.” — former judge Samuel Crowfoot
By Odette Auger
Local Journalism Initiative Reporter
Windspeaker.com

Kakato’si, Kristian Ayoungman, once wrote on his niece’s chalkboard wall “Lead by example.”

This week his mother Melodie Hunt-Ayoungman brought flowers to her son’s newly-placed headstone. She paused to say a prayer for guidance before sharing her thoughts about Kakato’si, Kristian’s traditional name, with Windspeaker.com.

Kristian Ayoungman was a 24-year-old Siksika man. He was culturally connected and living his life on a good path. He was known as an elite hockey player who had declined a draft call to play in Europe so he could stay close to family and culture. He shone in other ways as well, said Melodie.

“He was one of the finest First Nations boys. He was one of those boys that every mother would want. He excelled in everything and anything that he did. He was so humble. He had the kindest heart. When he entered the room he just uplifted everyone.”

On July 26, Brandon Giffen, the man that killed Kristian, was acquitted of murder and found guilty of manslaughter instead.

“Kristian Ayoungman is now the latest in the long line of Indigenous youth who have not, and will never know justice,” said Samuel Crowfoot, a former judge and prosecutor. He is now serving as a councillor for Siksika Nation, his community.

“The words of a killer are worth more than the consequences of his decisions,” said Crowfoot outside the courthouse and shared in a Facebook video.

He expressed disgust and anger over Justice Robert Hall’s verdict, speaking with the experience of having presided over homicide cases himself.

“I heard today how (Hall) took all those decisions, all those conscious actions, and brushed them aside because of the words of the killer who said, ‘I didn’t mean to kill him.’

On March 16, 2019, Kody Giffen, Brandon’s brother, had argued with Kristian at a bar in Strathmore, Alta. Kody went to get his brother to help him in a fight. Brandon decided to bring his hunting rifle with him when they pursued a vehicle carrying Kristian and other Siksika youth.

Kody drove more than double the speed limit to catch up with the vehicle carrying the Siksika youth. Then stopped the truck. Brandon got out, raised the gun, took aim and fired at the fleeing vehicle. The bullet went through the tailgate and killed Ayoungman.

“I cannot conclude beyond a reasonable doubt that the accused subjectively knew it was likely that death would result from him firing the rifle,” Justice Hall decided.

“We heard he is a big game hunter. Anybody who hunts knows 150-200 yards is not a long distance. And that’s if you’re taking down an elk or a moose, and this was a truck,” noted Crowfoot.

“This country, whether it be the Crown or the courts, whether it be the government in this country as a whole, has constantly and consistently undervalued Indigenous lives,” said Crowfoot. “It just underscores the reality for many of our First Nations youth today. We are not just seen in the same light as everybody else. Our lives are not worth the same.”

Although Hall said in the verdict “My finding does not excuse the accused for his actions, and it does not absolve him,” the judge decided to deliver a verdict on the lesser charge.

Kristian’s mother received the judge’s verdict with the grace that comes from her Siksika teachings.

“We’re disappointed with the verdict from the judge,” she said, speaking to supporters outside the courtroom, “but that’s on him. It’s on the court system. It’s not on me. It’s not on any of you. It’s not on my children, and it’s definitely not on my son.”

The night before the verdict, Kristian’s young sister Kyle Rose decided to Jingle dance at the courthouse. It’s the healing dance.

Melodie told Windspeaker.com she will always be Kristian’s mom, and she’s focused on her family continuing to live life in a good way with a strong connection to culture.

“I chose this lifestyle to be an example for my kids and to show them that they can make a difference in life in the choices that they make; in hopes that they'll learn that their choices matter and what they do matters,” said Melodie.

“Our family is not OK with the verdict. It’s not over yet.”

Between hearing the verdict and placing the headstone, the family went to the Strathmore Stampede.

Kristian’s dad Steve Hunt danced the Buffalo dance in honour of their boy.

“The last time they danced together was at the Strathmore rodeo and they did the Buffalo dance,” said Melodie. “(Steve) didn't have it announced. He just danced, hard.”

When the dance was finished, the announcers explained the significance to the crowd, who gave a standing ovation.

In an interview with Windspeaker.com, Crowfoot said he had braced for the worst in the courtroom. When he heard Hall recount the victim’s alcohol consumption on the night of the shooting, Crowfoot noted it was mentioned almost as if it were a mitigating factor, as though what the victim had to drink somehow lessened the responsibility of the shooter for his own actions.

“You shoot at somebody, you shoot at him, right? It doesn't matter if they're intoxicated or not,” said Crowfoot. “A dangerous action is directed at another human.”

Whenever something involves Indigenous people, alcohol is almost always referenced, or an attempt is made to draw a line to alcohol, said Crowfoot.

“The fact that he mentioned that to me signaled victim blaming.”

Crowfoot spoke about the devaluation of Indigenous lives and cited many examples, from the history of the Indian Act to the systemic racism that still exists in many areas of government services.

He says it’s been seen clearly in the response this summer to children’s bodies being recovered at residential school sites.

“Look at the outrage over burned churches, as opposed to the failure to prosecute those who committed the crimes of the residential school system. Thousands and thousands of graves are being dug up, but there’s no accountability for those who put them there.”

Crowfoot said it’s easy to offer a national holiday and lower flags to half mast, as opposed to launching a national campaign to prosecute the perpetrators of these acts of violence and genocide.

Crowfoot said many are still alive and walking among us. The last residential school closed as recently as 1996, meaning those involved could be in their fifties, or sixties, and not a part of ancient history as some would lead people to believe.

“The fact that there's very little to no pressure being done in that area tells me it's all pomp and circumstance. This Canadian government does not care about Indigenous lives.”

Outside the courthouse on July 26, Crowfoot called upon people to take action.

“Canada’s supposed to be for all of us, but even those who are native to this land cannot say that.”