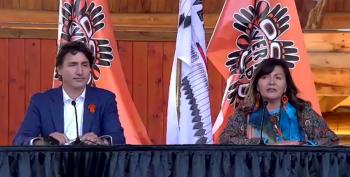 “I’m here because our babies are buried here… our children, our little ones, they deserve justice. They deserve ceremony and above all else they deserve the dignity to be named and either ceremonially or physically returned to their homelands.” — Assembly of First Nations National Chief RoseAnne Archibald
By Shari Narine
Local Journalism Initiative Reporter
Windspeaker.com

Tk’emlúps te Secwe̓pemc Kukpi7 Rosanne Casimir did not soften her words as she called out Prime Minister Justin Trudeau—not once but twice—for his notable absence when her community marked the first National Day of Truth and Reconciliation on Sept. 30.

She reprimanded Trudeau as he sat right next to her both during a media event on Oct. 18 and the community event that followed about an hour later.

She also pointed out that it had taken almost five months after Tk’emlúps te Secwe̓pemc in B.C. had uncovered the 215 unmarked graves of children on a small section of the Kamloops Indian Residential School grounds for Trudeau to come to the community.

She called Trudeau’s presence Oct. 18 “bittersweet….. It was a long-awaited moment to receive a personal hand of recognition and sympathy regarding this horrific confirmation of unmarked graves from the Canadian head of state.”

Casimer said her community had sent two invitations to Trudeau to attend Sept. 30, if not for an in-person visit, at least to provide a virtual greeting. He responded to neither.

Casimer said a journalist “quietly” informed them at the Sept. 30 commemoration that Trudeau was instead in Tofino, B.C. with his family.

“The shock, anger, and sorrow and disbelief was palpable in our community and it rippled throughout the world, to say the least. Today is about making some positive steps forward and rectifying a mistake,” said Casimer.

Trudeau met with Casimer, other leaders and the community earlier in the day to apologize. He was contrite in making the televised apology and thanked Casimer for giving him and the Liberal government another opportunity. He also said he regretted that his actions overshadowed the celebration held on Parliament Hill on the eve of the first National Truth and Reconciliation Day.

“I deeply regret not having been here to commemorate and to move forward with the Tk’emlúps te Secwe̓pemc. It is something that we need to commit ourselves to do better on every single day as a government and me as an individual,” said Trudeau. “We will walk this path together and that is why I am here.”

Casimer was gracious in accepting Trudeau’s apology. However, she joined forces with Assembly of First Nations (AFN) British Columbia Regional Chief Terry Teegee and Shuswap National Tribal Council Chair Kukpi7 Wayne Christian in saying that Trudeau needed to deliver on his words and support the community’s needs: funding for a healing centre, for an Elders lodge, and for a museum, and the necessary resources to continue the work that had been started on the residential school grounds and identifying the lost children through school records.

Trudeau said as far as he knew all Indian residential school documents in the federal government’s possession had been turned over to the National Centre for Truth and Reconciliation in Winnipeg. He said those records included all but the first two years of operations for the Kamloops residential school.

Legal counsel for Tk’emlúps te Secwépemc confirmed some documents had been shared but would not provide any further details.

Trudeau said his government would “continue to work together” with communities on their healing journeys but was shy on specifics and definite commitments.

Archibald, who sat on the other side of Trudeau, said this was her third visit to the community.

“I’m here because our babies are buried here… our children, our little ones, they deserve justice. They deserve ceremony and above all else they deserve the dignity to be named and either ceremonially or physically returned to their homelands. And these little ones here in Secwe̓pemc territory are not the only ones,” said Archibald.

She also called for accountability for the deaths of the thousands of children, who will be found at the “former institutions of assimilation and genocide,” as Archibald calls Indian residential schools.

Archibald reiterated the call by chiefs through an emergency resolution in July for the United Nations to appoint a special rapporteur to investigate Canada and the Roman Catholic church. A second emergency resolution by chiefs-in-assembly called for the involvement of the International Criminal Court.

“For us, it’s about accountability and it’s also about justice … so it is a long path ahead,” said Casimer.

Archibald presented Trudeau with a two-page Healing Path Forward Accord, which sets out a framework for “strategic direction and action toward evolutionary and positive change in this country for First Nations people.”

The accord has three components: equality and equity, meaning basic rights such as suitable housing and clean drinking water; establishing a proper political process with the federal government; and implementing, recognizing, and respecting inherent and treaty rights.