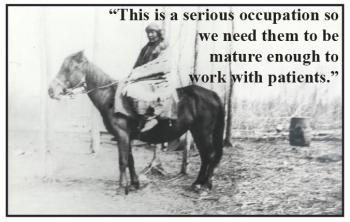 Pictured is iskwecic - (c. 1920 - 30), the first chief's daughter of Sturgeon Lake First Nation, who was a medicine woman, an extractor, who traveled to do healing work.

“This is really working with peoples’ spirits, bodies. If they’re working with trauma the youth will be taught how to do a traditional soul retrieval, which is bringing those parts of the person back so they feel whole again.” — Dr. Leta Kingfisher
By Shari Narine
Windspeaker.com Contributor

A new youth suicide prevention program is considering that some youth who are struggling with isolation and substance abuse are actually spiritually gifted and can be trained as traditional healers.

“What we’re looking at is people who have extraordinary abilities to connect with spirituality and spirits and to use that to heal people,” said Dr. Leta Kingfisher, a member of the Sturgeon Lake First Nation, where this new approach is being undertaken.

Funding for the three-year training program was received from Health Canada through its mental health for youth program.

“The language that was used (for the Health Canada program) didn’t quite fit for how we wanted to address the youth. Instead of that deficit-based terminology we started to look at it in more of an Indigenous way… If we have youth that are troubled, we have solutions traditionally, which is to start considering they may be gifted, spiritually gifted,” said Kingfisher.

This approach to youth suicide prevention will be the first of its kind in Canada.

The last two years have been spent re-introducing the community and the youth to traditional healing practises, something that has been lost for the past 80 or so years. That time was also spent in identifying potential youth for training.

“There are youth who are displaying gifts already and then there are youth that are showing other signs that we look for, certain things that would traditionally be looked at as … different behaviours, different levels of coping skills … as they were starting to hear spirits or they were starting to see things. In modern times, they don’t have anybody to talk to,” said Kingfisher.

She points out that not all youth who have difficulties are spiritually gifted and those “displaying obvious crisis” need to be assisted in other ways.

Now 15 youth and “community members with high sensitivity” have enrolled in the training program, which will get underway soon.

A three-year curriculum has been developed with once-a-month training to be undertaken through the Lloyd Johnson Memorial Healing Lodge. It will include cultural teachings and songs, as well as the ethics and skill developments as a traditional healer.

Kingfisher and Elder Willie Ermine, who is involved with both the healing lodge and the health centre, will be doing the training while Elders and Knowledge Keepers will assist with cultural teachings.

The youth need to be 14 or 15 years of age, says Kingfisher, as they must fast for two days.

“This is a serious occupation so we need them to be mature enough to work with patients, to work with people who are sick,” she said.

“As they’re doing this training they also have to mature and work with the spirits in their own way… This kind of training is traditionally quite long.”

About half of those enrolled for training are youth.

Once trained, the youth will work with other youth, as well as adults in the community.

“We’re not looking at it from a western perspective where it’s talk therapy. This is really working with peoples’ spirits, bodies. If they’re working with trauma the youth will be taught how to do a traditional soul retrieval, which is bringing those parts of the person back so they feel whole again,” said Kingfisher.

Kingfisher, who is professor of Indigenous Studies at the First Nations University of Canada, also has a traditional healing practise and a trauma therapy practise. Her interest in the afterlife came at an early age when she lost her mother.

Kingfisher participated in cultural ceremonies, got her formal university education, and then was trained on the land by two First Nations women. She will be leading the youth in working on the land, working with plants, and working with peoples’ dreams.

The traditional healing program is only one part of a larger goal which is working toward creating an Indigenous Knowledge Centre on the northern Saskatchewan First Nation. Already Sturgeon Lake First Nation has developed traditional health clinics, a traditional pharmacy, cultural camps for the youth, language teachings and language camps, a grandmother circle, midwifery and birthing practises, and is undertaking community-based research.

The visioning work for the centre has begun thanks to a grant from the University of Saskatchewan.

Kingfisher says that Sturgeon Lake First Nation is a little farther ahead than other First Nations when it comes to developing programs with a traditional approach to health because in 1995 it took over its health transfer agreement allowing the funding to flow directly to the community so it could develop its own community health model. The healing lodge operates alongside the health centre to deliver integrated holistic health programming.

Kingfisher is excited about this traditional healing training.

“As we start training youth then we’ll have another cohort start, as they start to inform each other. Long term is we will have a community with a lot of healers,” she said.