‘They just keep shooting’: Little has changed since the police killing of Dudley George, says chief 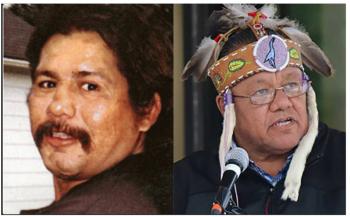 A few hours after Anthony “Dudley” George was shot by Ontario Provincial Police at Ipperwash Park on the evening of Sept. 6, 1995, Glen Hare, then chief of M’Chigeeng First Nation, arrived at the park with an Elder in Hare’s white Crown Victoria.

“It never dawned on me when I drove into the park and I almost got shot (by occupiers) because I looked like a police cruiser. We jumped out and I started talking my language and so that took care of that,” said Hare, who is now Anishinabek Nation grand council chief.

It also never occurred to him that 25 years later, violent actions by police against Indigenous people would remain an ongoing concern.

Members of the Kettle and Stony Point First Nation were joined by other Indigenous supporters in their occupation of Ipperwash Provincial Park in 1995, which began on Sept. 4. They were in the park as part of a land claim occupation. Canada had expropriated the land from the Stoney Point band during the Second World War under the War Measures Act, and never returned it, as promised, after the war ended.

On the evening of Sept. 6, the OPP took an offensive stance and clashed violently with the occupiers. It was then that Dudley George was shot by an OPP officer and Cecil Bernard George was brutally assaulted and arrested by OPP members. Dudley George was driven to hospital by family members and pronounced dead upon arrival.

In 2003, the Ontario government established the Ipperwash Inquiry tasked with reporting on the events surrounding Dudley George’s death, and to make recommendations on how to avoid violence in similar circumstances in future.

Ipperwash Inquiry Commissioner Justice Sidney B. Linden also noted the “disturbing … manner in which the OPP dealt” with the production and distribution of “offensive” coffee mugs and T-shirts celebrating the OPP’s actions at Ipperwash. Senior police officials claimed the behaviour did not involve “misconduct”. But when misconduct was determined in other occasions, the officers were dealt with informally.

Among Linden’s recommendations specific to the OPP were the continuation of Native awareness training; the development of best practises in police/Aboriginal relations; and racism complaints against the OPP be handled by an independent police review director.

Despite those and many other recommendations, Hare says little has changed from the Ipperwash events of 25 years ago.

“We continue to call on the law enforcement to work with us to address these issues. One of the things that’s very clear right now today, what does ‘a reasonable force’ mean? Right now it means deadly force to us,” said Hare.

He does not stand alone in his beliefs.

Ontario Regional Chief RoseAnne Archibald has added her voice to the call for an investigation into systemic racism, recent deaths and brutal treatment of First Nations people by policing services across Canada.

“We, as First Nations people, have experienced too many traumatic events at the hands of police services, and it’s clear that one of the greatest tragedies in our society is the deep-rooted prejudice and systemic racism embedded in the institutions which are supposed to serve us. Police have killed more Indigenous people during the pandemic than COVID-19,” she said.

“COVID is not racist. I really feel that the bullets (the police) use are racist. That is so sad to say, but it is a fact. Stop shooting,” said Hare.

On March 10, Athabasca Chipewyan First Nation Chief Allan Adam was put in a chokehold and punched in the head by an RCMP officer in Fort McMurray, Alta., after being apprehended for an expired licence plate.

On June 1 in Kinnigait, Nunavut, an RCMP officer used the door of his moving vehicle to knock down a running man, who was later assaulted in a cell by another detainee, it is alleged. He was airlifted to Iqaluit for treatment.

Both Adam’s and the Kinnigait incidents were captured on cell phones by bystanders. In fact, right across the country, bystanders’ cell phone video footage has revealed city, provincial and national police forces undertaking violence against not only Indigenous people, but Black people and people of colour.

Hare says he is well aware that it is not only Indigenous people who are treated poorly by police.

Both Hare and Archibald call for the defunding of police. However, on Aug. 20, the Ontario government announced the hiring of 200 more officers.

The Ipperwash Inquiry is only one report that has put forward recommendations when it comes to changes in policing. Other recommendations have come through the Royal Commission on Aboriginal Peoples (1996) the Truth and Reconciliation Commission (2015), and the Murdered and Missing Indigenous Women and Girls national inquiry (2019).

“Why do we, on anything, have our inquiries when the recommendations are put forward and they don’t act on them?” said Hare.

That is a change Archibald is calling for, saying the Ipperwash Inquiry can provide a roadmap.