Teachers, students visit former residential school to learn what neither have been taught before 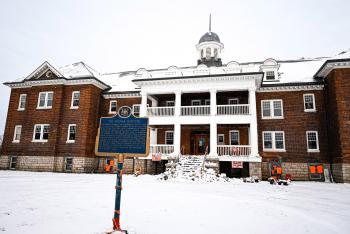 The former Ontario residential school known as “the mush hole” is now being toured by hundreds of virtual visitors, including many teachers seeking to learn the true story of such places to pass on to their students. Photo courtesy of the Woodland Cultural Centre.

“For us it’s an opportunity. Every new person who comes for a tour, comes to the website, creates a chance to create a relationship.” — Layla Black
By Colin Graf
Local Journalism Initiative Reporter
Windspeaker.com

The interest of teachers is turning out to be one of the driving forces behind the soaring popularity of online tours of one of Ontario’s most notorious residential schools.

Educators looking to further their understanding of Canada’s history and treatment of Indigenous people and pass it on to their students are a frequent presence on the virtual visits to the former Mohawk Institute, located near the Six Nations of the Grand River in the city of Brantford, between London and Hamilton.

The tours, conducted by staff at the Woodland Cultural Centre, which is partly housed in the former school building, are regularly attracting 100 or more participants twice every month, says the Centre’s Layla Black.

With Canadian teachers often on the list, it’s really great to see people taking an active role in their own education and awareness,” Black tells Windspeaker.com. Visitors are also joining the tours from as far away as Germany, Italy and the UK, leading to the events becoming “a powerful way to reach people on a global platform,” she said.

Visitors on the tours learn about a long list of abusive and dehumanizing practices undertaken at the school, including being forced to speak English, with punishments for students speaking their own languages ranging to the point of having a needle pushed through their tongues, said guide Lorrie Gallant, who describes the story of each room of the building as she walks through them.

Many students grew up thinking their parents were cruel for sending them to such a place, she explains. They didn’t know their parents faced jail if they didn’t give the children up to authorities.

Some of the parents who came from far distances to visit their children might not have spoken much English, so some visits, with a school supervisor sitting outside the door, would be spent in silence, Gallant says. The kids knew the supervisor would make sure they were punished later if they were overheard speaking their birth tongue.

The building got its nickname, “the mush hole”, thanks to the porridge that was served to students. If they didn’t eat it at breakfast, the same bowl of mush would be returned to children at lunch, and again at dinner if they didn’t eat it on the second pass. One school survivor has recounted that when the porridge had worms in it “you learned to push them aside and go ahead and eat it,” according to the guide.

They had 20 minutes to eat a meal, often featuring the infamous porridge, dry toast and powdered milk, even though the children had to collect the eggs and the cows’ milk from the farm buildings on the site that they were never allowed to taste. The only meat they had were organ meats, such as liver and heart; “the parts no one else wanted.” Gallant relates.

She tells the story of one older girl who climbed out a window and down the wall to visit the Institute’s apple orchard. She filled the skirts of her nightgown with apples before realizing she couldn’t climb the wall like that. She managed to find a way back in and gave her apples to the youngest students. They were caught and punished the next day because the young children couldn't figure out how to hide the cores.

Nighttime didn’t always bring relief to the children either. Sent to bed around 6 p.m. with the daylight still streaming through the windows, they would have trouble sleeping enough before being roused not long after dawn for chores. If a young child soiled their sheets at night, the consequences were harsh; girls were stripped and put in a scalding hot bath, boys would be paraded with their sheets wrapped around them for public humiliation. Other than those occasions, bathing was a once-a-week affair.

Many teachers are joining events such as the Mohawk Institute tours because they feel “paralyzed” by their own lack of knowledge about Indigenous history in Canada, and need to further their own learning before they can teach their students about it, said educator Scott Garant of Toronto. He says classes at his school for the deaf, E.C. Drury School in the city of Milton, are showing great interest in learning about Indigenous history. There are similar stories of abuses of deaf children in residential schools they attended.

Taking the tours can be transformative for some people, says Black. “You will see things differently. You can’t unsee what you have seen,” she tells participants during a group discussion following the recent tour.

Black says she is often asked what outsiders to Indigenous communities can do to help overcome the tragic legacy of residential schools. Her answer? Invite more and more Canadians of settler ancestry to learn about this history.

“One of the best things (allies can do) is sharing your own perspective, how you see things differently now. Your friends and family are more likely to listen to you in your own voice than to anyone else,” she tells them.

The popularity of the tours has soared since the first revelations from the Tk’emlúps te Secwépemc First Nation in British Columbia of unmarked burials at the former residential school in Kamloops last spring, she says. There was “a great surge” in social media traffic, and more people started joining the online tours that began at the start of the COVID-19 pandemic.

The tours allow for personal connections that help foster reconciliation, Black explains. “For us it’s an opportunity. Every new person who comes for a tour, comes to the website, creates a chance to create a relationship.”

In addition to the public tours, The Woodland Centre is also doing private tours for school classes, church groups, and other community organizations. Demand for the school tours has been so high that all spots are booked up until spring, according to Black. While some disturbing content is not included in the school tours, they are still recommended only for students over 13.

With the growing interest in school tours, and after more than 2,000 students attended Woodland’s programming last Sept. 30 for Orange Shirt Day, the centre’s education team has now created a series of nine workshops about Haudenosaunee culture and history for ages Kindergarten to the university level, she says.

The tours have also been an effective fundraising tool for needed renovations to the former residential school building. All of the proceeds from ticket sales for the tours goes to the Save the Evidence campaign, which hopes to restore parts of the building damaged by a leaky roof, and re-build other areas as well. The school was closed in 1970 and re-opened two years later as the Woodland Centre.