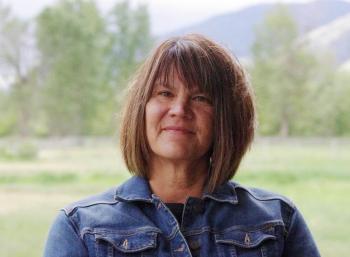 Kelly Terbasket is founder of kinSHIFT, a new organization that provides truth and reconciliation workshops for non-Indigenous allies. Photo by Lauren Hamilton.

“The most important element of enowkinwixʷ is that every voice matters, and that if we're not listening to what the smallest voice has to say, then we're not doing what we're supposed to be doing.” — Denise Lecoy, kinSHIFT facilitator
By Odette Auger
Local Journalism Initiative Reporter
Windspeaker.com

A Syilx woman has founded a new organization dedicated to helping settlers engage with Indigenous peoples in a respectful way.

Kelly Terbasket, born and raised in Okanagan-Syilx Nation, launched her new organization called  kinSHIFT on May 6.

Terbasket says kinSHIFT was formed after two decades of working with Indigenous organizations. She says she saw a distinct need arise for workshops tailored to support non-Indigenous allies.

“KinSHIFT emerged because of my identity, my mixed heritage and my life purpose,” she said.

“I've always felt the divide between cultures and wanting to be part of bridging, especially bridging awareness and understanding the differences of realities.”

Terbasket calls herself a champion of change, and sees facilitators as change agents. In her work, this is all about moving “towards systemic change,” she said.

For the past seven years, Terbasket has been working as a program director for IndigenEYEZ, an organization dedicated to building leadership through connecting Indigenous peoples to themselves, communities, and land.

Over the past four years, Terbasket says IndigenEYEZ has been receiving requests from non-Indigenous organizations for truth and reconciliation workshops, which was how the idea for kinSHIFT formed as an offshoot organization.

“This need is opening up,” she said. “People are actually asking for TRC workshops, race equity workshops, cultural safety.”

Terbasket said working with allies is important because it creates a safe space for them to “quit censoring themselves,” allowing people to make mistakes without harming Indigenous peoples in the process.

Through running mixed workshops with both Indigenous and non-Indigenous people, Terbasket said she noticed that Indigenous people would too often carry the burden of emotional labour to aid the learning curve of allies.

Terbasket says she wants to help non-Indigenous people understand power and privilege, implicit bias, and shared responsibilities around micro-aggressions and othering. She speaks of having compassion for the fact that allies need space to do this work.

“What we want to do is elicit their implicit bias. We don't want it to stay hidden behind political correctness because then they can't see it,” she said.

“How do you know how to transform it if you don't even know it's there? So, we do these activities to help bring it out, in a safer space, into the light, to look at it.”

In her work, Terbasket seeks to explain colonial conditioning and decolonization practices. She offers stories from her own life and learning journey and hands-on activities.

“The roots come from Syilx teachers, from Indigenous pedagogy, and Indigenous principles,” she said.

There are four kinSHIFT workshops on different topics that will be offered on an ongoing basis.

The first workshop will be hosted on June 1. It will focus on colonialism. Terbasket explains it’s not a history lesson. She’ll be connecting the dots from the shared history to today.

Terbasket said the core of the work is trauma-informed, meaning bringing in an understanding of the cycles of trauma.

“Most of us can look at the TV news and know, ‘oh, I'd never do that’… but we're all swimming in this water of systemic patterns that we've been brought up in,” she said.

“Unless you really are conscious of it, you highly likely are contributing to the systemic racist patterns and doing micro-aggressive things with Indigenous people without even knowing it.”

The fourth in the series of workshops will focus on unravelling those subtle micro-aggressions and othering.

Denise Lecoy is one of the key facilitators for the kinSHIFT facilitation team. She is the daughter of Snpinktn Hereditary Chief Adam Eneas and is of Okanagan-Syilx and Sḵwxwú7mesh heritage.

She says the voices and resources behind kinSHIFT are Indigenous women who have a lived experience with the impacts and inequities related to colonization.

“They have committed their whole lives trying to address those inequities and give voice to those who aren’t able to,” she said.

The third workshop is about power and privilege, and that is where Lecoy brings in enowkinwixʷ, Sylix teachings of the four food chiefs.

“The enowkinwixʷ process requires that all perspectives be heard when we bring people together to address a problem,” she said.

“In this process, we respect — and expect — that there's diversity. But it really depends on that diversity to come up with solutions that work for everybody.”

“It requires each and every person who wants to participate in this truth and reconciliation process to start from that place,” she said.

“The most important element of enowkinwixʷ is that every voice matters, and that if we're not listening to what the smallest voice has to say, then we're not doing what we're supposed to be doing.”

Finally, Lecoy said, Indigenous peoples must take the leap to get comfortable with correcting non-Indigenous allies.

“You know, my people have always been self-determining people. We've had systems that worked for us for over 10,000 years, and that really needs to be understood and respected,” said Lecoy.

“It is a really good way to address the inequities that we see for all peoples. If we're not taking care of everyone, we're not doing a very good job.”