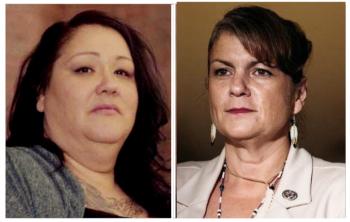 “When a woman has been trafficked, when a girl has gone through the sex trade, it's like coming out of war. You have the same post-traumatic stress disorder as someone who's been to Afghanistan or Vietnam.” — Bridget Perrier
By Julie Chadwick
Local Journalism Initiative Reporter
Windspeaker.com

Advocates and survivors say they welcome Ontario's recent announcement of new provincial funds aimed at combatting human trafficking and child exploitation, but caution that the problem is still vastly underestimated.

In June, the province of Ontario announced $46 million in funds over the next five years towards community-based and Indigenous-specific programs to help survivors of sex trafficking.

The money is part of a larger $307 million Anti-Human Trafficking Strategy announced in March and launched in response to the urgency of the issue: two-thirds of cases in Canada are in Ontario and the average age of recruitment into sex trafficking is just 13 years old.

Indigenous women and girls are particularly vulnerable, and the issue has only begun to become visible within the last five years, says Dawn Lavell-Harvard, president of the Ontario Native Women's Association and director of the First People's House of Learning at Trent University.

“It's been one of those hidden secrets, honestly, since the beginning of colonization. Let's be real. Right from the earliest explorers who were coming in and kidnapping Indigenous women and giving them to their sailors and their crews as rewards for being at sea for so long, like we're just so much souvenirs you can buy at a gift shop,” said Lavell-Harvard.

“So when people ask, 'Is this a new thing?' Absolutely not. It's a new concept that we understand it as trafficking. But unfortunately the dehumanization and exploitation of Indigenous women and girls has been going on for centuries and we're only just starting to shine a light on it and call it what it is.”

Part of tackling the problem is that many Canadians think human trafficking is something that is imported from overseas, or happens somewhere else to other people. That is simply not the case, Lavell-Harvard said.

“We don't see that the overwhelming majority of victims of [sex] trafficking are domestic victims. They're Canadian citizens,” she says. “Unfortunately, for sex trafficking in Canada, they're disproportionately Indigenous women and girls.”

For Bridget Perrier, who was lured and trafficked at the age of 12, the fight to pull herself out of the brutality of forced prostitution has given her unique insights.

In 2007 she cofounded Sex Trade 101 with Natasha Falle, another survivor, to provide support and resources to sex trafficked individuals. Despite being a small organization, Perrier estimates they have helped more than 1,000 women and children escape prostitution.

If the province wants a better success rate in the struggle to end human trafficking, resources should foremost be allocated to survivor-led organizations that understand firsthand the complexity of the issues that victims face, Perrier says. There should be an experiential person on the board, survivors in leadership positions directing the services, and be clear-cut about helping victims exit the trade.

“When a woman has been trafficked, when a girl has gone through the sex trade, it's like coming out of war. You have the same post-traumatic stress disorder as someone who's been to Afghanistan or Vietnam,” says Perrier. “When I left, I remember I slept for a week straight.”

She likens it more to a rescue and recovery operation, and says it proceeds through three phases: immediate, transitional, and long-term, all of which have particular characteristics and requirements.

“Rescue, restore, and reunite back into society. We need that and we don't have that,” she says.

Another necessity is for Indigenous people to be at the forefront of recovery efforts.

“It's not for us. It's a part of colonialism. It's that legacy of colonialism, that doctrine [...] that makes it okay for us to be bought and sold.”

“Reflecting the valuable input we heard from survivors of human trafficking, front line service providers, Indigenous communities and organizations and law enforcement, funding under both the Indigenous-led Initiatives Fund and Community Supports Fund prioritizes trauma-informed programming developed and delivered by survivor-led organizations to ensure a more robust service system,” said Manuel Alas-Sevillano, a spokesperson for the Ministry of Children, Community and Social Services, in an email statement.

Applications for funding are open until July 30. For more information visit https://www.ontario.ca/page/ontarios-anti-human-trafficking-strategy-2020-2025