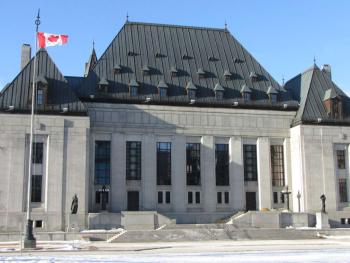 In a split 5-4 decision, the Supreme Court of Canada has ruled that the unavailability of conditional sentences for offences carrying a maximum sentence of at least 14 years or those with a maximum sentence of 10 years for drug offences is constitutional and does not infringe upon the rights of Indigenous offenders.

Cheyenne Sharma, an Ojibwa woman and a member of the Saugeen First Nation, pleaded guilty in 2016 for transporting two kilograms of cocaine into Canada in exchange for $20,000 from her boyfriend. She sought a conditional sentence but was not eligible because of the maximum 10-year sentence on the offence of the import, export, trafficking or production of drugs. She challenged her 18-month incarceration claiming it infringed on her sections 7 and 15 Charter rights and discriminated against Indigenous offenders.

Under sect. 7 of the Charter of Rights and Freedoms, Canadians are guaranteed the right to life, liberty and security, except in accordance with the principles of fundamental justice, while sect. 15, guarantees equality under the law, without discrimination based on race, national or ethnic origin, colour, religion, sex, age or mental or physical disability.

“While the crisis of Indigenous incarceration is undeniable, Ms. Sharma did not demonstrate that the impugned provisions created or contributed to a disproportionate impact on Indigenous offenders, relative to non‑Indigenous offenders…” wrote Justices Russell Brown and Malcolm Rowe, who delivered the majority opinion on behalf of Justices Richard Wagner, Michael Moldaver and Suzanne Côté.

The justices noted that Sharma “adduced no statistical information showing that the law creates such a distinction.”

In 2012, the Criminal Code was amended through the Safe Streets and Communities Act to add mandatory minimum incarceration terms for certain offences, including the offence to which Sharma pleaded guilty. Mandatory minimums do not allow for conditional sentences.

Sharma’s case worked its way to the Supreme Court from the Ontario Court of Appeal, where the majority ruled that the Safe Streets and Communities Act discriminated against Indigenous offenders and was overbroad. The Crown appealed.

Sharma’s legal counsel, along with numerous interveners representing Indigenous and women’s organizations, argued at the Supreme Court in March that the inability of trial judges to fully consider Gladue reports on all charges and therefore their inability to use all forms of sentencing, which had to include conditional sentencing, was a restriction that impacted on the constitutional rights of Indigenous people.

Gladue reports were introduced in the Criminal Code in 1996 in response to the over-representation of Indigenous people in the justice system. When imposing sentences, judges are required to take into consideration the personal impact colonialism has had on Indigenous offenders as outlined in individual Gladue reports.

In their majority decision, the justices held that “it is undisputed that the sentencing judge must take account of the particular circumstances of Indigenous offenders…”

They also pointed out that Sharma was sentenced to 18 months incarceration which was “well below the established range for similar offences” because the Gladue framework was taken into account.

A comprehensive Gladue report for Sharma indicated a young life impacted by hardships, including the colonial impact of residential schools. Sharma was raised by her mother and grandmother, who was a residential school survivor.

Legal counsel for Canada, BC and Saskatchewan argued in March that the Charter of Rights and Freedoms had not been infringed upon and as such this was not a constitutional issue.

The majority decision from the Supreme Court also held that Gladue reports, although important, were “a legislative provision, not a constitutional imperative, and it is open to Parliament to amend it…(and) a transfer of sentencing policy-making from Parliament to judges… would be contrary to the separation of powers, at odds with decades of our jurisprudence stressing Parliament’s latitude over sentencing within constitutional limits, and must be rejected.”

The dissenting opinion was delivered by Justice Andromache Karakatsanis on behalf of Justices Sheilah Martin, Nicholas Kasirer and Mahmud Jamal.

Karakatsanis held that sections 7 and 15 of the Charter were infringed upon as judges were unable to consider alternatives to imprisonment depriving “some individuals of their liberty in a manner that is overbroad: by using maximum sentences as a proxy for the seriousness of an offence, capturing the most and the least serious criminal conduct, they overstep their aim of punishing more serious offences with incarceration.”

She also noted that “maximum sentences are a flawed proxy for the gravity of offences which can be committed in circumstances ranging in severity, from the relatively more serious to the relatively less serious.”

The Supreme Court’s ruling will have no further impact on Sharma as her sentence has already been served.