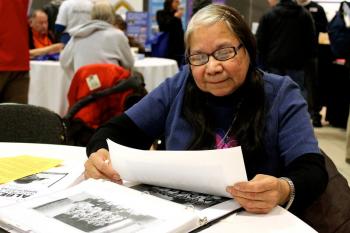 “I might be a small voice crying in the wilderness but, you know, I will be heard when it comes to missing and murdered Indigenous women and girls and others because it’s impacted my life too. Yes, and my heart is in what Caring Hearts does.” —Lorna Standingready of Caring Hearts Counselling
By Shari Narine
Local Journalism Initiative Reporter
Windspeaker.com

Regina’s Caring Hearts Counselling is the recipient of $332,270 from Justice Canada’s Victims Fund. It marks the mid-way point of a three-year financial commitment from the government.

Dwayne Yasinowski, education director for Caring Hearts Counselling, said the funds will allow the organization to build a toolkit, which they hope to launch in October. That toolkit will have a “two-eyed seeing approach” and will demonstrate how traditional healing practises and western therapeutic approaches can work together to support families of missing and murdered Indigenous women and girls.

The toolkit will also ensure that the families are receiving the supports and services they need in a culturally-appropriate manner to help them feel comfortable and safe when seeking supports and that they feel respected in their beliefs, said Yasinowski.

He said the loss suffered by families of missing people is unique and impacts not only the individual and family but also the community.

The funding announced Jan. 13 to support families of #MMIWG and gender-diverse peoples, however, was not the major announcement expected when the Justice Department sent notice of the virtual press gathering. Many thought the event would deal with funding for the MMIWG national action plan.

“The implementation of the action plan … (is) complex and is taking time, but we are pushing that forward. We’re doing what we can,” said David Lametti, minister of Justice and Attorney General of Canada.

The National Inquiry into Missing and Murdered Indigenous Women and Girls and 2SLGBTQQIA+ released its final report in 2019. On the second anniversary of that report, the federal government announced its approach to creating a national action plan, which included a 12-month wait for developing an implementation plan.

While the $332,270 from Justice Canada’s Victims Fund to Regina’s Caring Hearts Counselling may seem like a drop in the bucket compared to the overarching work that is needed to address the complex issue, Lametti says the support should not be dismissed.

“There are a number of ministers who have a role working in partnership with Indigenous leadership across Canada as well as groups, like Caring Hearts …. This is one particular way in which the minister of Justice can support the implementation of the MMIWG report,” said Lametti.

The Victims Fund puts victims at the forefront of the justice system, he said, giving them a voice and access to the resources they need.

He said the Victims Fund had supported 30 Indigenous-led projects to provide community-based service, which is one way the government was working towards “broader efforts to transform the criminal justice system and better support the needs of victims and survivors.”

While the official announcement for Caring Hearts’ funding was made yesterday, the money was approved on Sept. 24, 2020.

“Meegwitch for this way of giving money … so that we can go on…. It costs to travel when there is a voice calling for help… I’ve got to do what I can in the way I was taught so long ago,” she said.

Standingready said family members have questions and they have hope that those questions will be answered.

“I might be a small voice crying in the wilderness but, you know, I will be heard when it comes to missing and murdered Indigenous women and girls and others because it’s impacted my life too. Yes, and my heart is in what Caring Hearts does,” said Standingready.

Yasinowski said the funding will allow Caring Hearts Counselling to continue to build momentum as it creates relationships and raises awareness throughout Saskatchewan about the importance of providing culturally appropriate supports for families of MMIWG.