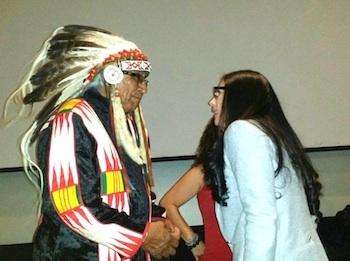 Chief Arvol Looking Horse with Lisa Edgar who presented him with a $10,000 cheque on behalf of Scugog Island First Nation. (Photo: Barb Nahwegahbow)

“They said, ‘enough is enough’.” They came to stand up for the water of life, to protect the water and they are doing it with prayer. The Elders have told them 'no guns, no violence, you stand there in peace and prayer' and, so far, we are standing like that today. Mni Winconi. Water is life.” ~ Chief Arvol Looking Horse

Chief Arvol Looking Horse, 19th generation keeper of the Sacred White Buffalo Calf Pipe and the spiritual leader of Standing Rock, brought a message of unity through the power of prayer to Toronto on Nov. 28.

“I am Lakota. I come from Standing Rock,” Chief Looking Horse said. “We have over 300 flags. We have more flags than the United Nations,” he said of the nations represented who stand with the water protectors in North Dakota against the Dakota Access Pipeline. More than 15,000 people are in the camp and it continues to grow, he said.

“Today, it’s the people that are uniting. We have recognized all ages, all nations. We must unite through these times,” he said.

Chief Looking Horse was speaking at a fundraising event for Standing Rock at the Ontario Institute for Studies in Education (OISE). The event was organized by Suzanne Smoke and a team of volunteers.

With less than two weeks of lead time, the word went out on social media and the auditorium at OISE was filled to capacity with about 500 people, many of them travelling from out of town.

When Smoke addressed the crowd, she said she was humbled by the response from the community as drummers, artists, a caterer and several volunteers stepped forward. Volunteers found the venue, set up a Facebook events page and handled ticketing and security.

“This was a community effort,” said Smoke.

A buzz of excitement went through the crowd when Smoke announced that Chief Looking Horse was coming in. He received a welcome befitting a spiritual leader of his stature and people rose to their feet and applauded as he entered the auditorium accompanied by two young women in white buckskin dresses.

Chief Looking Horse has worked for religious freedom, cultural survival and revival and protection of sacred sites. He has travelled all over the world with his message of peace and prayer, meeting other spiritual leaders including the Dalai Lama, making connections between Tibet and the Lakota people.

We are telling the world that Mother Earth is sick and has a fever, Chief Looking Horse said, and he recounted meeting a scientist who talked about global warming and that the world is at the point of no return.

“We, as Indigenous people, we are saying the same thing,” he said. “That what we are faced with in the world today, the direction that we’re going in is not good, that what has happened in the last hundred years, what we have witnessed, it’s not good.”

“The four seasons that we live, we do the ceremonies to maintain that cycle of life, the sacred hoop. The sacred hoop is also, we sit in a circle. There’s no one person higher than the other. But in order to step into that circle, you have to put aside all your bad feelings, your anger, jealousy, and be kind to your body and have a good mind...

“In our sacred teachings of the law of nature, that we are part of this environment, that even the trees have that circle…those are the sacred teachings that came about this environment, knowing that those trees have a spirit. Knowing that the water has a spirit…and that is why the Native American people pray with that water. And today that’s what we want to do is share our teachings. We’re asking all people to come and be a voice, be a prayer for that water.”

Chief Looking Horse said that it was the youth who started the camp at Standing Rock.

“They said, ‘enough is enough’.” They came to stand up for the water of life, to protect the water and they are doing it with prayer. The Elders have told them “no guns, no violence, you stand there in peace and prayer and, so far, we are standing like that today. Mni Winconi. Water is life.”

It was a full evening, with performances by world champion hoop dancer Lisa Odjig from Wikwemikong First Nation and the Manitou Mukwa Singers from Mississaugas of New Credit First Nation.

Elder Jackie Lavallee who did the opening prayer, later led the women in offering a song for the water.

Phillip Cote was the eagle staff carrier and conducted a pipe ceremony at the end of the evening. Eagle Heart Singers and All Nations Jrs. provided opening songs and the honor songs for Chief Looking Horse and his family.

Catering was by Nish Dish and owner Johl Ringuette donated all the proceeds from sales to Standing Rock. Several artists donated pieces to the silent and live auctions.

The event raised $15,675 for Standing Rock, which included a cheque for $10,000 presented to Chief Looking Horse by Lisa Edgar on behalf of Scugog Island First Nation.

More than 100 people lined up after the event to take selfies or have their photo taken with Chief Looking Horse. 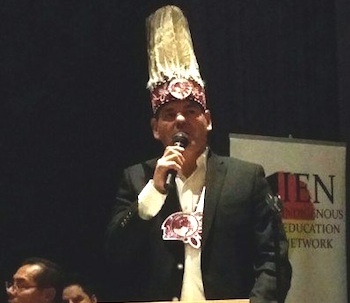 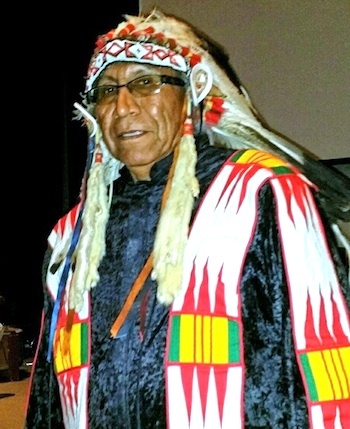 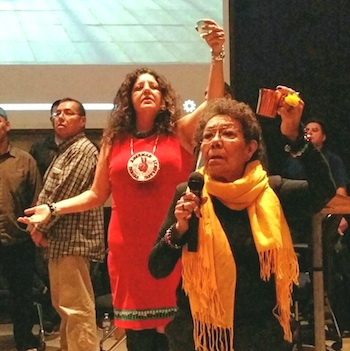