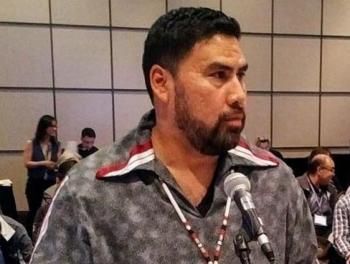 Six Nations of the Grand River Councillor Nathan Wright says the community will reorganize its efforts to convince members to get vaccinated against COVID-19. (Photo via Facebook)

As of Jan. 16, Six Nations has 94 active cases, 292 people in isolation, and seven members in hospital with COVID-19.
By Colin Graf
Local Journalism Initiative Reporter
Windspeaker.com

As COVID spreads through Six Nations of the Grand River, with three new deaths in the last 10 days, elected councillors are working to reset their strategy for vaccinations and other public health measures designed to slow the Omicron variant of the disease.

With only 50 per cent of the population double-vaccinated, Councillor Nathan Wright told council at a recent meeting the southwestern Ontario community “is in a state of crisis” after several COVID-19 outbreaks were declared, including one that claimed a life at the local care home Iroquois Lodge.

Council is starting new measures “to drive those (vaccine) numbers up”, such as deploying the community’s new health bus to give vaccines at multiple locations around Six Nations. It’s Canada’s most populous reserve with approximately 13,000 residents currently living in the territory, and a full population of around 27,000.

“We want to look at the best and safest ways to bring the vaccine closer to you,” Wright said.

Rapid COVID tests are a large part of the new strategy also, he said in an interview with Windspeaker.com. The first shipment of tests has just arrived, with enough for every household.

The first distribution has been planned for Jan. 18 in a drive-through setting. Instructions are being drafted on what to do in case of a positive test result, said Wright. “If you are not vaccinated, we hope you will take a rapid test before going out.”

Another strategy is providing high-quality masks for all residents of Six Nations. These new strategies were discussed in a recent phone call with the deputy minister of Indigenous Services Canada (ISC), who agreed to create an emergency task force with the community, and to provide “additional human and financial resources.”

Wright, who chaired the remote council meeting, said that could include bringing in Red Cross personnel to help at the Lodge, where serious staffing shortages have been occurring with staff isolating due to possible COVID exposure or illness.

The recent deaths bring the total to 18 at Six Nations since the start of the pandemic, and are the first since Nov. 18, 2021, according to a recent news release.

Councillor Wendelyn Johnson told the meeting, Iroquois Lodge managers have even put a call out to the community for people who would be willing to temporarily replace regular staff.

However, Councillor Wright said he has some hope that things “have turned a corner” with staff who were forced to stay home “trickling back” to work now. Out of 30 residents who tested positive, most have mild or no symptoms of the illness.

Communicating the benefits of vaccination and providing up-to-date information of where and how all community members can get it is another area in need of improvement, Wright said. Daily updates by Chief Mark B. Hill or councillors on local radio, written updates delivered to mailboxes at each household, revamping the Six Nations COVID website, interactive Facebook Live updates and Zoom meetings where community members can ask questions of experts and health professionals are all part of the new communications plan, Wright said.

One such session was held as part of the recent council meeting with Dr. Isaac Bogoch, infectious disease specialist with Toronto General Hospital and the University of Toronto.

Speaking to the Six Nations Council and fielding questions from the community, Bogoch said that although the Omicron variant may generally produce less serious illness than the earlier Delta variant “that doesn’t mean it’s not bad. Some people land in hospital. Some are dying. It’s still serious stuff,” he said.

While a smaller percentage of those infected may end up in hospital, with the vastly larger number of infections now happening “that small percentage still ends up being a lot of people,” Bogoch added. That’s why the health system is stretched to its limit now, he explained.

The best thing people can do to protect themselves and others around them is to get the vaccine, he stated.

“All the information from Canada, all the information from every single country around the world where vaccines are being rolled out …has almost identical data,” showing the safety and effectiveness of vaccines, he told the community. Vaccinated people are “way less likely” to end up in hospital or intensive care, or to die from COVID.

Councillor Hazel Johnson asked the specialist about speaking with people from church groups who won’t get vaccinated because “they go based on faith. I’m really not sure how to address that,” she said.

The doctor’s advice?  Point out to them that “every single major religious leader on the planet has come out saying to get the vaccine.” While religious leaders from differing faiths don’t always agree, “they’re pretty much all on the same page with this one,” he added.

Council is not in favour of mandatory vaccinations, “forcing it down people’s throats”, says Wright, but hopes bringing experts such as Dr. Bogoch to help provide “good solid information” will help convince the vaccine-hesitant to get the shot.

“We want to allow people to air their concerns, but also to be open to hear the medical science” he says.

“We have to listen and hear those (who are hesitant) out. In some cases, maybe their concerns are valid,” the councillor suggests gently. Another possible strategy may be public service announcements  that feature respected local leaders and also athletes, such as professional lacrosse players from the community who are vaxxed, Wright said.

As of Jan. 16, Six Nations has 94 active cases, 292 people in isolation, and seven members in hospital with COVID-19.