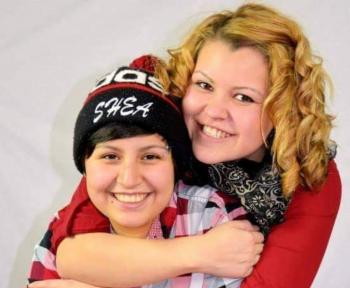 Justice Kent, 24, getting a hug from her sister Mercedes Mwemera, was lost to a heroin overdose in August 2020.

“… baby steps, baby steps. It’s just reaching out to the right people that can bring it back to the people.” — Mercedes Mwemera
By Shari Narine
Local Journalism Initiative Reporter
Windspeaker.com

Mercedes Mwemera doesn’t know what it will take to reach the people in her community of Horse Lake First Nation, Alta. but she’s hopeful that an interactive exhibit called “Somebody's Someone – The Opioid Crisis in Our Community” might make some difference.

She doesn’t want other families to go through what her family has gone through.

In August 2020, Mwemera lost her sister Justice Kent, 24, to a heroin overdose. Justice had tried to break her addiction, relapsed, and took a fatal dose of heroin. No one was with her to provide life-saving measures.

“I’m still grieving. It’s going to be two years since I lost my sister in August. Instead of being so angry and turning to drugs and alcohol, I’m trying to make things better…” said Mwemera, speaking through tears.

“My sister (was) very outgoing, very loving and kind,” she said. Justice was “openly gay.  (She was) just being who she truly is… one-of-a-kind.”

Shortly after Justice’s death, Mwemera organized a walk to bring awareness to substance overdoses, to the flow of illicit drugs in her community, and to those who supply those drugs.

She held a second walk on Aug. 31, 2021 marking International Overdose Awareness Day. She asked others in the community who had lost loved ones the same way to join her. She also had people send photographs of lost loved ones and Mwemera asked people to write letters with memories of the people that were lost, which were delivered to family members.

“The letters were well accepted. A lot of people were crying,” said Mwemera. “Anyone who loses someone because of opioids, you don’t have a chance to say goodbye. They’re gone. Whatever it is you want to say, you beat yourself up or you blame yourself. There’s no actual closure versus someone who passes away with a sickness.”

There’s also not a lot of discussion on Horse Lake First Nation about the opioid problem.

“It’s so shamed upon for you to talk about it. It’s not highly spoken about, but this is something we deal with,” said Mwemera, who is a social worker with the Western Cree Tribal Council (WCTC).

“We’re still struggling from intergenerational trauma. How can we turn it into a positive and healthier way to deal with it? But if we don’t have someone speaking on our behalf, encouraging us to take the right path, we’re just going to go to what we know,” she said.

Mental health is not something people suffering from intergenerational trauma have been taught to consider, she says. Depression exists in every community, but nobody talks about it in Horse Lake First Nation.

Social media doesn’t help the situation either, she points out, noting that her sister was a consistent target on Facebook and other social media platforms.

“Of course, I’m still angry with these people. They don’t know what my sister was doing and they’re addicts themselves. Because they do cocaine, they think they’re better,” said Mwemera.

She also notes that without driver’s licenses or vehicles, people can’t leave the community to seek help elsewhere.

Mwemera is hopeful that the upcoming exhibit will be able to reach members in her community where she was unable to.

“Somebody's Someone – The Opioid Crisis in Our Community” is presented by Family and Community Support Services in the County of Grande Prairie and towns of Beaverlodge and Wembley, along with the Beaverlodge Victim Services Unit Society, Justice for Justice Society, Horse Lake First Nation, Alberta Health Services, Community Foundation of Northwestern Alberta, WCTC, and Northreach.

The exhibit will feature stories of local victims, their families, and first responders.

Mwemera wants these stories to show members of her community that the opioid crisis goes beyond the boundaries of Horse Lake First Nation and impacts everyone.

The stigma remains a barrier to accessing help.

More substance-related deaths were recorded in Alberta during the first 10 months of 2021 than in any other year, according to Alberta Health substance-use surveillance data.

“I’m praying (the exhibit) is going to be bigger (than the walks) because we need to have a voice. We need to know we’re not the only people suffering from opioids. It’s every other culture but because our community is so small it makes it look like it’s all we do. That’s not the intention. The intention is it’s everywhere. But how can we bring that light to the community? That’s the one thing that needs to be done,” said Mwemera.

Mwemera says she is taking her kokum to the Beaverlodge Community Centre, which will be hosting the exhibit from March 2 to March 5, so she can do the “cultural aspect” of praying, smudging and offering tobacco.

“If we can get our foot in the door, with time, baby steps, baby steps. It’s just reaching out to the right people that can bring it back to the people,” she said.

WCTC will be providing naloxone kits and nasal sprays at the interactive exhibit.

Learn more about the exhibit at www.countygp.ab.ca/SomebodysSomeone.