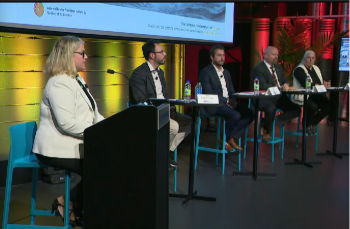 “We don’t advocate for the vote by Indigenous peoples because there’s a diversity of views and positions within our nations…. It’s really a right that belongs to people themselves. They will decide.” — Chief Ghislain Picard
By Shari Narine
Local Journalism Initiative Reporter
Windspeaker.com

Assembly of First Nations Quebec-Labrador (AFNQL) Chief Ghislain Picard is no more at ease now that he has heard incumbent Member of the National Assembly (MNA) of Quebec Ian Lafrenière’s take on Indigenous issues.

The Conservative Party of Québec was too late in accepting the invitation to participate in the debate and could not be accommodated, said Picard.

Each participant was given time to answer questions specific to four topics: governance and self-determination; territories, resources and economy; health and youth protection; and protection of languages and culture.

With Quebeckers going to the polls on Oct. 3, the debate was the first time Indigenous issues were given any real attention, Picard said. He adds that the positions of the parties on the issues did not surprise him.

As far as Picard is concerned, Lafrenière’s answers were a clear indication that a re-elected CAQ government was going to “stay the course.”

“There’s nothing that indicates to me that they’re going to do things differently,” said Picard. “The premier (François Legault) has said a number of times he’s not interested in sitting down with Indigenous peoples to discuss the terms of implementation of the United Nations Declaration on the Rights of Indigenous Peoples. To me a lot of the principles within the United Nations declaration don’t sit well with them.”

Instead, he says, Legault will continue making deals directly with individual First Nations or regional groupings.

Picard also points to Quebec’s “ongoing battle” over federal Bill C-92, which recognizes the authority First Nations, Métis and Inuit have over their own children, youth and families. Quebec challenged that authority and the Quebec Court of Appeal ruled that First Nations laws would not prevail over provincial law if the two conflicted. The federal government is taking that decision to the Supreme Court of Canada in December.

The Quebec government agrees “to the principle of more autonomy for First Nations, but they stopped when we say there’s a difference between more autonomy and full autonomy. This is the kind of playing field they don’t want to go to,” said Picard.

He says Lafrenière spent debate night on the defensive as “the interest focused more on the outgoing government because, obviously, one would tend to look at the record in the last four years.”

One such record-accounting occurred when Kelley, the Liberal Opposition’s Indigenous Affairs critic, called out Lafrenière for having a leader who has had to “excuse himself for saying hurtful things” repeatedly over the past four years.

Kelley’s reference was from the televised debate of party leaders the previous week when Legault said the situation in the Joliette hospital, which led to Joyce Echaquan’s death, had been dealt with. Legault apologized earlier this week for that statement.

In September 2020, Echaquan, an Atikamekw woman, streamed on Facebook Live the demeaning way she was treated by hospital staff before she died. The coroner later ruled that racism led to Echaquan’s treatment, from her initial diagnosis to the way her health care was monitored, and contributed to her death.

Echaquan’s treatment re-opened the discussion on systemic racism and led to Joyce’s Principle, which aims to see all Indigenous peoples treated equitably when it comes to social and health services.

Legault refused to adopt Joyce’s Principle and continues to deny that systemic racism exists in Quebec.

“The situation faced by Joyce and her husband and her family and her community… (that is) systemic racism and there again the outgoing government (represented by Lafrenière) …stood its ground. I didn’t expect them to move away from that. They can be that arrogant, how they position themselves on this very sensitive issue,” said Picard.

This is a battle, he adds, the AFNQL will continue to fight the government on.

That battle will also continue on the French language bill, passed earlier this year, which strengthens the use of French in every aspect of Quebec’s society, particularly business and education.

Indigenous communities have lobbied hard to be exempted from the French-language requirements saying the new regulations will hamper their ability to get services and limit the education of their youth. Their lobbying efforts, including demonstrations, have had no impact.

Picard says Lafrenière continued to brush off community concerns at the debate and was “very evasive on that issue.”

“We told them, ‘That’s not your business. That’s our business. We’ll do it. We only need you to respect it,’” Picard said.

While AFNQL thought it was important to have party representatives speak on Indigenous issues, it isn’t the organization’s intention to convince First Nations people to vote, said Picard.

“We don’t advocate for the vote by Indigenous peoples because there’s a diversity of views and positions within our nations. We have to stay above that. We’re not one to say, ‘You people should go out and exercise that right.’ It’s really a right that belongs to people themselves. They will decide,” said Picard.

“I think … that (CAQ) are somewhat on solid ground in Quebec, because I think it’s written in the stars they will be the next government. I think they’re probably comforted by it and don’t see the need to meet us halfway,” said Picard. But he promises the “battle will be ongoing definitely.”

CAQ came to power in 2018, breaking 50 years of Liberal and Parti Québécois rule in that province.

A new Leger poll indicates that Legault’s party enjoys 38 per cent voter support. Official opposition is almost evenly spread between the other four main parties with Québec Solidaire, Conservatives and Liberals each with 16 per cent, and the Parti Québécois with 13 per cent.