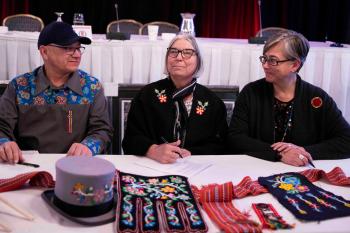 Metis National Council spokesperson David Chartrand accuses the three presidents of attempting to “usurp the powers” of the MNC and says they have “no standing whatsoever, legally, politically, fundamentally” to bring about changes to the MNC.
By Shari Narine
Windspeaker.com Contributor

Three Metis governments in Alberta, Saskatchewan and Ontario are joining forces to collaboratively advance the Métis Government Recognition and Self-Government Agreements each signed with the federal government in June 2019 while calling for changes to the Metis National Council (MNC).

The self-government agreements set out the next steps to formally recognize Metis governments as Indigenous governments in Canada, recognizing their jurisdiction in the core governance areas of citizenship, leadership selection and government operations, as well as processes for negotiating future agreements in other areas of jurisdiction.

“Where we can work together to make that (self-government) work move forward and be really strong we are absolutely going to do that,” said Metis Nation of Ontario President Margaret Froh, adding that their work will also recognize the uniqueness of each Metis Nation.

A three-day event in Edmonton where provincial Metis leaders gathered ended Jan. 16 with the three presidents meeting with Crown-Indigenous Relations Minister Carolyn Bennett. They emphasized their commitment to moving the self-government agreements forward and affirming that self-government and rights-related discussions had to occur between the provincial Metis governments and Ottawa, not through the MNC.

The tri-council also passed a declaration claiming the MNC has become “increasingly dysfunctional” and operating with a lack of transparency and accountability. A connected resolution called for the creation of a working committee to discuss potential reform of the MNC. Both these documents were presented to Bennett.

Froh asserts it was the work of the tri-council that prompted MNC President Clement Chartier to send MNO a letter on Jan. 20 prohibiting MNO from participating in any MNC business.

“I don’t know what’s in (Chartier’s) mind when he writes that letter, but I think the fact it comes on the heels of what was a really amazing week last week bringing together three Metis governments, all of who had signed the self-government agreements, the timing, I suspect, is probably linked,” said Froh.

The letter, said MNC spokesperson David Chartrand, was a follow-up to a November 2018 resolution that put the MNO on probation for one year for not following the definition of Metis adopted by the general assembly in 2002 and attempting to extend the boundaries of the Metis homeland in Ontario. As the MNO did not meet the criteria set out for lifting the probation, it has now been suspended.

Chartrand accuses the three presidents of brokering a “backroom deal” with their meeting last week and not keeping their respective councils informed nor allowing their membership to vote on the declaration or resolution.

“They knew very well what was happening and were very supportive of it,” she said.

“We’ve been engaging with our people… and we’ve been doing that on a regular basis,” said Metis Nation-Saskatchewan President Glen McCallum. “(But) when we get to the point of really moving the files we can’t keep moving back and forth (to the citizenship).”

McCallum points out that everyone sitting on the council has been elected by the citizenship.

Chartrand accuses the three presidents of attempting to “usurp the powers” of the MNC and says they have “no standing whatsoever, legally, politically, fundamentally” to bring about changes to the MNC.

“We are part of MNC. If there are things wrong, as in anywhere, people would say, ‘Let’s get together and let’s fix it.’ That’s what I’m hoping MNC would do themselves. Not us have to ask,” she said.

“From my perspective, having a national body for the Metis, I think, is a really important thing … It’s very valuable,” said Froh.

However, says McCallum, MNC as it is now isn’t doing its job. He points out that when MN-S had internal difficulties and its funding was cut-off in 2014, work was undertaken to re-order that organization. McCallum’s election as president in 2017 coincided with funding being restored.

“What I can tell you (is) as long as somebody doesn’t represent me the way I want to be represented in Saskatchewan then I go with a good way which is dealing directly with the federal government and signing co-governance agreements with the majority of the provinces that agree this is a good agreement for our provinces to sign with the federal government and move our files forward,” he said.

Poitras says the tri-council is not a formal organization, but she hopes the gathering of the three Metis governments acts as a “wake-up call” to the MNC.

While no date has been set for the next meeting of the tri-council, Froh says it will happen soon.

“We want to keep the momentum. We want to keep moving all of this work forward,” she said, noting there is some level of urgency with the uncertainty of a Liberal minority government. “But (we) also have to make sure we do it in a really good strong way which also requires some patience. But moving forward is the only option we have.”