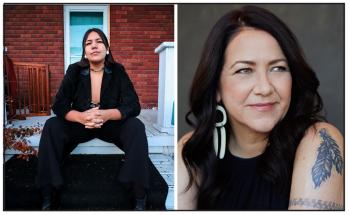 Victoria Anderson-Gardner, the Glenn Gould Protégé Prize recipient, and Terril Calder, the producer of Seeds: The Art of Alanis Obomsawin, a light and sound show.

“They had no other choice but to pick her because she's extremely extraordinary.” — filmmaker Terril Calder
By Adam Laskaris
Local Journalism Initiative Reporter
Windspeaker.com

Victoria Anderson-Gardner, a recent Bachelor of Fine Arts graduate of the School of Image Arts at X University, has been chosen by Alanis Obomsawin to receive the Glenn Gould Protégé Prize, which goes to an outstanding young artist named by the Glenn Gould Prize recipient.

“It was really encouraging for my career,” Anderson-Gardner said in an interview with Windspeaker.com “I think being in film you always kind of are iffy—if you will actually go anywhere in your career. And so, it really shows that I was being recognized for the work that I was doing and people were seeing it.”

Anderson-Gardner is from Eagle Lake First Nation and will be awarded $15,000 as Obomsawin’s protégé choice.

Obomsawin was inspired by Anderson-Gardner’s short film Becoming Nakuset, which won the Best Short Film and the Audience Choice Award at imagineNATIVE 2020.

"Upon watching the work, I was very moved and impressed with how professional and serious Victoria was,” Obomsawin said in a press statement. “I was touched and happy to see the responsibility in such a young person, and how Victoria was really listening to Nakuset in Becoming Nakuset. This is work that is worth being recognized and encouraged.”

Anderson-Gardner has big ambitions for their career, including working as assistant director, researcher and story producer on the Crave docuseries Thunder Bay that will premiere in 2022. The series is set to feature Anishinaabe journalist Ryan McMahon, who is “on a quest to uncover the truth in the recent deaths of multiple Indigenous people” in Thunder Bay, Ont.

When it comes to writing their own work, Anderson-Gardner’s thoughts are actually focused upwards.

“I want to write a script about an Indigenous crew of astronauts who go to space,” they said. “It's very loose right now. I just really like the concept of space and Indigenous people going into space, just because I don't think that's really been done before.”

Obomsawin, 89, is the first filmmaker to receive the Glenn Gould biennial award that was created to honour artists for their “unique lifetime contribution that has enriched the human condition through the arts.”

Obomsawin will be presented the award, along with $100,000, on Oct. 4 as part of a ceremony at Toronto’s Royal Ontario Museum.

Fellow filmmaker Terril Calder said the decision to pick Obomsawin was a no-brainer, despite the fact that most previous Glenn Gould Prize recipients had been musicians or visual artists.

“They had no other choice but to pick her because she's extremely extraordinary,” Calder said. “Everybody really wanted to... honour her in this way.”

Calder, a Métis artist from Fort Frances, Ont., is producing a light and sound show titled Seeds: The Art of Alanis Obomsawin that will be projected on the Royal Ontario Museum’s facade.

“It was a real opportunity to have a bit of social commentary, as well as honour Alanis as an advocate for change,” Calder said of Seeds.

The show will be projected 170 feet wide by 70 feet tall on the museum facade and allow viewers to experience the audio of the show through their mobile devices.

“I’m trying to make it accessible to all ages, and just make it actually a fun and interesting experience,” Calder added.

Seeds will run nightly at the ROM until Oct. 17 to allow more people to learn about Obomsawin’s life.

“She’s the matriarch of filmmaking,” Calder said about Obomsawin. “She's a huge inspiration not only to me but to many of my peers and colleagues. She has forged a path forward with her brave and extraordinary work that she's produced over many, many years.”

Calder said she’s learned many lessons while being able to work with Obomsawin on the light show, as well as other projects.

“What I've learned lately from her, especially spending more time with her, is that she has so much love, and that she always tries to go about (her work) in a really good way,” Calder said. “I feel really fortunate to not only be an audience member and listen to her talk but now becoming friends with her and just listening to all the wisdom that she is so generous with.”