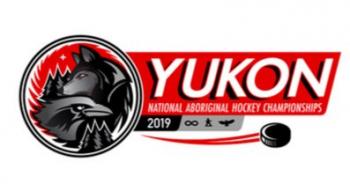 “The tournament has never been held north of 60. I thought that was a really nice touch on our side.” —Michelle Dawson-Beattie, the chair of the 2019 NAHC tournament host committee.

The 2019 National Aboriginal Hockey Championships is still more than nine months away, but organizers of the youth event are busily preparing for what will be a memorable moment in the tournament’s history.

The NAHC has been held annually since 2002, rotating to various centres across the country. The 2019 tournament will be held May 6 to May 14 in the Yukon capital of Whitehorse.

This will mark the first time the event has been staged in one of Canada’s three territories.

Michelle Dawson-Beattie, the chair of the 2019 tournament host committee, felt Whitehorse would be an appealing site.

“When we first started putting our presentation together I was pretty confident we would get it,” she said. “The tournament has never been held north of 60. I thought that was a really nice touch on our side.”

Officials from Saskatoon had also submitted a bid to host next year’s tournament. Another bid was also sent in but after the deadline so it was not considered.

Whitehorse was officially announced as the 2019 NAHC host at this year’s tournament, organized this past May by Nova Scotia’s Membertou First Nation.

Dawson-Beattie expects the same 20 squads to participate at next year’s event. That means more than 600 players will converge in Whitehorse for the tournament.

Matches will be held at a pair of facilities in the city, Takhini Arena and the Canada Games Centre.

“For some of them, this is the biggest scale they will ever play on,” Dawson-Beattie said of the tournament entrants.

Yukon players have traditionally suited up for Team North, which also includes athletes from the Northwest Territories and Nunavut.

There will also be regional reps on Team Atlantic, featuring players from Nova Scotia, Prince Edward Island and Newfoundland.

Meanwhile, Ontario will be sending North and South clubs in both the female and male categories.

And the other provinces expected to ice squads are British Columbia, Alberta, Saskatchewan, Manitoba, New Brunswick and Quebec-based sides called Eastern Door and the North.

Dawson-Beattie, who is also the president of the Yukon Indian Hockey Association, is confident the NAHC will be a success in Whitehorse. That’s because her association has been doing a stellar job running an even bigger youth and adult hockey tournament for the past 41 years. It's called the Kilrich Building Centres Yukon Native Hockey Tournament.

A total of 63 clubs competed in six categories at the 2018 event staged this past March.

“We host this tournament over three days,” Dawson-Beattie said. “I thought we could hit the National Aboriginal Hockey Championships out of the park because of what we already do.”

Organizers for next year’s event revealed their tournament logo earlier this month. A local Indigenous artist, Mark Rutledge, designed the logo with a representation of Yukon’s Wolf and Crow clans as part of the image.

Other preparations are forthcoming.

“We’re going to start working on our website and on putting out a sponsorship package to look for sponsors,” Dawson-Beattie said.

Dawson-Beattie added a number of people have been contacting organizers so they can book their flights to Whitehorse and their hotel accommodations.

For now, she’s asking people to be patient. That’s because organizers are trying to secure discounted flights from Air North, which flies from various Canadian locations to Whitehorse. And they’re also attempting to get deals on hotel rooms.

“We just want to make sure we’re doing everything we can with our hotels and their flights,” Dawson-Beattie said. “We know everybody is on a budget.”

Dawson-Beattie added she is hoping to make a change for the 2019 tourney.

“There is a beautiful carved trophy for the champions,” she said. “But the players can’t pick up the trophy because of their hands and the oils. They can’t touch it. It just sits on a table. They do get medals but I think it would be a nice touch if they would get a trophy that they can skate around the rink with and then be able to keep it and take it home.”

Dawson-Beattie said organizers have yet to discuss the possibility of buying trophies that the two championship teams would get to keep.

“We haven’t gone that far yet,” she said, adding she does plan to bring up the topic at a future meeting for the host committee. “That is just something I would like to see.”