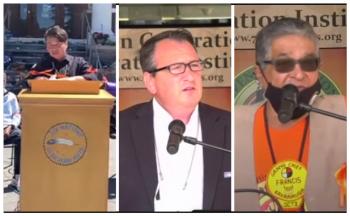 “There is painful but necessary work ahead and we must confront what happened for reconciliation to be achieved.” —Ontario Premier Doug Ford
By Sam Laskaris
Local Journalism Initiative Reporter
Windspeaker.com

The Ontario government has pledged to provide $10 million over the next three years to investigate and help identify, protect and commemorate the residential school burial sites of Indigenous children across the province.

Ford said provincial officials will work in collaboration with Indigenous leaders to see the process is an Indigenous-led one, which also respects the wishes of residential school survivors and their families and the affected communities.

“We will also ensure the appropriate mental health services are available,” Ford said. “There is painful but necessary work ahead and we must confront what happened for reconciliation to be achieved.”

The mental health support services required are included in the $10 million in funding from the Ontario government.

Since last month’s discovery of the remains of 215 children at the former Kamloops Indian Residential School in British Columbia, there have been calls across the country for action to be taken at other former residential schools across Canada to locate undisclosed burial sites.

“It’s important for all Ontarians to be aware of the dark history and painful legacy of the Indian residential school system so that we can work together to build a more equitable Ontario for Indigenous people,” Ford said.

Archaeologists, historians and forensic specialists will be among those assisting with the painstaking work required.

Minister of Indigenous Affairs Greg Rickford said last month’s news from Kamloops was a reminder of the horrific situations that occurred within the Indian residential school system.

“I wish I could say this was an anomaly and such news will never happen again,” Rickford said.

Rickford said work done in Ontario by the Truth and Reconciliation Commission had already identified 12 locations of unmarked burial sites with varying levels of certainty and detail.

“We know there is likely more to this story,” he said.

Rickford realizes difficult times are ahead for many as suspected burial sites are searched.

“We know that these are reopening wounds, some that have never healed, frankly, and bring painful memories to the surface,” he said. “That’s why it’s critical any search and recovery efforts are community led, led by Indigenous people and supported with respectful and respect for community protocols and the diversity of cultural practices across Ontario.”

Rickford said work will commence immediately at some burial sites.

“We anticipate many will want this process to move as quickly as possible, however, we must also ensure that the process is respectful and thorough,” he said.

Rickford said commemoration of remains expected to be found and their sites will eventually be held.

“When we can we will appropriately commemorate these sites and the lives lost and repatriate the remains of children for families to bring closure and move forward should that be the wish of affected families and communities,” he said.

Ogichidaa Francis Kavanaugh, the grand chief of Treaty #3 in northern Ontario, said it’s vital all efforts are done in a way that respects the spirits of the children.

“Many Canadians were shocked, perhaps shamed with the (Kamloops) news and I encourage them to learn about the real history of residential schools and the many other forms of colonial violence inflicted upon our people, starting with the territory they reside in,” Kavanaugh added.

Though he did not attend a residential school himself, Kavanaugh said four of his sisters and one brother did.

“And it pains me to have to relive their experiences,” he said.

Kavanaugh also said it’s important for all Canadians to understand what transpired at residential schools across the country.

“As a society we can no longer hide behind the past or deny the reality of what happened in Canada,” he said. “We must admit the crimes of the past and actively work towards ensuring that it is no longer buried truth.”

“At Six Nations this has been a bitter renewal of grief for all of us,” Hill said of recent news involving residential schools. “We too had our children taken away through a residential school, the Mohawk Institute, also known as the Mush Hole.”

This facility was one of the oldest and longest running of the residential schools in the province.

“The Mohawk Institute was unregulated and unaccountable from the start,” Hill said. “As the TRC said the federal government was responsible for neglecting the health and safety of children. This failure to establish and enforce adequate standards, coupled with the failure to adequately fund the schools resulted in unnecessary high death rates at residential schools.”

Hill also warned there would be businesses and individuals that would seek to exploit First Nations during this period of emotion and vulnerability, so there needed to be protections in place to mitigate that exploitation.

Ontario Regional Chief RoseAnne Archibald, who is seeking the position of national chief of the Assembly of First Nations, responded with a statement to the provincial plans to search grounds of former residential schools.

“I’m grateful the Ontario government is answering my call and the call of all Chiefs in Ontario to provide funding and work in a respectful manner with local leadership and Knowledge Keepers to search the grounds of all former residential school sites in Ontario,” Archibald said.

“Our little ones need to be found, named, and where possible, returned to their families and communities. Memorial sites must go up across Ontario to remind us that we can never let this happen to our children again, ever.”

“Our Nations are in mourning,” said Fiddler, the former grand chief of Nishnawbe Aski Nation.

“Survivors have long shared the truths about the missing children. The province is now listening. Our Nations must lead this important and sacred work with the support from the province. We require access to funding, technical expertise, mental health supports and justice. We want to find our children and bring them home.”