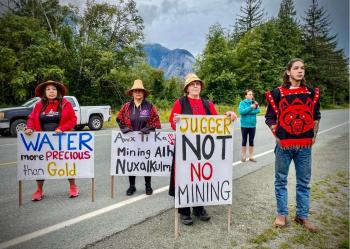 “One only need to look at the Mount Polley Mine disaster of 2014 in our neighbouring territory of the Secwepemc to see the devastation mining can cause.” — Chief Samuel Schooner
By Odette Auger
Local Journalism Initiative Reporter
Windspeaker.com

Notice has been served to Juggernaut Exploration Ltd. demanding it cease mining operations and leave Nuxalkulmc (Nuxalk territory) in Bella Coola, B.C. The eviction comes from both the elected and ancestral governing bodies.

On Aug. 16, two letters were issued. The Nuxalk Stataltmc (ancestral governance) calls for Juggernaut to cease operations, return core samples, and remove equipment. A second letter from the elected chief and council was sent in support of Stataltmc.

“We understand the risks of industrial resource extraction in our territory, especially mining,” said elected Chief Samuel Schooner in a Nuxalk Nation press release. “Any type of mining operation is extremely dangerous to the wellbeing of our territory and our people.”

The Nuxalk Nation has never ceded rights and title to its territory, nor has it entered into any treaty negotiations with the Canadian government.

“At no time has the British Crown, Canada, or the Province of British Columbia ever had jurisdiction over we, the People of Nuxalk,” reads the letter from the Stataltmc.

Juggernaut is a Vancouver-based mining exploration company, which has been conducting test drilling at two sites on Nuxalkulmc lands.

“They are looking for gold and other precious metals and are breaking Nuxalk law,” reads the Nuxalk press release.

The province of B.C. issued Juggernaut permits for two sites that they call Goldstandard  and Goldstar.

On Nov. 16, 2020 Juggernaut Exploration Ltd. received its five-year advanced exploration permit for drilling for the Goldstandard site, and received Goldstar’s on March 11 this year.

Hereditary leadership made it explicitly clear in a May 2020 formal letter informing the province and Juggernaut that Nuxalk did not grant consent to be in the territory.

“We started hearing and seeing the helicopters ramp up, to and fro the past several weeks,” said Nuskmata, Jacinda Mack. That’s when people in the valley, both Nuxalk and non-Indigenous, became activated.

Organizing swiftly, the Ancient Roots Collective, comprised of Bella Coola community members supporting the Nuxalk Stataltmc and the stewardship of the unceded lands of the Nuxalk people, called Nuskmata home to help.

Nuskmata is of both Nuxalk and Secwepemc ancestry. She knows the potential damage from mining, having seen it first hand from the 2014 Mount Polley mine disaster in her Secwepemc home territory.

“A lot of people in the community have said ‘we don't want another Mount Polley.’ We need to get in front of this before it advances to any further stages and we need to be really proactive and let mining companies know that they're not welcome in our territory,” says Nuskmata.

“One only need to look at the Mount Polley Mine disaster of 2014 in our neighbouring territory of the Secwepemc to see the devastation mining can cause,” said Chief Schooner.

Juggernaut is 100 per cent owned, meaning it will be easier for the Nuxalk to target one company versus a syndicate ownership, Nuskmata said.

“But really the fight isn't with the company. It's the province issuing those licenses where they have no authority,” she says.

“With all of the promises for reconciliation and for adopting UNDRIP (the United Nations Declaration on the Rights of Indigenous Peoples) and then continuing to hand out licenses without any consent. And they are trying to make it seem like they followed all of the proper avenues, despite knowing that they have a letter from our hereditary chiefs from last year that explicitly states that there is no consent for mining in our territory.”

B.C. mining law is outdated, she said. In colonial terms it is aligned with the terra nullius (empty or unoccupied lands) premise, said Nuskmata.

“They're archaic, really written during the time of the 1850s, the gold rush.

“So this isn't a new story. We've been dealing with the impacts of the gold rush for the last 170 years. And, this is the same fight, with the new generation picking up the fight, picking up the work.”

Nuxalk leadership has sent out a calls for support from allies, saying they welcome letters of support.