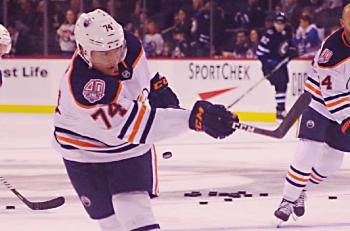 Ethan Bear practices his blast shot during the pregame warmup in Winnipeg. Photo by Marjorie Roden

For the last few games of the Edmonton Oilers’ 2017-2018 season, defenseman Ethan Bear was called up from the farm team to play for the team. He’s now playing strongly in the pre-season and putting his mark on the organization as a #5 ranked Oilers’ defenseman.

Windspeaker.com caught up with Bear Sept. 23 before a road game against the Winnipeg Jets.

Bear said training camp had been treating him well.

“It’s been pretty good; very fun. Just like the other years, you try and play good, and try and stay positive.”

He was equally as positive about the pre-season so far.

“It’s been good. I think I’ve been playing very well,” said Bear. “The team’s been playing good, so the more wins we get, the better it is. It’s been pretty fun.”

When asked about what he might have learned in the 7-3 victory over the Jets on Sept. 20, he said, “Just trying to get into that game mentality. You want to be ready for when the main season starts. I guess you want to get these games in and get your legs in it and get your feet in there, and get focused and stay sharp.”

Bear kept his goals simple when he talked about the upcoming NHL hockey season.

“I definitely want to make the team, for sure. That’s my first goal.”

Bear played with a lot of grit and intensity on Sunday night. At 13:02 of the first period, Bear broke the 1-1 tie with a point shot that handcuffed Vezina Trophy finalist Connor Hellebuyck with a blast from about five feet within the Jets’ blue line. Bear’s goal put the visitors up by one at the end of the first period.

The Oilers came out strong in the second period with long distance passes, but the Jets caught on and cut off their passing lanes. As a result, the energy shifted as the Jets scored two unanswered goals by rookie Skyler McKenzie and a short-handed marker by Mark Scheifele.

The third period saw each team score a goal, making the final score 5-3 in favour of the hometown Jets. But speaking with the Oilers players and coach, the overall mood amongst the Oilers was optimistic.

“I felt good,” said Rookie Kailer Yamamoto, who scored twice for the Oilers. “I’m getting more comfortable every game. I thought our team played good. Just a couple of let downs here and there which might have cost us the game.”

When asked about Bear’s overall performance, Coach Todd McLellan said “He’s been a pretty solid guy. He’s brought some experience in his game. He moved the puck well. He defended well. I thought this was his best exhibition game so far.”

“I thought we played well, honestly,” said Bear after the game was over.

The Oilers will be back in Winnipeg on Oct. 16 to take on the Jets. By that time, both teams will be playing with their final rosters.