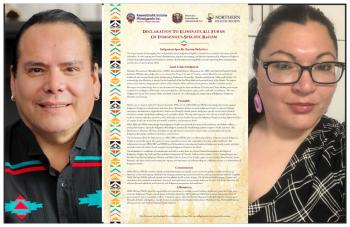 A declaration has been signed on behalf of Indigenous peoples in northern Manitoba to “address the harms (of Indigenous-specific racism) … by changing the systems, organizational structures, policies, practises and attitudes.”

The Declaration to Eliminate All Forms of Indigenous-Specific Racism, which has been in the works for 16 months, was signed by Manitoba Keewatinowi Okimakanak (MKO), Keewatinohk Inniniw Minoayawin (KIM) and the Northern Regional Health Authority (NRHA), on Monday Sept. 26 in Thompson. Manitoba Health Minister Audrey Gordon was among those present to witness the signing.

“We are intending to create a pathway to end anti-Indigenous racism in the healthcare system,” said MKO Grand Chief Garrison Settee.

Settee said that in his position he has heard too many stories of racism experienced by his members, many of which have occurred in the healthcare system. Despite MKO’s attempts to address this racism, it has continued, he said.

Nisichawayasihk Cree Nation Chief Angela Lavasseur, an executive member on MKO, said many members need to travel outside of the community to places like Thompson or Winnipeg in order to get health care.

“When you add Indigenous-specific racism to that process, it can be incredibly traumatizing for our people, and in no way, shape or form is racism necessary and it will no longer be tolerated by our people and by our leaders,” said Lavasseur.

The three organizations have joined forces to address the issue head on and to end anti-Indigenous racism, , said Settee.

The aim of the declaration, said Charlene Lafreniere, member of the Joint Working Group for the Declaration, is to provide “safe, accessible, quality health care that’s racism free.”

This declaration, she said, was guided by the United Declaration on the Rights of Indigenous Peoples; calls to action in the final report from the Truth and Reconciliation Commission on the legacy of Indian residential schools; calls for justice from the National Inquiry into Missing and Murdered Indigenous Women and Girls; the report into the death of Brian Sinclair; and Joyce’s Principle.

Brian Sinclair was left untreated for 34 hours in a Winnipeg hospital emergency room where he died for a treatable infection in September 2008. Staff claimed they thought he was drunk or passed out.

Twelve years later, Joyce Echaquan streamed on Facebook Live the demeaning way she was treated by a nurse at the Joliette hospital in Quebec before she died.

Both Sinclair and Echaquan’s deaths have been attributed to anti-Indigenous racism in the healthcare system.

Both Lafreniere and Lavasseur said a healthcare system which acknowledged Indigenous ways of knowing and healing physically, mentally, spiritually and emotionally was needed.

The declaration calls for space to be made for “Indigenous knowledge (which) is essential for transforming systems to improve health outcomes…(and) values and principles that include…traditional medicines and practises.”

Tools will be put in place to support and implement changes to the healthcare system. There will be semi-annual reporting that will help measure system responses.

Those parameters for measurements are being developed now, said Dr. Barry Lavallee, chief executive officer of KIM. He anticipated the first report to come out in six months.

“Manitoba Health believes that prioritizing the issue of Indigenous racism in the provincial healthcare system with Indigenous leadership and communities can support healing and the spirit and intent of truth and reconciliation,” said Health Minister Gordon.

To build meaningful relationships, Manitoba had to “recognize and acknowledge the wrongdoing of the past,” she said.

The declaration commits the three signing organizations to “address healthcare gaps, barriers and other factors that contribute to individual, structural and institutional racism towards Indigenous People of Northern Manitoba.”