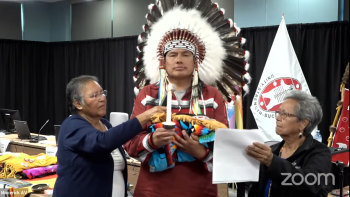 Newly-elected Grand Chief Derek Fox of the Nishnawbe Aski Nation is sworn in at the Fort William First Nation near Thunder Bay, Ont. Fox has been elected to a three-year term as head of the political organization representing 49 northern Ontario communities.

“I acknowledge this is a very sacred role. We have a long line of grand chiefs for many years, and I will not take that for granted.” — Newly-elected Grand Chief Derek Fox
By Colin Graf
Local Journalism Initiative Reporter
Windspeaker.com

Derek Fox is the new grand chief of the Nishnawbe Aski Nation (NAN), elected to replace Alvin Fiddler who has held the post for six years.

Fox won the election 30 votes to 11 for Bruce Shisheesh, a former chief of Attawapiskat First Nation.

Eligible voters were chiefs or their proxies from the 49 communities from across northern Ontario that belong to the NAN, which represents about 45,000 people.

The election was held as part of the 39th annual Keewaywin Conference, taking place virtually this year from Aug. 10 to Aug. 12.

Trained as a lawyer, Fox has practiced civil litigation with a focus on Aboriginal, corporate and commercial law, according to a news release from NAN. He previously had a successful career in major junior and semi-pro hockey, according to a biography on the NAN website. He earned a degree in Political Science and Economics from the University of Manitoba, and then completed his law degree there.

Fox told the chiefs and viewers of the virtual event, held at the Fort William First Nation, adjacent to Thunder Bay, that one of his first priorities will be to “play a huge role” in helping with the search for unmarked graves at the sites of former residential schools.

Describing himself as the child of two school survivors, Fox said he wants to “make sure those who never came home are found and that the families of those survivors find some comfort” in the search process.

He also pledged to “keep a close eye on” the COVID pandemic and help students get back to school safely.

“We are still in the time of COVID,” he reminded the assembly, and that “many students are struggling. They just want to go to school, they don’t want to be cooped up at home anymore.”

Fox said another of his priorities will be to try and visit as many communities as possible to hear from their leadership and the people.

“I want to hear your issues and your vision,” he said.

Promoting the “Choose Life” program that provides services for youth at risk of suicide among member communities is also important to the new grand chief, Fox said. A nation can qualify for Choose Life if the communities have “a pressing need in respect to youth at serious risk of suicide” and a gap in supports, programs and services for those youth, according to the NAN website.

Responding to questions held just before the vote, Fox said he has a vision of a possible territory-wide government one day that would implement self-government under the United Nations Declaration on the Rights of Indigenous Peoples. He also pledged to support the rights of individual First Nations to make their own health care arrangements with the federal government.

Answering a question from Moose Cree First Nation Chief Marven Cheechoo, Fox said he wants to make sure the community’s hospital is not moved. Cheechoo said his nation has had a hospital for 70 years and fears a new health transformation plan will move it to the town of Moosonee.

Leaving the grand chief’s post is Alvin Fiddler, who has held the job since 2015. He ran for the leadership of the Assembly of First Nations in July, pulling out after three ballots to support the eventual winner, RoseAnne Archibald, former head of the Chiefs of Ontario.

Fox concluded his acceptance speech by promising to follow the lead of his people.

“The people of NAN are the voice. It’s important their voices are heard. Over the next three years we are going to work extremely hard. I'm going to ensure I do this with honour and integrity and I acknowledge this is a very sacred role. We have a long line of grand chiefs for many years, and I will not take that for granted.”