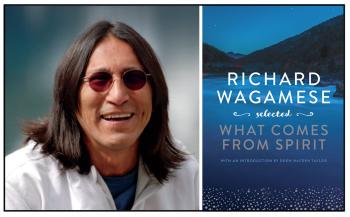 Late Richard Wagamese and the cover of his new book of selected works. Photo by Yvette Lehmann

“There is a hunger for Richard's words which did not end with his life. They inspire endlessly. Richard always had a great connection with his readers.” — agent Chris Casuccio
By Shari Narine
Local Journalism Initiative Reporter
Windspeaker.com

Four-and-a-half years after his death, a new collection of short works by award-winning Ojibway journalist and author Richard Wagamese will be hitting real and virtual bookstores on Saturday.

Richard Wagamese Selected: What Comes From Spirit which comes from the Douglas & McIntrye (D&M) publishing house, is a collection of his unpublished manuscripts, social media accounts, his Word Press blog “World of Wonders,” and his newspaper columns with the Calgary Herald.

“This is an accumulation of Richard’s wisdom and really his teachings, his core beliefs that he never quite drew together in one place before,” said John Pearce, who was involved with Wagamese for move than 25 years, first as publisher and then as agent.

Wagamese wasn’t as well know for his poems and non-fiction as he was for his fiction.

Wagamese passed away in March 2017 in Kamloops, B.C. He was from the Wabaseemoong Independent Nations in Northwestern Ontario.

The decision to move ahead with the posthumous collection with D&M, who published the majority of Wagamese’s work, came about “organically,” said Pearce.

“Unfortunately, he passed away just as (Embers) was coming to stores so he never got to see how well it was received. His literary estate wanted us to publish the follow-up to it right away because there were so many short pieces that it was their hope that we would do a second book. I was just concerned at the time that there wasn’t quite enough for full-length treatment,” said D&M publisher Anna Comfort O’Keeffe.

That wasn’t the case. Work was gathered from both previously published and unpublished sources ranging from 1989 to 2015. It included essays printed in the Calgary Herald from the time of the Meech Lake Accord and the Oka Crisis that Wagamese had collected into the book The Terrible Summer (published in 1996 by now the defunct Warwick Publishing), and also 30 or so pages he wrote for Nine Volt Heart, which he had intended to be a book about music, but never finished.

Once all the material was gathered, says O’Keeffe, there was enough work to fill a second collection.

And more than that, says Pearce, the collection does Wagamese proud.

“This collection certainly is our initiative, but we feel he would have been very happy with it,” he said.

The introduction to the collection is written by Drew Hayden Taylor, another award-winning Indigenous author.

“(Wagamese’s) prolific outpouring of quality storytelling and his unfortunate death have cemented him quite firmly in what I (and to my knowledge nobody else) refer to as the Contemporary Indigenous Literary Renaissance. Novels, poetry, non-fiction . . . he was a master of them all. If his name was attached to it, you knew there was substance behind it. He was an amazing writer, and more importantly, an amazing man. His smile was as bright as his craft,” writes Taylor.

In building on Wagamese’s legacy, D&M has committed 50 cents from the sale of each copy of the first 10,000 books and $1 after that toward the Ontario Arts Foundation in support of the Indigenous Voices Awards.

“He was a big supporter of Indigenous writers, any writers. We decided that it was really important that partial proceeds from the book go to something that would support and benefit the community itself,” said O’Keeffe.

“I think he would have been thrilled about that,” said Pearce. “Richard was always talking to me and others about helping Indigenous writers stake their claim in this country and have their voices heard when they haven’t always been heard.”

Wagamese is probably best known for his novel Indian Horse (2012) which was a CBC Canada Reads finalist, winner of the inaugural Burt Award for First Nations, Métis and Inuit Literature, and made into a feature film in 2017.

O’Keeffe came to D&M in 2013, around the same time Indian Horse became a finalist for the CBC Canada Reads award.

“It was doing very well, along with a lot of the other books by Indigenous writers. This is something that is of national interest. It fits in our mandate so we continue to invite submissions from Indigenous authors. They or their agents submit a book to us and … when we’re lucky enough to get them we’re really happy to publish Indigenous authors because we know its something Canadian readers want and that’s important,” said O’Keeffe.

“There is a hunger for Richard's words which did not end with his life. They inspire endlessly. Richard always had a great connection with his readers,” said Chris Casuccio, who joined Pearce as Wagamese’s agent later on in the writer’s career.

“Richard worked hard to formalize his internal feelings when writing novels. He believed the spirit passed through him. His job was to keep the fire alight and focused in one place. This book breaks with that formal shaping, and what is left are his musings, his observations, his inspiration. The core from which he built his fire; what comes from spirit,” said Casuccio.

While there are no plans for another collection of Wagamese’s work, Pearce said, “We have to feel he would be happy and that could be all there now is. We just don’t know.”