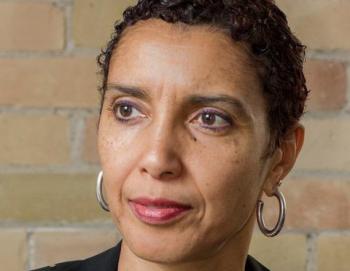 Cassandra Dorrington, president and CEO of the Canadian Aboriginal and Minority Supplier Council

“The pandemic’s disproportionate effects on minority-owned small businesses are a reminder that we are not all on equal footing.” — Kevin Garcia, the head of diversity and inclusion at Futurpreneur
By Sam Laskaris
Local Journalism Initiative Reporter
Windspeaker.com

The Canadian Aboriginal and Minority Supplier Council (CAMSC) has had its share of success since it was founded almost two decades ago.

And now thanks to a new partnership announced this past week, CAMSC officials are anticipating future growth.

CAMSC, established in 2004, is a not-for-profit organization that prepares and certifies Aboriginal and minority-owned businesses to bolster their procurement opportunities with provincial and federal governments, as well as corporate organizations.

CAMSC will now also benefit from a new partnership with Futurpreneur, which was publicly announced on Sept. 24.

Futurpreneur is the only national non-profit organization in Canada that provides financing, mentorship and resources to young entrepreneurs.

The new partnership will not only result in additional mentorship opportunities, but also foster a more inclusive supply chain, according to CAMSC officials.

Cassandra Dorrington, CAMSC’s president and CEO, said discussions about creating a partnership with Futurpreneur had been occurring for quite some time.

“It’s been at least a year-and-a-half,” she said. “We always felt the value of both organizations coming together.”

One of the goals of the partnership is to develop a list of volunteer mentors who will help provide not only business advice but support and encouragement to young entrepreneurs.

CAMSC currently has more than 100 corporations as members and has facilitated about $7 billion in spending since its inception. It also has 450 suppliers as partners. About another 100 suppliers are in the process of becoming certified.

Kevin Garcia, the head of diversity and inclusion at Futurpreneur, believes the new partnership with CAMSC is a significant one.

Garcia said Futurpreneur formed its own diversity council last year, partly in response to the global protests that were held following the death of George Floyd, a Black man who was murdered by a police officer in Minneapolis.

“One of the things we decided to work on was partnerships, having opportunities internally and externally,” Garcia said.

The partnership with CAMSC is not the first one Futurpreneur has engaged in this year.

A Black entrepreneurship program was launched earlier in 2021. Futurpreneur is working with various Black organizations with that program, which is funded by RBC.

“You have to start somewhere,” Garcia said. “The world is really broken.”

Garcia said Futurpreneur is committed to having long-lasting relationships with other minority organizations.

“As we grow, we’re going to learn from these partnerships,” he said. “We’re not satisfied with just checking a box.”

Garcia said stats have proven that some businesses have suffered substantially more than others during the COVID-19 pandemic.

“The pandemic’s disproportionate effects on minority-owned small businesses are a reminder that we are not all on equal footing,” he said. “Helping diverse businesses grow and succeed, especially through the effects of COVID-19, is not only a priority for both Futurpreneur and CAMSC, but also part of a commitment to enrich the communities they represent across Canada.”

Though its partnership with CAMSC was announced this past week, Futurpreneur has already had its own established Indigenous Young Entrepreneurs program.

This program is geared towards Indigenous entrepreneurs ages 18 to 39 who are looking to either launch or buy their own businesses.

Those in the program can receive up to a maximum of $60,000 in financing. They also have access to resources, as well as a mentor for up to two years.

Noah Wilson, a member of Peguis First Nation in Manitoba, is one of four individuals who make up the support team for Futurpreneurs’ Indigenous Young Entrepreneurs program.

Wilson is a member of Futurpreneur's Diversity and Inclusion Council.

“He is invaluable in helping us to understand and to grow,” Garcia said, who is head of the council.

Wilson will be hopping on Instagram Thursday, Sept. 30, to discuss Futurpreneurs’ efforts. Thursday marks the National Day for Truth and Reconciliation in Canada, which encourages people from across the country to reflect on the legacy and impact of the residential school system.

Wilson will discuss how steps can be taken towards truth and reconciliation.

Those who visit the organization’s Instagram account @futurpreneur will see Wilson and other members of Futurpreneur’s Indigenous young entrepreneur support team offer their thoughts on how the organization is faring with its truth and reconciliation efforts.