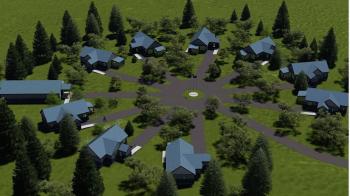 The nine-unit seniors complex is located in the historical Metis community of St. Laurent, Man. — Will Goodon, MMF minister for Housing and Property Management

“As soon as we announced it there was a huge response from folks in the community. We have people on the waiting list already.”
By Shari Narine
Local Journalism Initiative Reporter
Windspeaker.com

In the next week or so, seniors will be taking up residence in the first housing complex built for them by the Manitoba Metis Federation.

It is only fitting that the nine-unit complex be located in the historical Metis community of St. Laurent, one of the parishes that was involved during Louis Riel’s provisional government.

“The people who are living there (in the senior complex) all have roots there or were living there … in older homes not quite up to standard. We wanted to make sure our seniors lived in good quality, high standard homes,” said Will Goodon, MMF minister for Housing and Property Management.

Funding for the Frank Bruce Metis Seniors Complex (named for a Metis Second World War veteran from St. Laurent) comes from the $500-million Metis Nation Housing Accord signed with the federal government. Funds were allocated in the 2018 budget and will be meted out over 10 years. The MMF, the Metis Nation of Alberta and Metis Nation-Saskatchewan will each receive 25 per cent of the allotted dollars while Metis Nation Ontario and Metis Nation British Columbia will equally share in the remainder.

Goodon says when they became aware federal funding for housing would be available MMF President David Chartrand met with Metis throughout Manitoba to determine priorities. Affordable housing for seniors ranked near the top.

“Bureaucracy takes some time. It took us almost two years to get that first-year funding so we’re doing a little catch up now, so that’s why we’re getting a lot of projects underway this year,” said Goodon.

However, best intentions were further delayed by the coronavirus pandemic. Construction restrictions and Manitoba Hydro temporary layoffs pushed the opening of the complex back by about a month. Work is still underway with the completion of driveways and the laying of sod. Goodon is hopeful the official ribbon cutting ceremony will be held in July, depending on Chartrand’s schedule.

“As soon as we announced it there was a huge response from folks in the community. We have people on the waiting list already,” he said.

Eight of the nine units are wood-framed at 792 square feet, while the ninth unit is a steel-framed home of 957 square feet. Each home contains two bedrooms and a sunroom; handles instead of knobs on doors, plumbing fixtures and cupboards; front-loading washer and dryer; lower wall plug-ins and light switches; all of which are enhancements to meet wheelchair accessibility. Located in a cul-de-sac formation there is also a common house that will serve as a central gathering place for cultural events.

Goodon says criteria to allocate the homes is based on Manitoba affordable housing guidelines that call for an annual income not exceeding $56,694; 55 years or older; and good credit and rental history. MMF also required the applicants to be Metis citizens with ties to the community.

In a video messages to members in May, Chartrand said, “We will have the cheapest rent, cheaper than the province of Manitoba, so our senior citizens can have their money in their pockets and so they can keep it and we will be there to take care of them.”

MMF’s housing department staff vetted the applications and, says Goodon, none of the applicants were known to the housing staff.

“I heard some stuff, because you have your ear to the ground and you listen to people and there was some questions, like ‘Why this person. Why not that person?’ I had to say, ‘Look, I’m a politician, but we just went by the criteria,’” said Goodon. He added that he had been approached to “push this person or that person” to get accommodations, but reiterated that the criteria needed to be followed.

Goodon says it is the aim of the housing department to be fair in its services, which include providing affordable housing and providing funding for two new programs, the home repairs program and the first time home buyers program. An appeals process allows applicants to argue their case in writing. The appeals panel operates at arms-length and considers appeals that are identified by numbers only and not names.

“We’re trying to learn from the past, learn from others, but we’re probably going to make mistakes along the way. But we’re always trying to do our best and protect our money that is for Metis citizens. It’s theirs and we want to make sure we’re investing in the very best possible way,” said Goodon.

More new housing investments are being considered. In the works, says Goodon, is both affordable housing and seniors housing on adjacent lots on land already acquired by MMF in Portage la Prairie.  Goodon says he’s traveling to The Pas next week to have similar discussions there.