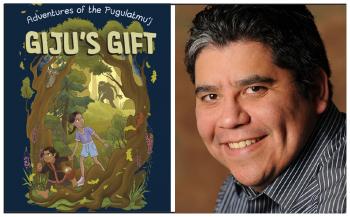 Brandon Mitchell with the cover of his graphic novel Giju’s Gift: Adventures of the Pugulatmu’j.

“I grew up on Disney movies. I grew up on Pixar films. I still watch Pixar films and they are like the gold standard when it comes to storytelling. They write for a general audience, and that’s how I try to approach my storytelling.” —author Brandon Mitchell
By Adam Laskaris
Local Journalism Initiative Reporter
Windspeaker.com

Brandon Mitchell, the author of Giju’s Gift: Adventures of the Pugulatmu’j, a graphic novel aimed at elementary school readers, is eagerly awaiting the book’s official publication.

“I'm super excited for this to come out,” Mitchell said in an interview with Windspeaker.com. “It feels so surreal that it's fast approaching.”

The book, published by HighWater Press, hits shelves on Feb. 22.

In the 88-page book, a young Mi’kmaw girl named Mali meets Puug, a Pugulatmu’j (Little People, the traditional land guardians). Puug has stolen the hair clip that giju’, meaning grandmother, had given Mali.

Puug and Mali go on a series of adventures together, including battling a Jenu, a giant. All the while Mali is looking to have her special hair clip returned.

With delays due to the pandemic, Mitchell said he’d been working on the book for nearly three years.

“I kind of almost forgot how much goes into it,” Mitchell said. “I couldn’t even give you the version numbers I went through. But this has just been such a rewarding experience.”

Those three years writing the book pale in comparison to how long Mitchell had been contemplating the concept for the book.

“This has been an idea that's been germinating for at least 15 years,” Mitchell said. “It was one of those things where I always had it in my back pocket.”

Approached by HighWater to pitch a creative idea, Mitchell said he knew immediately what he wanted to frame the book around.

“I always came back to this idea of having an adventure or a story with the Pugulatmu’j and incorporating the same themes that I incorporated with my previous creative work,” Mitchell said.

“I was honoured to be asked — thankful to be asked — if I had my own creative idea, as opposed to something that was based off of something else. I'm really grateful to have that opportunity.”

At the back of Giju’s gift, Mitchell provides a glossary of terms in Mi'kmaq with their English translations.

“I’ve always tried to incorporate our Mi'kmaq language into my work,” Mitchell said. “l see it as fun and rewarding, because when the kids see our language in stories, they're placing value on our language.”

Mitchell hopes that works like his book can help push readers towards exploring the language further.

“My goal is that it's going to encourage kids to realize the value of our language and learn it and use it,” he said.

While Mitchell is now based in Fredericton, the book’s setting is the area around his home community of Listuguj, Que., a First Nation located north of the New Brunswick border.

Mitchell said he enjoyed making sure the book's setting was an accurate representation of Listuguj, and one that local readers could identify with.

The book is illustrated by Veronika Barinova, who Mitchell says he has developed a “great “partnership” with.

“I feel really confident whenever I'm writing something that I can hand it off and trust that she knows how to interpret what I'm writing,” Mitchell said.

His own experience studying animation and subsequently working in the field helped build his rapport with Barinova.

“One of the big things that we learned in animation was to be as descriptive as you possibly can when you're writing a script and kind of trust the illustrator,” Mitchell added.

Mitchell said his longtime interest in animation has given him inspiration for his distinctive narrative style.

“I grew up on Disney movies. I grew up on Pixar films,” Mitchell said. “I still watch Pixar films and they are like the gold standard when it comes to storytelling. They write for a general audience, and that’s how I try to approach my storytelling.”

And while Giju’s Gift is yet to be released, Mitchell is already working away at what he hopes to make into a trilogy in the Adventures of the Pugulatmu’j series.

“I just submitted my first draft of the second part of the story,” he said. “If everything goes well, I do have a third part in the outline.”