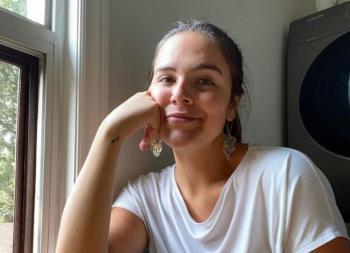 Emma Steen, curator of Locating Self Care in Urban Centres

“What’s within your heart’s mind is how you think of care, which is just so beautiful to me.” — Emma Steen
By Adam Laskaris
Local Journalism Initiative Reporter
Windspeaker.com

Toronto-based curator Emma Steen isn’t overcomplicating the purpose behind her latest show, titled Locating Self Care in Urban Centres. The exhibition is meant to help attendees relax and take care of themselves.

“This is a place to chill, pretty much,” Steen said in an interview with Windspeaker.com.

“I have got a bunch of blankets and tea, and you're just welcome to come in and take them home with you. I'm very into gift-giving, and I wanted to really create a part of the show that would be really tangible.”

Located in the heart of Toronto’s Financial District as part of Collison Gallery’s ArtworxTO Pop Up Hub, Steen’s show contains the work of Indigenous artists Susan Blight and Laura Grier.

The show, which opened in mid-September, runs through Dec. 31 at 18 Wellington St. as one part of a year-long “celebration of Toronto’s exceptional public art collection” run by the City of Toronto.

Grier and Blight consider “self-care as manifested through body, land, and community”. Steen believes then, it’s important to connect with the Indigenous history of an urban space like downtown Toronto.

“I think that since the downtown core is so often viewed as really a concrete area, I think that we often can really fall into thinking more about “untouched areas” or more natural areas as being representative of Indigenous spaces. But it doesn't matter to me,” Steen said. “Whether you're in Scarborough Bluffs, or on one of the rivers, or you're at [downtown Toronto’s King St. & Bay St.], which is where the show is, it's all still Indigenous land and should be treated as such.”

Blight’s work in the exhibit, A Battlefield Medicinal Herb Living Green Under the Snow, features yarrow, a healing root that was taken out of Toronto’s High Park.

Blight chose the root as a metaphor for Indigenous peoples' presence in urban centres—“present, but not always visible at first”, as per the exhibition’s description.

Grier’s work consists of Ɂįdzǝ́Ɂenį Kǝdǝdzǝ́hehtsį which showcases a journey to create a word for “care” in Grier’s Sahtú Kǝdǝ dialect of the Dene language.

Grier settled on a literal translation of a word that loosely translates into “heartmind,” with her work showing the process to create the word on pieces of wood taking “elemental feelings of care.”

“What’s within your heart’s mind is how you think of care, which is just so beautiful to me,” Steen said of the word’s meaning.

A non-status Indigenous person herself who’s a third-generation Torontonian, Steen said she’s “constantly mindful” of the space she takes up as a lighter-skinned Indigenous woman. Steen added that her work as a curator, as well as her work as a Community Relations Manager with the Indigenous Curatorial Collective, helps amplify BIPOC voices which might be neglected or ignored.

“I have a really special responsibility. I walk in two worlds,” Steen said. “All of my responsibility will always be for the community who are going to be targeted before I am; who are going to be harmed before I am. I like to be able to, at least in some small, small way, work hard to make sure that if I can make a few opportunities, or a few people's lives slightly easier in some way. I don't take that lightly.”

Steen hopes that her show will bring to light the issues faced by Indigenous people in Toronto, such as disproportionate amounts of police surveillance and the lack of affordable housing.

“It's not built as a place for people to really be able to thrive always,” Steen said. “It's just so glaringly the opposite of how much Toronto likes to talk about truth and reconciliation.”

Steen referenced the forcible removal of encampments from Toronto’s Trinity-Bellwoods, Alexandra, and Lamport Stadium parks this past summer, which was estimated to have cost more than $2 million.

“I think it really put affordability and lack of access to care or support in the city just present and on people's minds,” Steen added. “I think that this show touches upon these themes and we really talk about and explore how hard Toronto is to live in, and how that is made much more clear by the ways in which the city prioritizes, in my opinion, landlords, police, and millionaire homeowners…  and how folks who do not fall into those categories are kind of left to the wayside.”

Toronto Mayor John Tory, who was widely criticized for his handling of the encampments, was among those in attendance for a press opening of the exhibit this past Saturday.

“I don't think that coming to this show is going to change his actions or anything like that,” Steen said of Tory’s appearance. “But I do hope that it gives at least him the opportunity to really have a small moment of being like, ‘You're not treating Indigenous people very well... You're not making the city easier for Indigenous people or really anyone to live in’.”