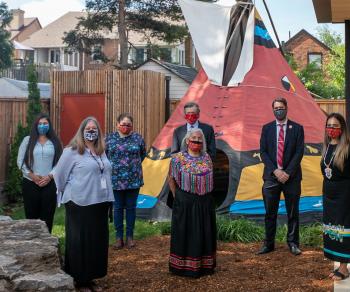 The announcement of the opening of the Mount Dennis Aboriginal Child and Family Centre in Toronto was made June 21.

“As soon as the regulations lift, we can’t wait to open our doors and have you all come in.” — Reta Red Sky Hamlin
By Sam Laskaris
Local Journalism Initiative Reporter
Windspeaker.com

With the opening of its newest centre, Native Child and Family Services of Toronto, an organization founded in the 1980s to address colonization, residential schooling and mainstream child welfare, now has 10 locations throughout the city.

“It is dedicated to their own needs and aspirations and I’m proud of that in the context that it’s something that can happen in our city in a partnership,” he said.

Programs and services that will be offered at the Mount Dennis centre include group and drop-in programs, sharing circles, access to onsite Elders and Knowledge Keepers, ongoing parent and education supports, as well as pre-natal and post-natal programs.

There will also be ceremonies offering cultural teachings, as well as language and community cultural events.

Outdoors, the centre includes play and ceremonial spaces, as well as a medicinal garden, fire pit and a sweatlodge.

Among those who provided funds for the multi-service centre are Indigenous Services Canada, the Ontario Trillium Foundation, Aboriginal community councils and the City of Toronto Children’s Services.

Tory said the city has been a long-time supporter of Native Child and Family Services of Toronto.

“There’s a deep and long-standing relationship in place and we hope it remains in place for many, many years to come, that allows projects like this to become reality,” he said.

Tory said working alongside Indigenous partners has enabled various projects, including the city’s newest Indigenous centre, to come to fruition.

Nunziata mentioned the recent discovery of remains of children in unmarked graves who attended a former residential school in Kamloops, B.C.

“Looking forward we need to focus on healing and supporting closure,” she said. “We must continue to ensure programs that are intended to support Indigenous communities are Indigenous led and community based.”

The opening of the Mount Dennis facility comes just two months after Native Child and Family Services of Toronto had opened another centre, the Malvern Aboriginal Child and Family Centre, in the city’s east end.

In a video shown at Monday’s virtual opening, Knowledge Keeper Alita Sauve addressed the importance of the new facilities.

“I think what’s exciting and most important about the news hubs is that time was taken to engage community to find out what they felt that they needed in their community,” Sauve said. “This isn’t something that was imposed upon us once again.”

Schiffer said consensus among community members was that another location with a multi-service space, not only where children can come and learn but also one that provided a location for food security, youth services and ceremonies for culture was necessary.

“Creating new spaces for Indigenous community where there has not been services before ignites my spirit,” Schiffer said.

Reta Red Sky Hamlin is serving as the supervisor of the Mount Dennis centre. She is proud of the variety of services that will be offered through the centre.

“This new multi-service centre will have several services, including programming for early years, youth, senior Elder wellness programs and all-inclusive welcoming spaces that support their well-being, enriches their cultural knowledge and provides opportunities to strengthen relationships,” she said.

Though only virtual programming is currently available because of the COVID-19 pandemic, Hamlin is hoping that changes relatively soon.