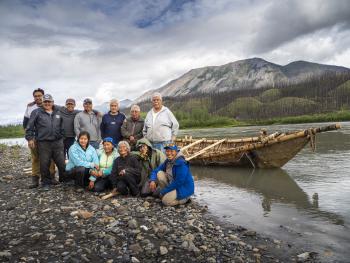 From the film Nahanni River of Forgiveness

“It was more like the story itself was alive. It wanted to tell itself.” — Herb Norwegian
By Sam Laskaris
Local Journalism Initiative Reporter
Windspeaker.com

It took several years for his idea to come to fruition.

But Herb Norwegian, the Grand Chief of Dehcho First Nations in the Northwest Territories, is thrilled a documentary he inspired will be shown nationally.

Norwegian met Toronto director Geoff Bowie back in 2005 while he was working on another film project in northern Canada.

Norwegian felt a film recreating Indigenous life from more than a century ago would make for a moving film.

During the 1800s, the Dene of the Northwest Territories would embark on a 500-kilometre journey up the Nahanni River to spend their winters on their hunting grounds.

Then, each spring, the Dene would construct moose skin boats and make the challenging trek back home by the river.

More than 100 years had passed since those trips were last made. Norwegian felt a film recreating this journey would create an inspiring story.

“I saw what he was capable of doing and I sort of sprung the idea on him,” Norwegian said of his 2005 meeting with Bowie.

“I tried to get it going right away,” he said.

As it turned out, it took about another decade to secure some funding for the film, which was eventually shot it 2018.

The film, titled Nahanni River of Forgiveness, features 12 Dene who recreate the journey of their ancestors. It will make its broadcast premiere on Aug. 9 on the documentary Channel, a specialty channel owned by the Canadian Broadcasting Corporation. https://www.cbc.ca/documentarychannel/

The film has already been shown at a pair of festivals in northern Canada, last November in Yellowknife and this past February in Whitehorse.

Those showings received plenty of positive feedback. Norwegian believes the film will also be appreciated by viewers in the southern parts of the country.

“I would think people will receive it with open arms,” he said. “I think people are starving for this kind of story to be told. This journey is something that is going on with everybody’s life.”

That’s because Nahanni River of Forgiveness is much more than just a dozen people on their quest to paddle a route of their ancestors with a moose skin boat they themselves built.

It’s also a quest many of them take as part of their own healing and reconnection.

For example, Lawrence Nayally, a radio broadcaster who was among those that took part in the project, candidly details the life struggles, including suicidal thoughts, he has endured.

Rochelle Yendo, who was 19 and the youngest participant when the film was made, talked about her struggles with depression and anxiety.

“Being on this trip, I noticed that I was still hurting because I haven’t let some things go,” she said. “You know, I have to forgive a lot of people, you know, to move on.”

Stories about the Indian Act and residential schools and the impacts on future Indigenous generations are also discussed throughout the film.

“We also wanted to look at the background of this and how it all began,” Norwegian said. “The more and more we talked about it, it got more and more interesting.”

An underlying message of the film is one of hope.

“It was more like the story itself was alive,” Norwegian said. “It wanted to tell itself.”

Norwegian said the ups and downs experienced in the film are feelings expressed by many.

“It parallels peoples’ life along their life journeys,” he said. “I hope people can see that.”

Spots along the Nahinni River include sacred sites. They allowed the Dene paddlers to connect with their roots and find some solace.

“There’s political stories and spiritual aspects and I thought that would be interesting,” Norwegian said.

The fact several obstacles are also encountered during the journey makes for an even more gripping story.

“I think if something surprising happens, that kind of brings out character,” Bowie said. “You see how people behave and react and respond.”

Filming lasted just over a month, in June and July of 2018.

Dehcho Dene members invited some Mountain Dene members to join them on their journey, in large part because the latter have traditional knowledge of building a moose skin boat.

Bowie said challenges began early on when not enough moose hides were available to help construct the boat.

“They had to make the boat somewhat smaller,” he said. “The boat was like 36 feet instead of 42 feet.”

Bowie said incorporating the life stories of those on the lengthy trek is a key component of the film.

“It was always going to be about the people and their stories,” he said. “The pain and difficulties and suffering that have gone on, and is still going on, I think gets reinforced.”