Michel First Nation is without a homeland to repatriate their children 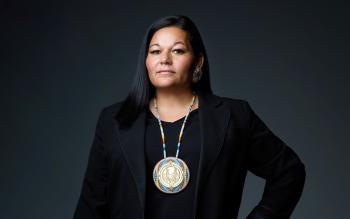 “So the impacts of genocide on us are really raw during this time because we don't have each other. We don't have our homeland to grieve collectively and to plan.” — Jodi Calahoo Stonehouse
By Shari Narine
Local Journalism Initiative Reporter
Windspeaker.com

As probable burial sites of children who didn’t survive residential schools are being identified across the country and discussions of repatriation of their remains take place, Jodi Calahoo Stonehouse feels the pain of it all so very deeply.

A former councillor of the Michel First Nation in Alberta, she’s one among a people without a land.

“I think our loss is… amplified during this process,” said Stonehouse. “The amplification is that we don't have our homeland to come home to, to do ceremony, to grieve, to bring people together. To go through the memories of our relatives, like who didn't come home, who remembers an aunt or an uncle that didn't come home.”

The Michel First Nation has been fighting unsuccessfully for decades with the federal government to be re-instated officially as a First Nation.

Michel’s most recent campaign has come in the form of Michel Band United for Justice, a corporation that's working to build ties with other Treaty 6 nations, the territory in which the Michel band once had land.

Stonehouse points out that Michel is not alone in being dispossessed of its land. The same thing happened to the Sharphead, Bobtail and Papaschase bands.

“So the impacts of genocide on us are really raw during this time because we don't have each other. We don't have our homeland to grieve collectively and to plan. So that impacts not only in the search for our relatives, but not having that safe place to build community, to grieve, really, really hurts,” said Stonehouse.

Stonehouse says children from Michel First Nation attended the Youville Residential School as well as St. Joseph’s Dunbow Industrial School in southern Alberta. Dunbow was operated by the Roman Catholic church from 1884 to 1922. There is a graveyard on the site and work is actively underway by a Tsuut’ina archivist to name the children.

In late June, the St. Albert-Sturgeon County Métis community announced its intention to work with Dr. Kisha Supernant, director of the Institute of Prairie and Indigenous Archaeology at the University of Alberta, to conduct research and use ground penetrating radar to locate probable burials at the St. Albert Youville Residential School site and Riverlot 56, adjacent to the Poundmaker Lodge, which was the former Edmonton Indian Residential School.

“Those are also our relatives (in Youville) whose remains will be discovered, so we need to work in partnership. These wounds hurt all of us,” said Stonehouse.

According to the National Centre for Truth and Reconciliation, St. Albert Youville Residential School grew out of a Roman Catholic mission school for Métis children at Lac Ste. Anne Mission in 1859. Four years later it was relocated to St. Albert and operated until 1948.

The Methodist Church operated the Edmonton Indian Residential School from 1924-1967. It remained open one year longer under operation by the federal government.

The St. Albert-Sturgeon County Métis community, a local chapter of the Métis Nation of Alberta, has committed to working with the impacted First Nations.

“In the coming weeks and months, we will be approaching local First Nations leadership to discuss how best we can work together to ensure our First Nation and Métis children are identified and honoured. We will collaborate to create a lasting legacy,” it said in a statement on June 30.

While the local Métis community will be able to apply for funding from both the federal and provincial governments to cover at least partial costs of the work, that option isn’t available for Michel First Nation.

Stonehouse says funding won’t come from the federal government as Canada doesn’t recognize Michel, and she will have to check on the criteria set by the province. At the end of June, Alberta announced $8 million to support community-led research into undocumented deaths and burials in residential schools.

One thing Stonehouse does know – and her concern has been vocalized by numerous Indigenous leaders – is that the funding will not be adequate.

“For me it’s very problematic, the whole issue, that we’ve known,” she said referring to the work of the Truth and Reconciliation Commission as outlined in a chapter on missing children from residential schools and burials in its 2015 final report.

Canada had six years “and didn’t create a plan to do this in a loving, respectful way, and whatever funding is allocated is not going to be enough and they need to do more,” said Stonehouse.

“The Canadian state should have taken action with our leadership long ago to prepare transition processes through ceremony, through rights of passage or whatever each nation needed. It should have and could have easily created a strategy,” she said.

Instead, Indigenous leaders are left to provide comfort in what is “a traumatic and re-victimizing experience to oppressed and marginalized people.”

Stonehouse would also like to see Canada and the churches held accountable, with criminal cases and justice pursued at these burial sites. Earlier this week, the Manitoba RCMP revealed that for over a decade they have been investigating sex abuse allegations connected to the Fort Alexander Residential School in Sagkeeng First Nation.

“We have tragedy like these graves being uncovered. Our relatives didn't come home too. We don't have a home to bring them back to…. So our energy is definitely going into seeking justice. But I think now is the time where we also have to come together and plan a feast. We need a place and space,” said Stonehouse.

She said Michel First Nation needs “to bring our love and energy and our strength together to unify, to respect each other and to honor those loved ones that we've lost, in the spirit of our ancestors with kindness and warmth.”