Métis Nation BC citizens in turmoil over removal of president 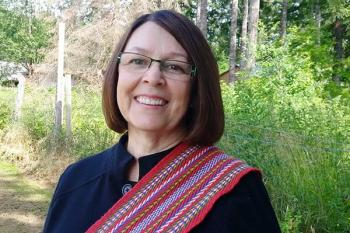 “Our next steps are to settle these items in (the BC) Supreme Court.” — Christopher Yates, secretary-treasurer for the West Kootenay Métis Society
By Shari Narine
Local Journalism Initiative Reporter
Windspeaker.com

The battle to protect the right of Métis Nation British Columbia citizens to elect their president—and have her remain in that position—could be fought in the BC Supreme Court.

“People are scared. They voted Clara (Morin Dal Col) in a short four months ago, democratically, and now she’s been removed from her office,” said Christopher Yates. He has promised to take the issue as far as he can go now that resolutions he put forward to be considered for the upcoming annual general meeting have been shot down.

On Jan. 19, MNBC board of directors issued a statement saying they had voted to suspend Morin Dal Col effective Jan. 18 due to her “recent contravention of the Oath of Office, and the breach of our policies and procedures…” Vice-President Lissa Smith was directed to serve as acting president.

Yates, secretary-treasurer for the West Kootenay Métis Society, had hoped to have his 10 resolutions hit the floor for discussion and to be voted on at the Feb. 18 to Feb. 20 AGM. The first resolution called for the reinstatement of Morin Dal Col and the remaining resolutions named each executive member and called for their removal.

While resolutions from citizens are not referenced specifically in the MNBC bylaws, they are included in the BC Societies Act. And it’s through the Societies Act that Yates finds his resolutions excluded.

He said he was told earlier Feb. 4 that his resolutions don’t meet the requirements of Sect. 81 of the act, which says that for “members to put forward proposals for consideration at the next annual general meeting” they must have the signatures of five per cent of the membership. According to the MNBC website, there are 20,000 registered MNBC citizens, so Yates would require 1,000 signatures.

That ruling blindsided Yates since he said he worked with MNBC general legal counsel Christopher Gall on the resolutions.

“I even put a draft sent in over a week prior that he made me fix deficiencies. At no time did he mention Sect. 81,” said Yates.

“MNBC counsel is obliged to give good and prudent information to us, the directors of our communities. To change the goal posts over a week after our first filing only takes away our voice,” Yates said.

In an email interview with Windspeaker.com, Gall said he received through courier Yates’ resolutions and additional signed copies from other citizens, none of which met the five per cent threshold.

Gall said he sought an opinion from outside counsel before informing Yates that his resolutions did not meet the requirements.

“My point is that the Societies Act lays out numerous requirements for member’s proposals,” wrote Gall to Windspeaker.com. “Given the timing, there is not a mechanism under the Societies Act to include them at this AGM. Including them would violate the legislation. That said, there is a close turnaround to the next AGM, which can allow new proposals that meet the requirements under the Act.”

On Jan. 29, acting President Smith further clarified Morin Dal Col’s alleged transgressions in correspondence to citizens, as “contraventions of her Oath of Office, breaching board confidentiality, and bringing the reputation of MNBC into disrepute.” Smith added that the board’s decision was both “legal and constitutional.”

Morin Dal Col’s removal has had a ripple effect, all the way from MNBC citizens to Métis National Council President Clement Chartier.

"This is a blackeye for democracy. As Métis Nation citizens – as would any democratic and free people – we are disgusted by this under-handed attempt to eliminate a rightfully elected leader," said Chartier in a news release issued Jan. 21.

Morin Dal Col was returned as president of the MNBC in a three-way race that saw her garner 45 per cent of the vote last September. Morin Dal Col defeated Walter Mineault, who along with Smith, formed the Mineault-Smith slate of 8. Mineault was the only member of that slate, which included four incumbents, to be defeated.

The MNC news release also noted that neither MNC nor the Manitoba Metis Federation recognized Smith as the new MNBC president. Smith had served as vice-president under Morin Dal Col.

“President Morin Dal Col was recently re-elected by a significant margin as MNBC President on a well-known platform of supporting the decision of the MNC General Assembly to defend the Métis Nation's identity and uphold the suspension of the Métis Nation of Ontario (MNO) for admitting non-Métis into our Métis Nation,” said the news release.

MNO was suspended by letter from MNC’s Chartier in January 2020, though the Ontario organization disputes the authority of the MNC president to do so.

In a statement issued Jan. 27, Morin Dal Col said the remaining executive aims to “reverse MNBC’s support, under my leadership, for the suspension of Métis Nation of Ontario from the MNC for its breach of our Métis Nation citizenship rules.”

That’s a move that Yates doesn’t support, calling it “in essence opening up our registry, threatening every citizen in MNBC, threatening our rights and threatening who we are, our nationhood.”

MNBC Facebook has exploded with discussion over Morin Dal Col’s suspension, the actions of the remaining executive, and the procedures that were followed.

Morin Dal Col stated she has been “flooded with calls and email from MNBC Citizens who are clearly irate over this election overthrow ….”

She also wrote that she had instructed her legal counsel to take “immediate action” to reverse the motion suspending her. CBC has reported that Morin Dal Col filed a lawsuit Feb. 3 against the nine board members who voted to remove her. She is asking the court for a declaration that she continues to hold the office of president, alleging that nine board members took "unlawful actions" to remove her.

According to MNBC bylaws, “A Director shall be given notice of any proposed resolution to remove or suspend that Director and he or she shall be given an opportunity to speak to the Board of Directors or to the Society Members in attendance at an AGM or (special general meeting) where the removal or suspension will be subject to discussion and/or vote.”

The proposed agenda for MNBC’s virtual AGM does not include a statement from Morin Dal Col nor discussion of her suspension.

A petition on Change.org reaffirming Morin Dal Col as president has 556 signatures, more than half of the targeted 1,000.

“Our next steps are to settle these items in (the BC) Supreme Court. As (the executive) ignored a formal request for an emergency (Métis Nation General Assembly) by the presidents, they refused (a Regional Governance Council) and stated they aren’t mandated to meet,” said Yates.

“They ignored or declined all avenues of redress, including Elder mediation, healing circle, proposed resolutions to take everything to referendum so they can hear and understand the citizens’ voices. All declined or denied. They have taken away our voices completely,” he said.