Making a difference “on the ground” is important, says candidate for national chief 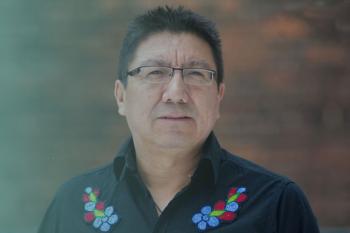 Alvin Fiddler is one of seven candidates running for the position of national chief of the Assembly of First Nations.

“Opportunities for our children, that's something we need to fight for.” — Alvin Fiddler
By Shari Narine
Local Journalism Initiative Reporter
Windspeaker.com

In the midst of the coronavirus pandemic, Alvin Fiddler pulled out his snowshoes and spent hours alone trekking through the bush, thinking and reflecting upon his life and the world around him and the people who were asking him to run for national chief of the Assembly of First Nations.

“The more calls I got like that I really had to think about it. I reflected back on some of the teachings that were passed on to me by my own parents, and one of them was ‘if you're asked to do something, even though it may be hard, you can't say yes or no right away. You really have to give it careful consideration’ and that's something that I did,” he said.

In May, Fiddler announced he would be seeking the position and became the first of seven candidates to declare their intentions.

“For me to put my name forward was just a natural progression of my own journey in my life and the work I've done in the past,” said Fiddler, who has been grand chief of the Nishnawbe Aski Nation (NAN) since 2015.

Before that, he travelled through Ontario with the Truth and Reconciliation Commission, which examined the legacy of the Indian residential schools system, and served as the first executive director of the treatment centre in his home community of Muskrat Dam.

Fiddler believes those roles have taught him the importance of being a good listener and supporting leadership.

As national chief, and understanding that the AFN is an advocacy body and not a rights holder, Fiddler says he would “work very closely with the leadership, ensuring there is capacity at the AFN for the organization to be able to support the work of the leadership.”

“I know there's a balance there. That's something I would certainly strive to achieve in being able to open doors for chiefs to the right minister or the (Prime Minister’s Office),” he said.

Fiddler stressed that action not words is what’s required from the government.

While Fiddler doesn’t believe the AFN has got away from being an advocacy body, he is in favour of continuing the work of the chiefs’ committee for charter renewal.

“If I'm given the honour to be the next national chief I would certainly go back, do that work and make sure that the work carries forward in a good way. Ultimately it will be up to the leadership to approve of any changes to the organization that they want to make, to make it better, to make it more inclusive for everyone,” he said.

For his top three priorities, Fiddler is succinct: “For me it always comes down to three things: It's our land, our children and our future. There are so many issues that you can tag onto those things.”

Investments are needed to begin to bridge the gaps in First Nations communities to impact the quality of life.

“(There’s) desperate need for more resources at the community level to address the increasing gap on housing, access to clean drinking water… issues around infrastructure are so important,” he said.

“Opportunities for our children, that's something we need to fight for. That our children deserve so much and they deserve better and that we need to do everything we can to not only protect them and keep them safe, but to make sure they have every opportunity to succeed is there all their lives. That starts with much needed childcare, early education and goes right throughout their journey,” said Fiddler.

He is also an advocate for the Calls for Justice from the National Inquiry on Missing and Murdered Indigenous Women and Girls. On the second anniversary of the report, he released a statement that, in part, read, “As Indigenous men, we must partner with and support the work (of) leadership of Indigenous women and the work of women-led organizations.” He also believes that the work to implement the 231 Calls for Justice is urgent and that he is “ready to recommit to this work.”

As for the TRC’s 94 Calls to Action, Fiddler says that has been underscored by the many hundreds of remains of Indigenous children recently located in unmarked graves at former residential schools in Canada.

“The trauma, the hurts, the pain that we all felt, I can’t imagine what the families in Kamloops are going through,” he said of the 215 remains found at the former Kamloops Indian Residential School. “(It’s) a reminder of the racist and colonial history of this country and how we all continue to suffer from that,” he said. (Editor’s Note: Our interview with Alvin Fiddler occurred prior to the location of 751 remains at Marieval Indian Residential School at Cowessess First Nation in Saskatchewan.)

“To me, the work that I've done in whatever role that I've had… I've always measured my work by the difference it’s making on the ground in the lives of the people that I serve,” said Fiddler.