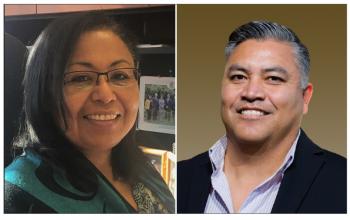 Cheryl Casimer and Terry Teegee sound off on the BC election. Both are candidates seekng the position of regional chief, BC Assembly of First Nations in that organization's election in mid-November.

“There's a fundamental issue with racist policies that really dictate how we're living right now. Once you understand that you can see why there's a lot of systemic issues with racism …. It's everywhere.” — Terry Teegee
By Shari Narine
Local Journalism Initiative Reporter
Windspeaker.com

“We’re not a priority,” said Casimer. She is challenging incumbent Terry Teegee for the position of regional chief for the BC Assembly of First Nations.

Teegee noted Premier and NDP leader John Horgan’s disappointing answer to the question about white privilege. In response to a question to the leaders about their own privileged positions as white people, Horgan answered that he grew up playing lacrosse with Indigenous youth and “did not see colour.”

“We’re living in a world that is, for lack of a better word, developed by a colonial system and there is white privilege and I think it requires, including (for) the premier himself, to have a lot of empathy for First Nations and for minorities to understand the lived experience,” said Teegee.

Immediately after the debate, Horgan apologized for his comment. He said, “I'll never fully understand, as a white person, the lived reality of systemic racism. I'm listening, learning and I'll keep working every day to do better.”

While Casimer says Horgan’s lack of understanding is a “concern to a certain extent” she is heartened by his instant recognition of his failure.

“At least he acknowledged that. It would have been different if he had said he stood by what he had said. At least he’s open to hearing people out, he’s open to changing his views when he’s challenged,” she said.

Teegee says it’s this lack of understanding of “lived realities” of Indigenous, Black people and other minorities that keeps systemic racism alive. He points to the health care system, policing, education and the corporate world where examples of institutional racism can be found.

“There's a fundamental issue with racist policies that really dictate how we're living right now. Once you understand that you can see why there's a lot of systemic issues with racism …. It's everywhere,” he said.

The lack of plans by any of the provincial parties to implement the Calls For Justice outlined by the National Inquiry on Murdered and Missing Indigenous Women and Girls is also a concern for Teegee and Casimer.

“All levels of government need to play a part,” said Teegee.

It is this lack of space for Indigenous issues and concerns during the election that has both Casimer and Teegee encouraging Indigenous voters to mark their ballots.

Casimer says the only way to keep the issues on the forefront is to “get in the face” of the provincial leadership.

“For many, many years we didn't even have the right to vote. We have to take that right seriously and we need to exercise it,” she said.

Teegee is pleased to see at least 10 Indigenous candidates.

In the riding of Skeena, two Indigenous candidates are facing off; Liberal Ellis Ross is trying to keep his seat against the NDP’s Nicole Haulbauer.

Since 2017, Horgan’s NDP had a power-sharing agreement with the Green Party to form the government.

On Sept. 21, 2020, Horgan called a snap election forcing British Columbians to go to the polls during the coronavirus pandemic. Advanced polls run until Oct. 21 and General Voting Day is Oct. 24.