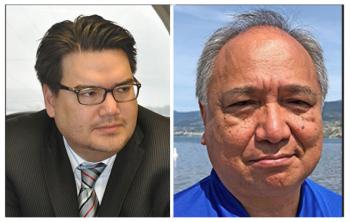 The grassroots-organized National Indigenous Justice Summit was a free-to-attend two-day videoconference held this week that featured speakers from across Canada. Viewership fluctuated throughout the event, but attracted several hundred virtual attendees Tuesday and Wednesday on Zoom.

“Systemic racism is a simple reality of this country,” White said. “It’s built into the foundations of [Canada]. We need leadership of the governments and the RCMP to deeply understand that.”

With recent widespread protests against police brutality occurring across North American and around the world, White and the other participants spoke about why they felt it necessary to come together and hold these discussions.

“This is an issue that is sharply at the attention of everyone in this country,” White said. “We’ve seen our brothers and sisters in the Black Lives Matter movement: Black Canadians and Black Americans who have also been suffering a similar kind of treatment from police and we’ve seen the outrage that’s been expressed across the U.S. and Canada.”

While a variety of viewpoints were expressed, multiple moderators and panellists shared a common persective— Immediate action is necessary to disrupt current practices of oppression at all levels of Canadian policing and justice systems.

The second day of the webinar opened with a keynote address by Marion Buller, who served as the chief commissioner of the National Inquiry into Missing and Murdered Indigenous Women and Girls.

Buller emphasized the need for Indigenous policing strategies to be nuanced.

“We live in a variety of locations and circumstances across Canada,” she said. “There is a great diversity in safety issues, community resources, cultures, languages, practices. There’s not one-size-fits all [solutions].”

“Future abuses of police authority will continue to be documented,” Point said. “We cannot wait until the social fabric of Canada is being literally torn apart.”

Judith Sayers, president of the Nuu-chah-nulth Tribal Council and former chief of the Hupacasath First Nation located at Port Alberni on Vancouver Island, B.C., discussed local approaches to wellness checks as one immediate action that can be implemented.

“Let’s start a campaign to not call 9-1-1,” she said, referencing the recent death of Chantel Moore during a wellness check at the hands of an Edmundston, N.B. police officer. Moore was a member of a Nuu-chah-nulth Nation, Tla-o-qui-aht.

“Of course, we need other teams that can go in… I think we need to put in place community wellness teams and peacekeepers. Let’s make sure these teams are trauma-informed. [Indigenous people] all know the trauma that we’ve gone through. Most police don’t,” Sayers said.

Joseph Murdoch-Flowers, an Iqaluit-based lawyer and former Justice of the Peace Court, expanded on the poor training and education mechanisms in place for police forces, particularly when dealing with Indigenous people.

“It is worthwhile to ask the appropriateness of police responding to mental distress,” he said. “We have to strategically examine the realistic reallocation of resources.”

“We demand that the police act in too many roles — social workers, crisis negotiators, coroners, and more,” Murdoch-Flowers added. “If you spread the resources too thin, you’re going to end up with an inferior service. And that’s not fair to anyone.”

The Action Points also stressed specific changes to the existing court system, including increasing Indigenous representation as “Police, Crown, Judges, police commissions, and within the prison and parole systems” within the next five years, as well as a redirect of “Public Safety” funding to services that increase community safety and help combat social issues such as poverty, substance use, and lack of housing.

More resources about Summit will be found in the coming days at Inidgenousbar.ca, or on the Indigenous Bar Association’s Facebook and Twitter pages. 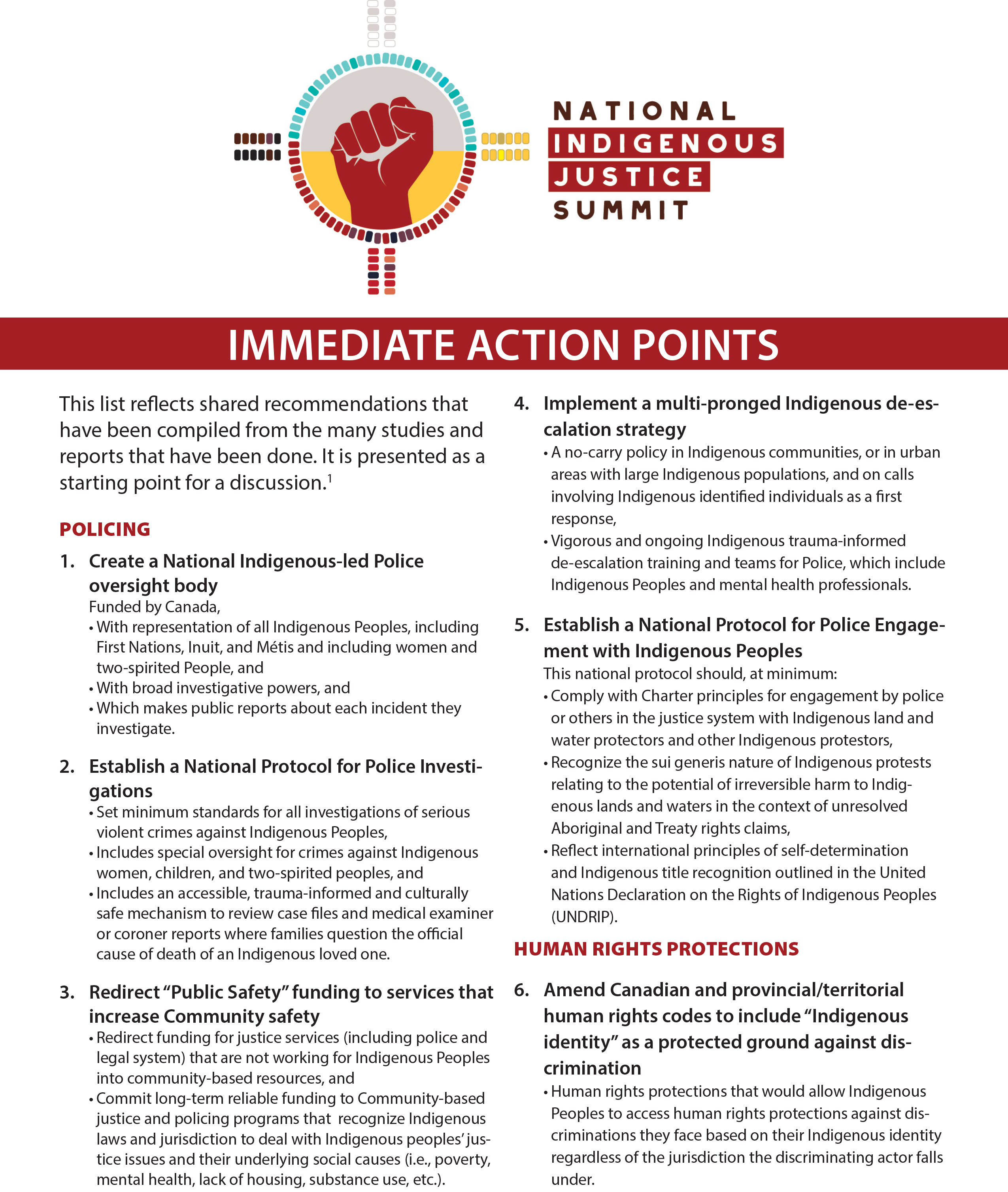 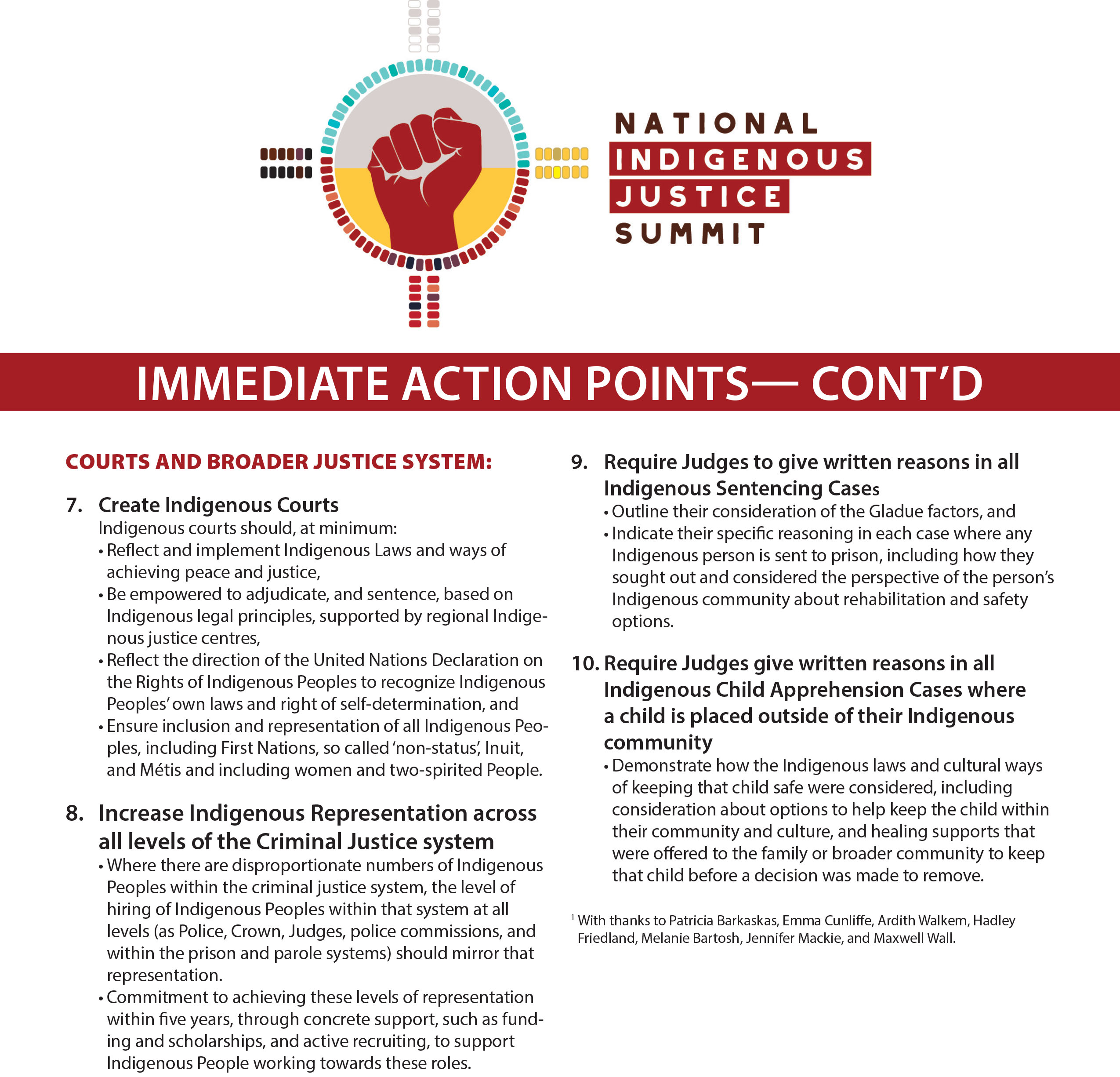