Indigenous thriller Kwêskosîw to screen at two festivals next week 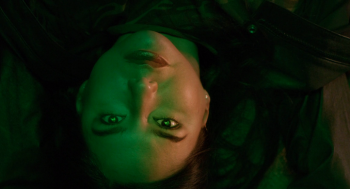 Sera-Lys McArthur plays the main character in Kwêskosîw (She Whistles)

“A 2-Spirit nêhiyaw woman... is on her way to her girlfriend's house one night, and is assaulted by her cab driver. Amidst the struggle, she discovers a deadly supernatural power…” —synopsis of Kwêskosîw (She Whistles)
By Adam Laskaris
Local Journalism Initiative Reporter
Windspeaker.com

The short film Kwêskosîw (She Whistles) is set to premiere at a pair of film festivals over the next week.

Kwêskosîw’s synopsis describes the film as “a dark, supernatural thriller which delves into the issue of missing and murdered Indigenous women by incorporating the mysterious powers within the mystical northern lights.”

The film’s in-person screening at Outfest will take place on Aug. 15 in Los Angeles’ Directors Guild of America. The film will also be available for streaming audiences from next Monday to Wednesday for a price of $10 USD, accessed on 2021 Outfest Los Angeles LGBTQIA+ Film Festival (outfestla2021.com).

Kwêskosîw will also be playing twice virtually at Montreal-based genre film festival Fantasia next week with shows on Tuesday and Thursday evening, both at 9:30 ET. More info about those screenings can be seen on Fantasia Festival at Fantasia Festival | She Whistles.

Fantasia describes itself as a “cultural and professional destination point,” and is celebrating its 25th year.

Eventually, the film will be streamed on Crave in Canada at some point in 2022.

Sera-Lys McArthur, with credits including Monkey Beach, The Corruption of Divine Providence, Outlander, and Burden of Truth, plays the film’s main character.

“A 2-Spirit nêhiyaw woman... is on her way to her girlfriend's house one night, and is assaulted by her cab driver. Amidst the struggle, she discovers a deadly supernatural power that may help solve the mystery of her mother's disappearance,” the synopsis reads.

The film’s creators are aware that the subject matter deals with extremely sensitive topics.

“It's triggering material,” said writer and director Thirza Cuthand during an interview with Windspeaker.com. “But we didn't want people to walk away hopeless or anything. There’s a scene in a cab where the conversation gets uncomfortable... I think we've all had an experience like that we can talk about.”

“It's based on a lot of women's stories, people's stories and experiences, and it gives us the opportunity to bring those to light,” McArthur added.

The base concept of the film has existed in various forms with Cuthand and McArthur throughout the past several years. Cuthand plans to develop the main character’s story into a feature film and said it was a bit challenging to eventually carve the key tenets of Kwêskosîw into just 12 minutes.

“It's just an interesting process to watch your film go through that metamorphosis,” Cuthand said.

“We thought, what's something relevant to both of us that can maybe be tied in to make this a little more of a standalone short without having to explain everything, right? Because there's a lot that you have to get accomplished in 12 minutes,” McArthur added.

Despite the film taking place in rural Saskatchewan, Cuthand said filming took place in Toronto near Cherry Beach. Filming most of the film at night, the crew was able to mask the streets of Toronto for a more nondescript-looking location.

Cuthand, a self-described non-binary Butch boy, is a member of Little Pine First Nation, and was inspired by their days in Saskatchewan while creating the film.

McArthur said there is a wide target audience for the thriller.

“We are definitely trying to reach anyone and everyone who are interested in LGBTQ2S-plus storylines, as well as female-empowering storylines and any kind of social consciousness or social awareness,” she said.

As for the film’s title, McArthur said the inspiration came from traditional lessons taught by Elders.

“Our Elders would often warn us… don't whistle at the Northern Lights, because they'll come down and take you away,” McArthur said.

“Creating the character around my own cultural background means so much to me because I feel even within the space of Indigenous people Nakoda people are often overlooked because we just don't have the numbers,” said McArthur, a member of the Nakoda/Assiniboine Nation.

“It's important to us to still have our identity live on. There's elements of our unique culture and our language that are intertwined into the Rainbow Six Siege character.”