Indigenous players make up half the Maniwaki Mustangs squad 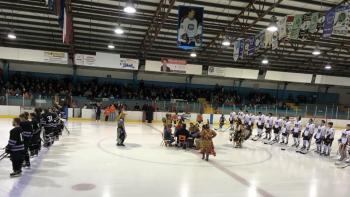 A Quebec-based team with strong Indigenous ties will again be part of a junior hockey league primarily featuring Ontario squads.

This marks the second year of operations for the Maniwaki Mustangs. Maniwaki is one kilometre away from Kitigan Zibi Anishinabeg, an Algonquin First Nation.

The town of Maniwaki was developed on land previously owned by the adjacent First Nation.

The popular Maniwaki Mustangs are gearing up for their second season in the 10-team Canadian Premier Junior Hockey League (CPJHL).

The Mustangs, who drew as many as 1,000 fans to some games in their inaugural season, had the best attendance in the league last year.

Maniwaki is scheduled to kick off its 2018-19 regular season today, Friday Sept. 21, with a home contest against the defending league champion Essa Stallions. The Stallions play their home games in Angus, Ont.

Mustangs’ president Eric Gauthier said more than half of the players on his squad this season will be Indigenous. And a good chunk of the club’s fans are as well.

Maniwaki’s roster includes Indigenous players not only from Quebec but from Ontario and even Nunavut as well.

Mustangs’ head coach Samuel Rivet said a player’s ancestry is not considered at all when choosing the squad.

“We just look at their work ethic,” Rivet said. “(Ancestry) is not something we look at when we’re looking for talent or players that are available.”

The Mustangs’ organization, however, is keen to make its Indigenous players and fans feel at home.

A traditional Aboriginal dance ceremony, performed by members of the Kitigan Zibi Anishinabeg, will be held prior to Friday’s season opener.

The Mustangs also staged a handful of Indigenous dance and drum performances prior to their games last season.

“We show them respect,” Rivet said of the club’s Indigenous supporters. “And for the (Indigenous) players on our team, it makes them feel at home.”

Gauthier also feels it’s important for his franchise to include Indigenous aspects.

“We want to show respect to First Nations,” he said. “And we want to show them we are very happy to have them on our team or supporting our team.”

Rivet added the squad’s Indigenous players do get an initial kick from toiling out of an arena named after Gino Odjick, a former National Hockey League player who is Indigenous and is from Kitizan Zibi Anishinabeg.

“It’s something that they will mention when they first come here that they are in an arena named for somebody who played in the NHL,” said Rivet, a former junior hockey goalie who had his own career cut short by a knee injury. “But after that we will focus on our training.”

Odjick, who racked up a whopping 2,572 penalty minutes while he was in the NHL, also earned 142 points, including 77 goals.

Odjick, who is now 48, was diagnosed with a rare heart condition in 2014 and was expected to live for only a short time. But he’s still alive today.

Rivet said praise from some Indigenous players that were with the team a year ago helped in recruiting efforts this season.

“Some of the (Indigenous) kids have family here,” he said. “That helps us for sure. But a lot of these kids came this year because of what other players were telling them about us here in Maniwaki.”

The Mustangs are one of two Quebec-based franchises in the CPJHL this season. The other Quebec entry is the expansion Shawville Express.

Besides the Stallions, the other squads from Ontario in the league are the Brampton Royals, Coldwater Ice Wolves, Grey Highlands Hawks, Muskoka Anglers, Scarborough Wexford Raiders, Seaforth Generals and Smiths Falls Settlers.

The CPJHL, which is in its third year of operations, is not sanctioned by Hockey Canada. Thus team entries are not permitted to play against squads from other Canadian junior leagues.

The CPJHL is sanctioned by the United Hockey Union, which also consists of the American-based Western States Hockey League.