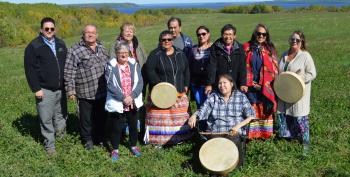 “This is a very emotional and powerful event for many of us here. Our communities have so much trauma and difficult history to deal with and many of our Elders share those stories here as a form a healing for everyone.” —Melissa Gill
By Xavier Kataquapit
Windspeaker.com Contributor

More than 100 participants took part in the gathering where Native language speakers were encouraged to share their knowledge.

The event brought together First Nation Elders and language speakers from the First Nations of Beaverhouse, Matachewan, and Temiskaming, as well as members of the Metis Nation.

They came together for the event with community members and their children to learn the Ojibway language dialects of northeastern Ontario driven by great interest of the First Nations of Matachewan and Beaverhouse.

The gathering was held at a field that offered a picturesque view of Lake Timiskaming just outside North Cobalt close to the old settlement of Mill Creek, which has historic ties to First Nations. This is the second language event to be hosted by the TNWSG with the first held this past July near Kirkland Lake.

“Our goal with these language events is to invite language speakers to spend time with others on the land, surrounded by nature and to speak and share stories around a campfire,” said Anne Batisse, executive director of TNWSG.

“This is how our ancestors learned to speak their language and shared their knowledge. We were very pleased that a long-time supporter of our efforts, Dani Grenier-Ducharme, joined us to share our time devoted to language, tradition and culture.”

Batisse, together with Arlene Hache, Keepers Of The Circle program developer, led the proposal effort to access funding, which was provided through health and wellness programs by the Ontario provincial government. The planning process was also led by an Elders Circle.

The TNWSG works closely with the District of Timiskaming Social Services Administration Board to develop programs and projects that promote culture and language for communities in northeastern Ontario.

Grenier-Ducharme, the district’s Children's Services m,anager explained that his board has been working with the TNWSG under the provincial government’s program Journey Together: Ontario's Commitment to Reconciliation with Indigenous Peoples, which was announced in 2016.

The program was created in response to the Truth and Reconciliation Commission’ final report in June 2015 as an ongoing process that is aimed at addressing the historic legacy of the Indian residential school system in Canada.

“The work that has been done by everyone involved to make projects like this happen has been amazing. I am thrilled at the level of commitment that everyone has provided to make these projects in culture and language so successful. It has been a long journey and I am proud of what we have all accomplished so far,” said Grenier-Ducharme.

“I am proud to say that I am from Temiskaming because projects such as this show who we are and what we represent as peoples and our capacity to organize such beneficial traditional and cultural events.”

The energy, efforts and skills of staff and volunteers from Beaverhouse, Matachewan and the TNWSG combined to provide a venue where Indigenous language was front and centre. The gathering’s lead organizer for the weekend was Melissa Gill of TNWSG.

“This is a very emotional and powerful event for many of us here. Our communities have so much trauma and difficult history to deal with and many of our Elders share those stories here as a form a healing for everyone,” said Gill.

“I feel like I am a walking on air to be here among our Elders and community members. I feel fulfilled and proud to see everyone here wanting to learn more about their language and their culture. Language is only part of our culture. We also share stories, teachings and lessons among one another,” said Elder Oshkabewisens.

A language Bingo that used traditional language and teachings drew many participants and the making of traditional crafts, including shakers and dreamcatchers, provided hands-on knowledge.

The three-day event also featured many opportunities for sharing circles, and fireside gatherings with participants, as well as traditional drumming and singing and modern singing and guitar performances by David Batisse of Matachewan First Nation and Sally Susan Mathias Martel (Marcia Brown-Martel) of Beaverhouse First Nation.

Elder Vina Hendrix of Matachewan First Nation made a great effort to attend the event on a fast flight from her attendance at a cultural and language gathering in Fort Albany First Nation on the James Bay Coast. She is renowned for her knowledge of the Ojibway language, traditions and culture.

“Life is so different up north compared to what we have here in the south. Hearing the Cree speak and use the language while on the land reminded me of what life was like when I was a child and it felt good,” said Hendrix.

“They are more connected to language and the land up there and that is what I would like to see our people move towards here. The gathering we have here is making that happen and I hope it keeps going on. Meegwetch to all the organizers and funders for making this possible.”

The organizers are hopeful that they can turn this into a regular gathering with events that take place during the four seasons and give Elders an opportunity to share stories and activities that go with every part of the year.