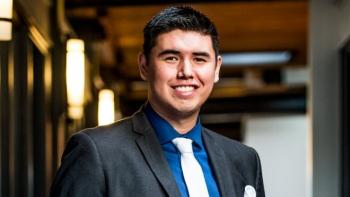 Kendal Netmaker spoke to the Growing The North conference.

“We were secluded and isolated and put in a place where it was hopeless. And oftentimes we still see that manifested in the current realities of our communities.” — Kendal Netmaker
By Sam Laskaris
Local Journalism Initiative Reporter
Windspeaker.com

If he can overcome numerous obstacles while growing up to eventually become a successful entrepreneur, so can others.

Netmaker, a member of Sweetgrass First Nation in Saskatchewan, was a keynote speaker at the Growing The North conference held virtually this past week.

The conference, held annually since 2010, helps municipal leaders and entrepreneurs explore economic development opportunities and look at various innovations in Alberta’s Peace Region and in the northeastern parts of British Columbia.

Various groups, including the Grande Prairie & District Chamber of Commerce, partnered to host the event, which ran Feb. 22 to Feb. 24.

Netmaker’s speech was titled DRIVE!: The Ultimate Resiliency Formula. He incorporated personal details of his life throughout his talk, including the fact he grew up in poverty and was raised by a single mother who had three other children.

This company, which is a lifestyle apparel brand, gives back some of its profits to underprivileged youth allowing them to participate in sports.

In his speech, Netmaker encouraged all to gain as much knowledge as possible.

“As human beings we have so many gifts, talents and abilities but one of the things we lack in terms of investing is what goes on up here, what we put into our mind,” he said pointing to his head.

“What we put into our mind, it manifests into everything physical. Our businesses, our opportunities in the future, how we learn, how we succeed, how we learn from mistakes.

“Everything that is happening in your present moment has come about because of what has gone on up here. And so, as we move about our day, I encourage all of you to be a sponge and take in as much information as you can.”

“If you want to be successful, you have to start thinking more successful,” he said. “Fastest way is you start watching videos. You start listening to audio programs. Download Audible (app) on to your earphones. Listen to programs. Listen to books. Program your mind into thinking positive.”

Netmaker also asked conference delegates to think about their ancestry and lineage.

“I want you to think of what they all went through so that we can have opportunities like we do here today,” said Netmaker, who is also the author of a best-selling book titled Driven To Succeed.

Netmaker, who is married, has two children and now lives in Saskatoon, said his ancestors were not allowed to start businesses, go to school and in some cases even leave their reserves.

“We were secluded and isolated and put in a place where it was hopeless,” he said. “And oftentimes we still see that manifested in the current realities of our communities. When you grow up like that you start to resonate with a lot of that feeling of hopelessness. At least I did.”

He cautioned, however, that speaking to others must be done properly to achieve positive results.

Netmaker also said the world is going through a lot of healing right now. But everybody has an opportunity to be part of solutions that will assist future generations.

“Life is about growth,” he said. “Life is about changes. And the only time growth comes, it comes in the form of an obstacle, a problem, something that is uncomfortable and shakes the world up.